How do I adjudicate the impact radius of the Melf's Minute Meteors spell? [duplicate]

Ask Question
Asked 1 year, 2 months ago
Active 2 days ago
Viewed 671 times
3
\$\begingroup\$
This question already has an answer here:
How many squares on a 5-foot grid does a 5-foot radius spell affect? (1 answer)
Closed last year.

The description of the Melf's Minute Meteors spell states, in part:

[...] you can expend one or two of the meteors, sending them streaking toward a point or points you choose within 120 feet of you. Once a meteor reaches its destination or impacts against a solid surface, the meteor explodes. Each creature within 5 feet of the point where the meteor explodes must make a Dexterity saving throw. [...]

This seems like a fairly easy ruling for when choosing a point, choose a point in between four squares and any creature in those four squares need to make a saving throw like so: 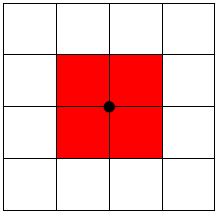 However, how does this interact if if impacts a singular creature in the middle of a square? Does only that creature make it because only that creature is fully within 5 feet, or do the creatures in the 8 surrounding squares also need to make it (reference pics below)? 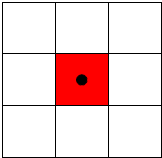 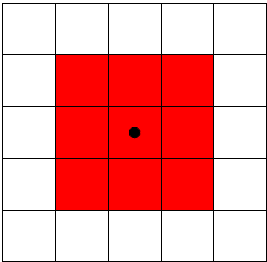 The meteors target a point (or points) and then explode, affecting everyone within five feet of the point - they thus have an area of effect.

When using a tactical map rules variant with area of effect spells, you should select an intersection, not the center of a space, as described in the rules for playing on a grid (DMG 251):

Related: How do I target the Moonbeam spell, using a grid?

Not the answer you're looking for? Browse other questions tagged dnd-5e spells area-of-effect battle-map .

2
How many squares on a 5-foot grid does a 5-foot radius spell affect?
15
How do I target the Moonbeam spell, using a grid?

11
Meteor swarm and mechanics confusion for its effects
4
Could the orbs from Melf's Minute Meteors explode before being launched?
13
Is this the correct way to resolve a missed Ice Knife?
6
What happens if I cast Otiluke's Freezing Sphere while entirely submerged in water?
17
How does the Melf's Minute Meteors spell interact with the Evocation wizard's Sculpt Spells feature?
7
Turning the Mystic's Baleful Transposition into a spell; what level should this be?
3
How many Dex saves does a creature make if it's affected by 2 separate explosions from the Melf's Minute Meteors spells?
13
What does "up to 90 feet" mean in the catapult spell?
8
When using the Wall of Fire spell, what shape is a ringed wall on a grid?