Is it possible to model these probabilities in AnyDice?

I was asked by a pal to help him model a dice mechanic in AnyDice. I must admit I am an absolute neophyte with it, and I offered to solve it using software I'm better versed in. I'd like to be able to help them do this in AnyDice.

The mechanic is as follows:

I searched the AnyDice tag here for questions that might be similar, the closest I found was "Modelling an opposed dice pool mechanic in AnyDice", specifically the answer by Ilmari Karonen.

That question and answer, however, deals with only a single die type.

Can a question like "What are the probabilities of N successes when rolling 4D6 and 6D20 as the player against 6D6 and 4D20 for the opponent?", be handled in AnyDice and produce a chart similar to that below? 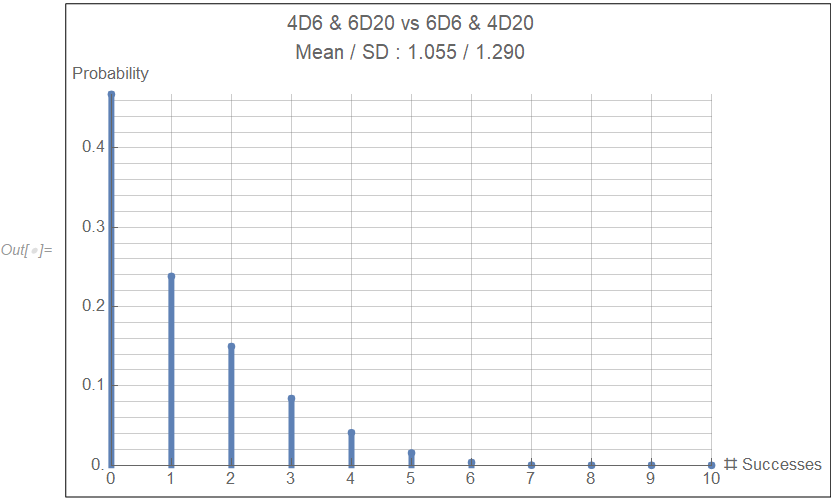 First, we calculate the distribution of the target number and save it in a custom die named TARGET_DIST. We can do that efficiently by taking the highest roll of each type of dice rolled by the opponent (which we can get with either [highest of XdY] or simply 1@XdY) and then take the highest of those using the built-in [highest of NUMBER and NUMBER] function. (If we wanted, we could also define a custom function with more parameters to calculate the highest of multiple numbers with just one function call.)

Once we have the target number as a custom die, we pass it into a function as a numeric parameter (i.e. with :n after the parameter name) to "freeze" it. The reason we need to freeze the target number is because we'll be comparing multiple different sized dice against it, and the probabilities of those comparisons succeeding will not be independent.

Inside the function, where TARGET is now a fixed number instead of a custom die, we can then calculate the distribution of successes for the player's roll against the target number. The most efficient way to do that is to first define, for each die size in the pool, a corresponding custom die with the successful sides (i.e. those above the target number) relabeled as 1 and the rest as 0. We can then just roll the desired number of each of those custom dice and sum the results.

(We could skip the custom die definitions and just write the body of the function more concisely as result: 2d(d6 > TARGET) + 1d(d8 > TARGET) + 1d(d12 > TARGET), but that syntax looks kind of weird and ugly.)

It's also possible to make the function take the dice counts and sizes as parameters, but the syntax gets a bit verbose:

(The reason for including the x's in the function name is that without them, AnyDice with parse e.g. 2 d6 as a single parameter, ignoring the space. And AFAIK there's no easy way in AnyDice to extract the underlying d6 die out of a dice pool like 2d6, so we need to pass the count and the die as separate parameters. Alternatively you could remove the x's and write the parameters e.g. as 2 1d6 or 2 (d6) to resolve the ambiguity, but I don't really think that looks any better.)

Alternatively, you can make functions that accept all dice types and just pass in '0' for those you do not want.

(Credit for this variant should go to Dale M, who added it in an edit.)

Ps. Based on discussion in comments below, it turns out that the slowest part of the programs above is calculating the target value, and specifically the calculation 1@NdY, for which AnyDice apparently uses an inefficient algorithm whose runtime grows exponentially with N.

If you want to use this code with very large opponent dice pools (say, more than about 20 dice of any particular size), it's possible to write a custom recursive function that computes the distribution of the highest roll in the pool more efficiently:

You can use this helper function e.g. like this:

With this modification, the code can easily handle literally millions of dice in the opponent's pool. Note that for pools with 1024 = 210 or more dice you'll need to increase AnyDice's recursion limit above the default of 10, e.g. with:

At this point the player's dice pool size becomes the next bottleneck, but even the unmodified original code above will handle player pools with up to hundreds of dice just fine.

The easiest way to do mixed dice pools in AnyDice is to cast them as seperate sequence inputs into a function, and then stitch the sequences together. Note that you'll have to build the function with a maximum different dice possible, but it is possible to give a 0 or {} if the function has more inputs than your pool.

We can find the maximum by sorting it (putting the highest first in default mode) and taking the first. We can then find the number of values in the other pool higher than it by comparing that number to that sequence. The resulting function is fairly short:

The problem we're running into is that AnyDice has runtime limited to 5 seconds and so this times out with more than 6 dice in the pools total. Given the examples, you're probably better off using a different tool (with higher efficiency/allowed runtime) at least for the larger pools. (Unless of course there is some, more efficient AnyDice method I'm unaware of.)

15
Struggling with rolling for stats probability calculation
9
How should I emulate the highest in an irregular dice pool in AnyDice?
7
Modelling an opposed dice pool mechanic in AnyDice