Does Truesight allow you to see through or behind solid objects?

From what I understand in the references in the MM and PHB to Truesight, it seems that a creature with this sense can see into the Ethereal Plane and see invisible things/creatures. However, does this allow the creature to see through solid rock, e.g. if a PC was out of typical line of sight, with 100% cover, hiding behind a large tree or a stone pillar?

There was some confusion about this in a recent campaign. The way I would interpret it is that having Truesight does not allow a creature to see through objects, e.g. like x-ray vision. For me, seeing the "invisible" does not mean the same as seeing the "non visible".

I would appreciate any RAW answers using 5e literature and/or experience on applying a house-rule regarding this matter.

No, you can't see through solid objects just because of Truesight.

I want to add onto that, however; Xanathar's Guide to Everything features an eldritch invocation for warlocks called "Ghostly Gaze" (p. 56/57):

Ghostly Gaze
Prerequisite: 7th level
As an action, you gain the ability to see through solid objects to a range of 30 feet. Within that range, you have darkvision if you don’t already have it. This special sight lasts for 1 minute or until your concentration ends (as if you were concentrating on a spell). During that time, you perceive objects as ghostly, transparent images. Once you use this invocation, you can’t use it again until you finish a short or long rest.

This invocation elaborately describes gaining the ability to see through solid objects and how you perceive them (as it would be very inconvenient if you couldn't see solid objects at all while using the invocation).

If Truesight were intended to grant the same benefit, we would expect it to have a similarly accurate phrasing. Remember: in 5e, rules only do what they say.

As a sight note, if you want to see around corners or behind solid objects, Blindsight may be what you're looking for:

Blindsight
A creature with blindsight can perceive its surroundings without relying on sight, within a specific radius. Creatures without eyes, such as oozes, and creatures with echolocation or heightened senses, such as bats and true dragons, have this sense.

It's not explicitly stated that this allows looking around corners, but it's how I interpret it.

Truesight is not X-Ray vision, and invisibility is different from total cover.

A monster with truesight can, out to a specific range, see in normal and magical darkness, see invisible creatures and objects, automatically detect visual illusions and succeed on saving throws against them, and perceive the original form of a shapechanger or a creature that is transformed by magic. Furthermore, the monster can see into the Ethereal Plane within the same range.

Nothing here says we can see through objects, and it is very plane to see that “invisible” is referring to creatures who have been made invisible by some sort of effect granting invisibility, not creatures with total cover. This is the important distinction: invisibility and total cover are distinct conditions. So the only question remains “what is it like to see into the ethereal plane?

I won’t reproduce the whole section on the Border Ethereal from the DMG, but I will comment that there does not seem to be anything that would imply the possibility of being able to see through solid objects, except for possibly this phrase:

solid objects on the overlapped plane don’t hamper the movement of a creature in the Border Ethereal.

While actually on the Border Ethereal, you can freely pass through solid objects, but it doesn’t say we can see through them while we’re there, and with Truesight, we aren’t even there, we are just peering in.

No, you can not see through solid objects if you have Truesight.

The description of [Truesight] says

A monster with truesight can, out to a specific range, see in normal and magical darkness, see invisible creatures and objects, automatically detect visual illusions and succeed on saving throws against them, and perceive the original form of a shapechanger or a creature that is transformed by magic. Furthermore, the monster can see into the Ethereal Plane within the same range.

Nowhere it says that it allows to see through solid objects nor it makes solid objects transparent or translucent. In this contest, invisible is not a synonym for full cover.

The description of the Ethereal Plane (DMG, pag 48) says (emphasis mine)

The enlighten part states that a location on each plane has its counterpart on the Ethereal one: this means that also walls, doors and objects of a room in the Material Plane have the respective counterparts in the Ethereal Plane.

Consider the following situation (see figure): creature A is spying creature B, which is inside a locked room with thick walls. A spies B from the Ethereal Plane and from the outside of the room, even if it is in the Ethereal Plane. B decides to cast True Seeing because it suspects that there are hidden traps in the room. A becomes "virtually" visible to B as they were in the same plane, but since it is outside the room (i.e. it has full cover due to the walls) B can not see it, Truesight does not allow B to see through the walls. Once A enters the room in the Ethereal Plane, hence B can clearly see it (if True Seeing is still active). 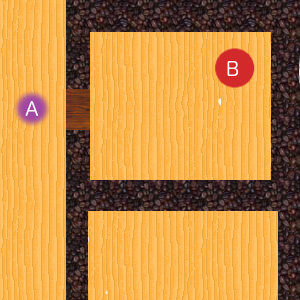 Not in general; Taken strictly, RAW has possible exceptions

A monster with truesight can, out to a specific range, see in normal and magical darkness, see invisible creatures and objects, automatically detect visual illusions and succeed on saving throws against them,...

Without specific language otherwise, we must interpret "seeing" in normal and magical darkness to mean regular vision, as solid objects are not producing either normal or magical darkness... but the rest of the portion quoted can be interpreted differently.

In the case of that spell, it specifies that you see them as though they were visible. This indicates that it follows the normal rules of visibility, simply ignoring the "invisible" status. Truesight does not use such language, and does not establish what may block the ability to see invisible creatures, only the range of vision.

An even stronger argument can be made for "automatically detect visual illusions", given that "detecting" doesn't automatically imply a line of sight, the way that "seeing" does...

According to Jeremy Crawford (discussing whether truesight allows one to see a hidden rogue),

10
With Truesight do you know that a creature is invisible?
5
RAW, does Truesight negate the Disadvantage component of attacking an Invisible Target?
1
Does Truesight encompass Detect Magic's awareness?
3
How far into the Ethereal Plane does the See Invisibility spell let you see?
10
How does Belashyrra's Truesight interact with its Eye Thief ability?
2
Does truesight see the attacker if they have used Steel Wind Strike?
6
What does the clause about seeing into the Ethereal Plane in True Seeing accomplish?