What is the lowest level character that can unfailingly beat the Lost Mine of Phandelver starting encounter?

For a lot of players, Lost Mine of Phandelver from the D&D Starter Set was their first 5e adventure. The first encounter from that adventure is rather swingy, like many level 1 combats. PCs may end up victorious without a scratch, or unconscious without getting a turn.

Let's assume you were really unlucky, though. Really, really unlucky. Can a single character unfailingly beat the encounter, despite all the dice being against them? What is the lowest level character that could pull this off?

Assume that whatever can go wrong for the PC, will go wrong. In general, this means that they will roll a 1 on all dice rolls (attacks, saving throws, ability checks, damage, etc.) If a low roll is beneficial to them (Divine Intervention, for example), then that roll may be a higher roll.

Assume that whatever can go right for the enemies, will go right. In general, this means that they will roll the maximum value on all dice rolls. If a high roll is harmful to them, then that roll may be a lower roll.

Four goblins. Two will use a scimitar and shield, and two will use shortbows.

The enemies can never successfully hide from (or surprise) a character with a passive Perception of 26. As long as that character can survive four max damage crits, they can cast meteor swarm to kill all enemies (even with minimum damage and a successful saving throw).

Our wizard has two strategies depending on their portent dice:

One of the portent dice is at least 15

Both of the portent dice are at most 14

So there's a couple observations we can make about this scenario:

So we'll try this with a level 7 (2 Fighter, 5 Fiend Warlock) Hill Dwarf

Our strategy is going to revolve around this basic tactic:

So now the only requirement is to attain at least 57 hit points so that the PC survives the first wave of attacks. We start with a Hill Dwarf, which gets +1 hit points per level, and also has a +2 Constitution Ability Score Increase. We'll use the Stat Array method of getting the character's ability scores and allocate them as

Charisma, Constitution, and Dexterity can be reallocated at whim, since the only requirement is to have enough health and meet the multiclassing requirements (Charisma 13+, Dexterity 13+)

We'll take the average for their hit points increase each level (so we don't have to roll it), and this will give us final hit points of 69 (14+10+9+9+9+9+9). We will also, in liu of the Warlock's level 4 Ability Score Increase, take the feat alert, which has the feature (among other things) of making the PC immune to the surprised condition so long as they are conscious; this prevents the PC from losing their first turn.

So in one turn, the PC casts two fireballs, dealing a total of 8 damage to each goblin, killing them immediately.

Now, it is possible for the Goblins to thwart this strategy by spacing out far enough that a single fireball cannot hit all of them simultaneously, but that requires them to precognitively recognize what the PC is going to do and move out of their "all 30 feet away from the PC" starting locations strategically in order to do so, so I'm going to assert that we not treat this like a concern.

The lowest possible level is 4

The goblin can take the Disengage or Hide action as a bonus action on each of its turns.

...one solution is to use area of effect spells like fireball which don't care whether the creature is hidden, but no single fireball can affect each of the goblins by the default rules for area of effects: 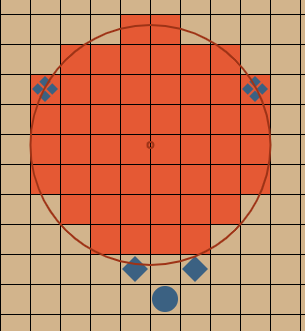 ...besides, fireball would require level 5, and a specific build that I will detail can bypass this concern easier.

The character, let's call her Cathy, is a level 4 human (variant) who is a level 1 sorcerer, and a level 3 bard for the following features:

...and finally Cathy has succumbed to the curse of lycanthropy (describe in the Monster Manual):

A character who becomes a lycanthrope retains his or her statistics except as specified by lycanthrope type. The character gains the lycanthrope’s speeds in nonhumanoid form, damage immunities, traits, and actions that don’t involve equipment.

This means that the goblin attacks deal no damage, even with their critical hits, since lycanthropes have damage immunity.

When you hide, there's a chance someone will notice you even if they aren't searching. To determine whether such a creature notices you, the DM compares your Dexterity (Stealth) check with that creature's passive Wisdom (Perception) score

(from the Basic Rules)

This would be possible even earlier if bards had access to magic missile since the multiclass level in sorcerer is only required to pick up that spell. The extra spell slot isn't technically needed as four level 1 slots and one level 2 slot grants a total of 16 missiles which is just enough to kill 4 goblins when divided up properly.

This improvement could come from one variant rule from the Dungeon Master's Guide (though it would require DM approval):

Modifying a class’s spell list usually has little effect on a character’s power but can change the flavor of a class significantly.

Seeing the ambush and fleeing

The idea is to have 26 passive perception so that the goblin ambush can be detected, then run away.

*if that's a bit of an ask, a level 3 Trickster can get familiar and have it help them.

Whether or not this constitutes winning, I'm not sure as you won't be able to hurt the goblins. An alternative is being a level 4 Trickster Akakocra and flying up in the air, but again, you can't hurt them.

Goblins have -1 wisdom, which means hiding from them is fairly simple. They have 9 passive perception, and a max search roll of 19.

A level 3 Druid can cast Pass Without Trace, giving them +10 Stealth,. Goblins will then have to spend their turns searching for the Druid while the Druid escapes.

Level 2 rogues also have access to hide as a bonus action, so they can hide and attack every turn. Unfortunately there is no real way for the rogue to kill the goblins. Their best bet would be to try and set the goblins on fire, or just annoy them until they leave.

Not the answer you're looking for? Browse other questions tagged dnd-5e optimization lost-mine-of-phandelver .