Does anyone know the name of this RPG featuring possessed villagers in the Yorkshire Dales ca. 1980's?

Years ago as a youngster I played an RPG book that was set in the Yorkshire Dales. I recall the story goes; you as the main character travel up to a remote Yorkshire mining village from London to visit a friend.

The village, surrounding areas and the mines have been overtaken by locals who have become possessed turning into zombies and other monsters. The weapons you have available are things like shotguns and kerosene bombs. I remember it begins with you walking up a country road to your friend’s house after journeying up to Yorkshire, it describes the moon being too high in the sky for the time of year as the starting narrative. A zombie/possessed man attacks you jumping out of the hedgerow on the roadside as the first enemy you face. You find the friend’s house abandoned and a note left behind for you.

I would love to know the title of this book as I can’t find it online by a descriptive search, it was probably published in the 1980s. I loved playing it as the concept and narrative were brilliant. I recall it was not one of the Steve Jackson / Ian Livingstone franchise titles but was an independent publication possibly published before they cornered the market on RPG books. If anyone can help me identify this book I’d be most grateful.

I am pretty sure this is Where the Shadows Stalk, by Ian and Clive Bailey. 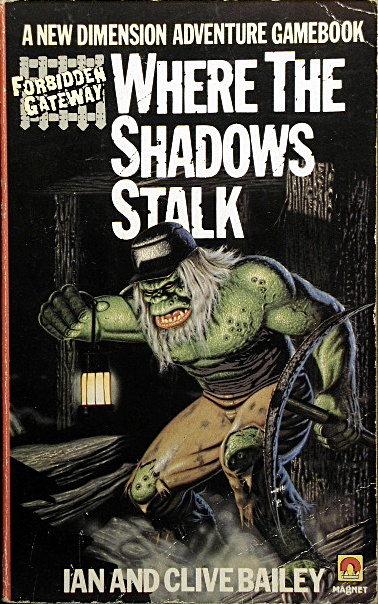 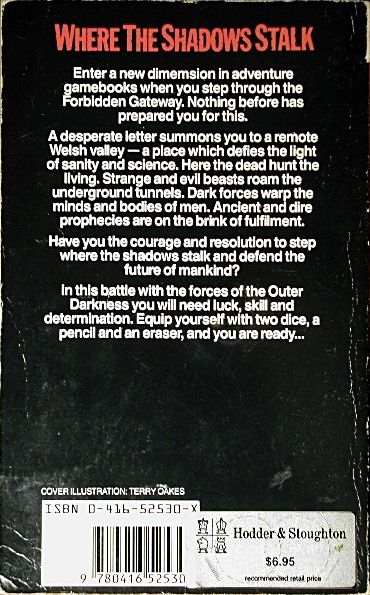 you as the main character travel up to a remote Yorkshire mining village from London to visit a friend.

Now, there's a detail here which doesn't match - it's set in a Welsh mining village, not Yorkshire. (In real life, Wales also used to have a large coal-mining industry.) From this review:

You play a gentleman in London who specializes in paranormal investigations. One fine day, an old friend in Wales summons you ... via a desperate call for help. There are mysterious happenings in the vicinity. A deadly fog has covered the area and nightmarish monsters stalk the region.

rpg.net have a playthrough of the book here. Page 2 of the "Let's Play" thread includes this:

The only light comes from a full moon riding high in the sky. Then you realise the moon should not be that high - after all you entered the fog when the sun was still setting. Pulling out your fob watch, you find that it has stopped at ten minutes past six and, no matter how hard you try, it will not restart.

A zombie/possessed man attacks you jumping out of the hedgerow on the roadside as the first enemy you face.

From the rpg.net playthrough:

Confused, you walk on through the dappled shadows that lie between the hedgerows, surrounded by the murmur and rustle of leaves. Soon your mind begins to play strange tricks. You imagine someone or something is keeping pace with you behind the hedgerow on your left.

Though I don't know if "zombie/possessed man" is an accurate description for what you encounter now:

Before you stands not a man, but some ghastly vegetable parody. The thing's face is contrived from tangled roots and shoots which, even as you watch, mould themselves into a grisly mirror of your own features. Its hair is a thatch of dry grass, its ears crumpled leaves, and black beans swivel in its eye-sockets. Tendrils swarm across the body, filling out a woody musculature. A woody jaw drops to reveal a row of thorn teeth and a rank compost breath plays upon your face.

'I am you,' the creature hisses, then crouches and prepares to spring.

You find the friend’s house abandoned and a note left behind for you.

Well... that's partly correct. The friend you were expecting to find is indeed missing, but his daughter is there, and she gives you quite a bit of exposition:

As you trudge into Bryn Coedwig, the long shadows of dusk envelop the valley. Your destination is Petrie-Smith's sprawling cottage, known locally as the manor. You knock at the door. Almost immediately, it is opened by your friend, Lucy.

She gives you a tremendous hug, then leads you into a crowded parlour and invites you to take a seat by the fire. Lucy apologises for her father's absence, he is incapacitated with an ague, she says, and has been forced to retire early. She gives you a cup of steaming tea and a bowl of broth (you may recover 1 point of Stamina), then enquires after your health and journey.

Lucy listens intently to your story but, to your surprise, shows no sign of being disturbed by any of the strange events that have befallen you. Nervously you remark upon her composure and, with a grim smile, she explains that the village has been plagued by a whole series of inexplicable events since the mist descended. Machinery has persistently failed, freak storms and earth tremors have battered the village, and a number of strange hauntings have been reported to her father.

These are quotes from the book. But you should read the playthrough as well. There's lots of enjoyable humour in the players' postings:

I ain't afraid of no hedge! Investigate.

Teach that upstart shrubbery a lesson!

As for the publication date:

it was probably published in the 1980s

The below scan of the copyright page shows 1985 as the year of publication: 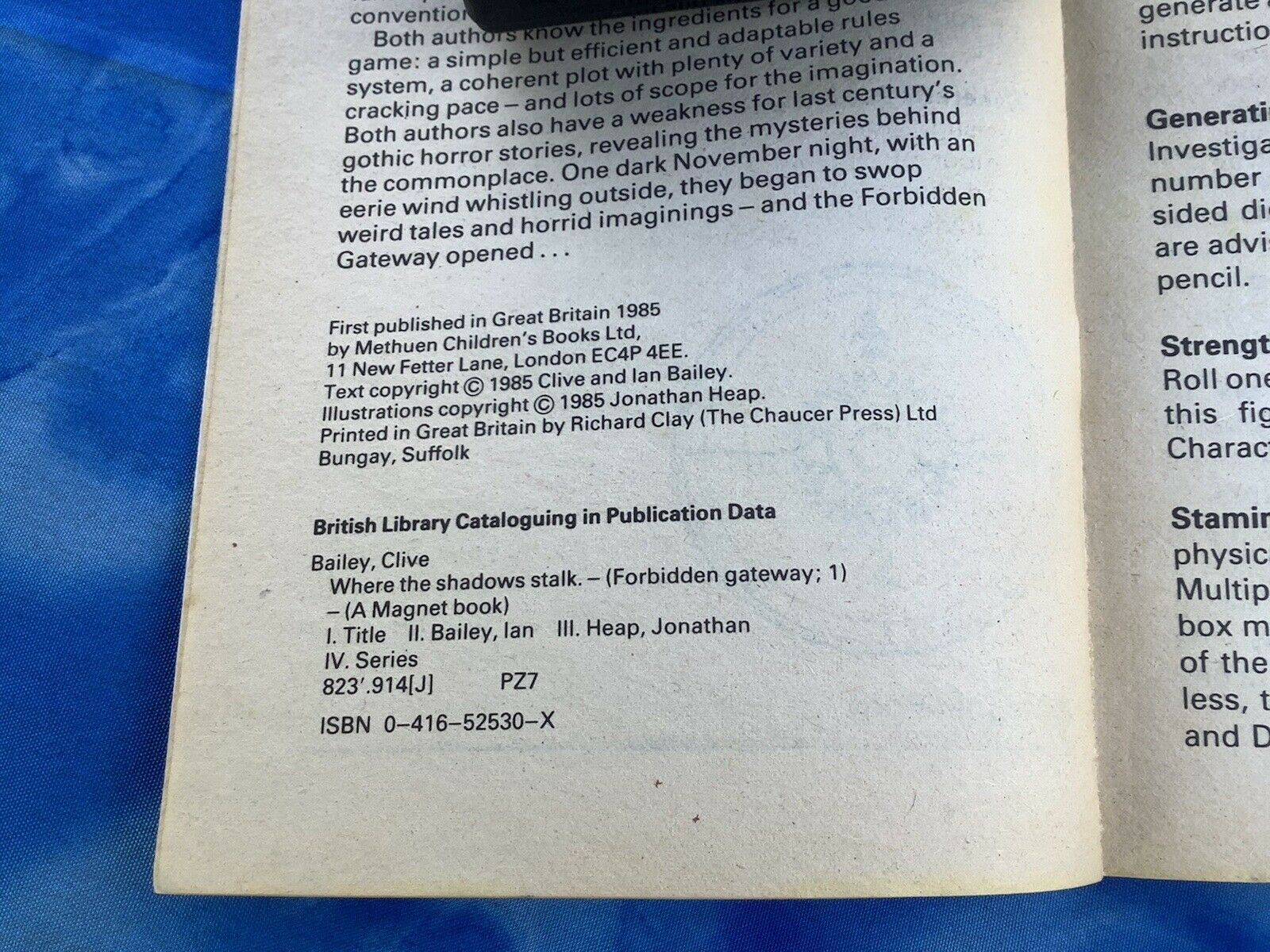 I recall it was not one of the Steve Jackson / Ian Livingstone franchise titles but was an independent publication possibly published before they cornered the market on RPG books.

As you can see from the cover scans, it is indeed not one of the Jackson/Livingstone titles, and it's not part of their Fighting Fantasy series. Though I have to say that if you like this book, you'll probably also like their House of Hell, published just one year before this book. I blummin' loved it!

The "Forbidden Gateway" series was short-lived, with only two books. These are listed at Demian's Gamebook Web Page.

I found this by googling

and looking through the results. There were surprisingly few to look through, given that zombies appear as an enemy in several different gamebooks! After finding this, I searched other sites for cover scans and additional information.

EDIT: One of the commenters on the original question asked what the game mechanics were, including whether or not it was dice-based. It is dice-based, using 2d6. As evidenced by this scan: 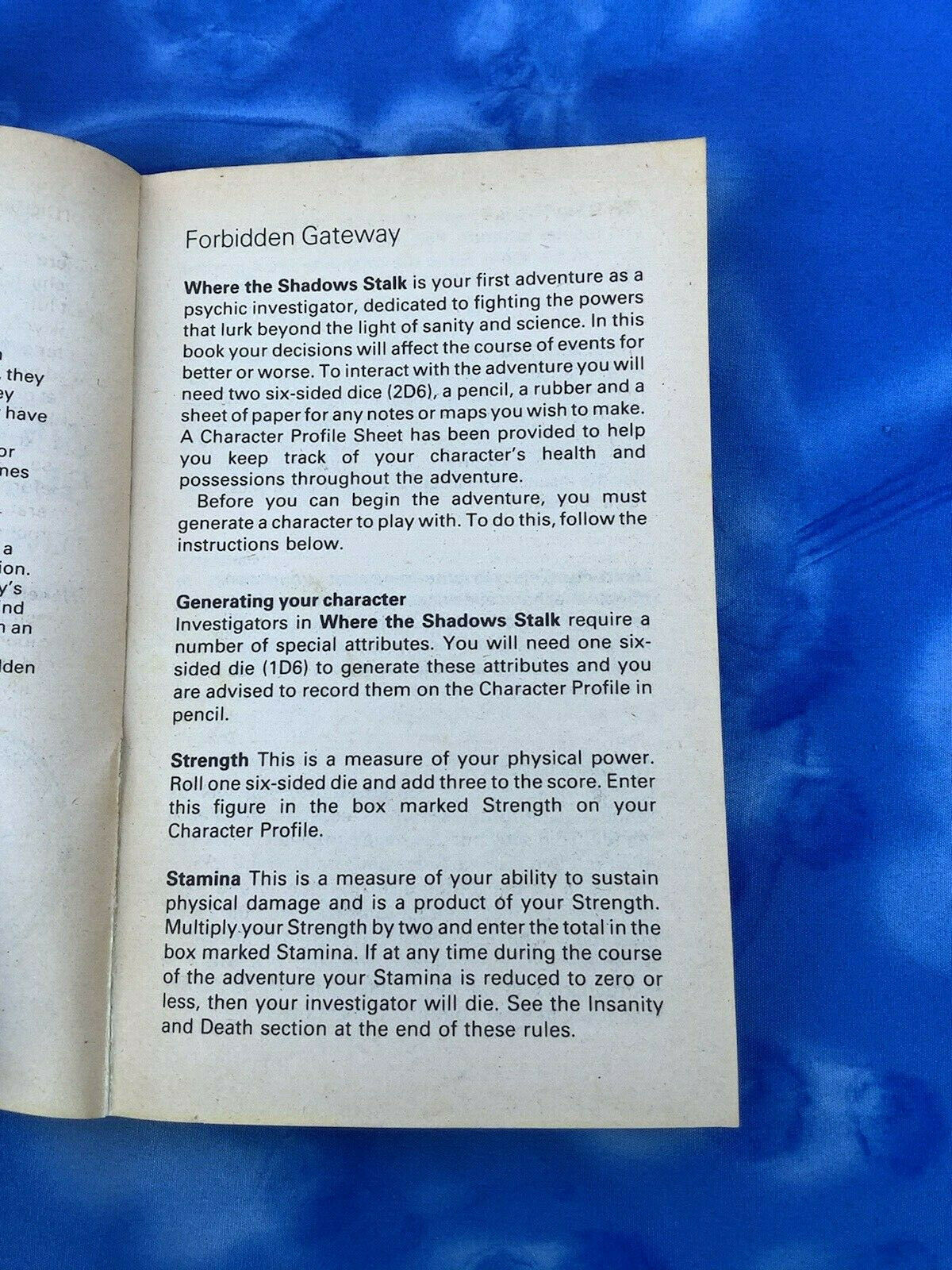 I did a search of rpgs in the 80s that mentioned either Britain or Zombies.

There were none that covered modern England and had zombies. There was one, Maelstrom, which covered England and Yorkshire, but it was set in the distant past.

I also searched for Yorkshire in drivethrurpgs.

This isn't a complete answer, but it at least eliminates two methods of searching. Those two sites don't know the name.