Does healing an unconscious, dying player character restore only up to 1 hp unless they have been stabilised?

I was told by a previous DM that if you heal a player who is unconscious and rolling for death saves each turn, that regardless off how much hit points the heal would heal them for, they are only brought back up to 1 hp (unless they've been stabilized by, say, spare the dying). Is this true or not and is anyone able to give a source for it?

No such rule exists.

There is simply no rule that says healing a creature with 0 hit points only counts as 1 hit point. The rules do say this:

The best way to save a creature with 0 hit points is to heal it.

A creature receives full healing from any healing spell while unconscious and at 0 hit points, and they immediately become conscious again:

This unconsciousness ends if you regain any hit points.

These quotes are from the rules for Dropping to 0 Hit Points.

Further, the rules for healing state:

When a creature receives healing of any kind, hit points regained are added to its current hit points.

If your current hit points are 0, and you receive 13 points from a cure wounds, the rules say you have 13 hit points.

A Grave Cleric feature explicitly confirms that you roll dice for healing a creature at 0 hit points.

When you would normally roll one or more dice to restore hit points with a spell to a creature at 0 hit points, you instead use the highest number possible for each die.

If it were the case that healing an unconscious creature always only restored one hit point, this feature would be entirely useless: it would never trigger because you would never be rolling one or more dice to restore hit points.

There is no distinction between 0 hp and another value

Under Healing (PHB p. 197) there is no distinction between 0 hit points and any other amount. Neither is there any indication under Stabilizing a Creature (also p. 197) that healing would work differently than expected. Absent any specific mention of such a rule, we must conclude that 0 hit points are not differentiated from other amounts of hit points with respect to healing.

Stabilizing without healing is noteworthy

Creatures can - instead of being healed - also be stabilized by a DC 10 Wisdom (Medicine) check when at 0 hit points (p. 197 and following). This paragraph details that

This specific rule might result in the notion you present. However, it is reinforces the point even more by saying specifically that the regain of a single hit points is only relevant absent any healing.

This is a rule that your DM is recollecting from the 2nd Edition AD&D rules. From the 2E DMG (1992), Chapter 9: Combat, section on "Hovering on Death's Door (Optional Rule)" (that is, being permitted to live at 0 hp or below): 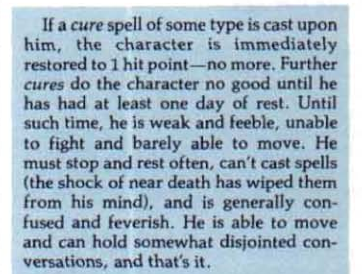 It bears highlighting that this is in the context of an optional rule to be extra-generous to player characters; the default rule was simply death at 0 hp. Note that in the prior edition, 1E AD&D, with a similar default and optional rule, even magical healing could not bring a PC back to consciousness after they had reached 0 hp or below (it would stop the hp-loss, but PCs were still at negative hp and nonfunctional until they received a full week of bedrest). In the following edition, 3E D&D, the restriction was removed, and magical healing could take a PC from below 0 hp, add back full normal hit point gain, and return them to full functionality instantly. All editions since have followed the same idiom.

Not the answer you're looking for? Browse other questions tagged dnd-5e healing unconscious .

20
How can a party with no healers return a character from the unconscious/dying condition?
10
Character Unconscious (negative HP) out of combat without a Leader
32
Does magical healing stabilize characters first or automatically grant hit points?
33
Does a Periapt of Wound Closure make you almost unkillable?
19
When stabilized, will receiving temporary hit points prevent failed Death Save when hit?
13
Can a creature be brought to consciousness while they have a max HP of 0?
62
How do I kill a 20th level raging Zealot Barbarian?
20
What balance issues would arise from a house rule imposing a saving throw versus exhaustion after a PC falls unconscious?
1
Can a conscious, stabilized PC do anything if they are still at 0 hit points after being stabilized with "Spare the Dying"?
10
Is it possible to heal before dying as a Zealot Barbarian?