Does a Bugbear PC take damage when holding an enemy on the other side of a Wall of Fire with Grapple?

Bugbears have long arms, allowing them to grapple enemies 10 ft. away.

The Bugbear's square is not in the effect range of the Wall of Fire. However, about 5 ft. worth of one of the Bugbear's hands is supposedly in a square that is.

Mechanically, does the Bugbear take damage? If so, simulationally, how do we reconcile that such a small fraction of the player being in the square and taking just as much damage as a character residing fully in the area of effect? 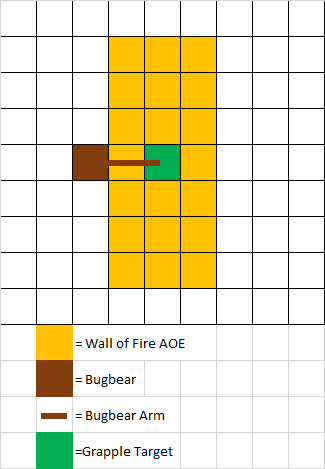 A bugbear cannot mantain a grapple with a target 10 feet away.

The Long-Limbed trait of the bugbear in Volo's Guide to Monsters states (VGM, 119):

When you make a melee attack on your turn, your reach for it is 5 feet greater than normal.

And the grappled condition on a creature can end either if the grappler is incapacitated, or

You could also interpret this trait as saying "for this melee attack that you make on your turn" (probably the intended reading), and in this case your grapple with a target 10 feeet away would end imediately after having initiated it.

What if the wall of fire or other AoE effect is already happening on the bugbear's turn?

Nothing happens to the bugbear: the space occupied by them is where they are, even if the extended reach might let you think otherwise. You could say that the bugbear feels the dangerous heat of the magical fire scorching their arms, but it is not enough to damage them.

The same way, any creature with an extended reach remains in their space: this space does not extend to accomodate a "grapple" situation.

The space of a creature is determined by its size alone, even if it extends its arms outward (from Player's Handbook page 191):

RaW, the bugbear takes no damage.

By the rules as written, the bugbear is not in the area that causes damage, so it won't take damage.

One side of the wall, selected by you when you cast this spell, deals 5d8 fire damage to each creature that ends its turn within 10 feet of that side.

The bugbear is 15ft away.

A creature takes the same damage when it enters the wall for the first time on a turn or ends its turn there.

The bugbear is not entering the wall. It sounds strange, I agree. Another strange possibility is that another creature can cross the space with the bugbears arms without any issue, which again sounds strange.

D&D isn't a realistic simulation, the rules don't cover everything, we should use common sense.

Do the above make perfect sense? Not really. For these edge-cases, which are not covered by the rules (in this case, being able to grapple something that is 10ft away from you), the DM should use common sense and make rulings that the table agrees with.

Different groups will prefer different approaches. At my table, I'd make the bugbear not take any damage, and the grappling space with his arms would be difficult terrain (if some other creature decided to run across it somehow). Another reasonable ruling would cause damage to the Bugbear but grant him a Dexterity save. Other tables would come to their own conclusions.

PS: as the other answer stated, this 10ft grapple is only valid on the bugbear's turn, when it attacks. After that, the enemy is no longer grappled. So most of the argument is pointless, the Bugbear will not end its turn inside the "danger zone".

As some of the other answers have correctly stated, the Bugbear does not have any ability to grapple at further than the usual 5 feet -- but let's lay that quibble aside. Let's just assume you've polymorphed your ally into a giant and address the real question of whether sticking an arm through a wall of fire will burn.

As written in the wall of fire spell text, "a creature takes the same damage when it enters the wall for the first time on a turn". Does entering require moving your space into the wall, or does reaching through it count as 'entering'?

Well, the rules aren't really clear on that point, but that's okay. The DM can and should make that call. Does it make sense in the context to get burned when you shove your arm through a literal wall of fire? Well, yeah, obviously. So it's entirely reasonable for the DM to rule that the grappling creature gets burned in this case.

It would be equally reasonable to rule that the character takes only half damage from this action since they're exposing less than their entire body to the flames, but then you have to deal with some weird corner cases, like making sure your PCs don't abuse this ruling by sticking an arm in for half damage, and then walking through since they already took the wall damage and it only deals damage the first time they enter it each turn.

Personally, I'd just say the wall does its full damage, whether you stick an arm through or your whole body, but that's really down to how you want to run your game.

To be honest, I would be pretty annoyed if my DM decided sticking an arm into a flaming wall doesn't do damage; that feels like rules lawyering of the most ridiculous kind, to claim you didn't get burned because the square that represents your character's "space" didn't technically move across the line.

TLDR: What is "inside" in this context? Also, Wall of Fire is a confusingly written spell.

This seems very clear cut to me. The text of the spell is:

When the wall appears, each creature within its area must make a Dexterity saving throw. On a failed save, a creature takes 5d8 fire damage, or half as much damage on a successful save.(2)

At Higher Levels: When you cast this spell using a spell slot of 5th Level or higher, the damage increases by 1d8 for each slot level above 4th.

(Emphases and numbered notes mine, for reference below.)

Salient features, in the order in which they occur in the text:

Note that 4 and 6 appear to be the same condition due to sloppy writing.

Possible ambiguities are as follows:

It surely seems to me that in most situations, the bugbear either enters the wall by virtue of initiating the grapple, or ends its turned having entered the wall by grappling at the end of its turn, and will therefore take damage. And not the Dex-save kind of damage, either.

Not the answer you're looking for? Browse other questions tagged dnd-5e area-of-effect reach or ask your own question.

23
Does grappling an enemy into an AOE also subject the grappler to the AOE?
4
Can the Grappling Strike maneuver option be used with the Thorn Whip cantrip to grapple a creature from up to 30 feet away?

19
How does a Web holding large creatures behave when set on fire?
18
Can two mages cast Wall of Fire in the same place?
10
Considering only spells from the PHB, are the Elemental Adept feat and the Elemental Affinity sorcerer feature only good with fire damage?
8
When using the Wall of Fire spell, what shape is a ringed wall on a grid?
6
Can archers bypass partial cover by arcing their shot?
0
Is this improved Grease spell balanced?
2
How much damage do you take when traversing an area filled with Burning oil in multiple squares?
4
Does the Wall of Fire spell damage creatures above it?
11
What does it take to get out of Grease and Web at the same time?
13
Can Large characters squeeze through a 5ft corridor between Walls of Fire?