Can you use the Telekinetic feat from Tasha's Cauldron of Everything to break grapples?

With the new 5e book, Tasha's Cauldron of Everything, there exists a new feat, Telekinetic (emphasis mine):

You learn to move things with your mind, granting you the following benefits...

My idea with this feat is that as a bonus action, you can presumably break your teammates from any grapple. As to the reason, I bring up the definition of grapple from the appendix in the Player's Handbook:

My interpretation of Grapple is that if I, a wizard, cast thunderwave/thunderstep/lightning-lure/telekinesis on a teammate, in such a way that, assuming they failed the save, they would be pushed/pulled out of reach of the grappler then grapple would be broken and the grappler has no way of contesting this.

The caveat with Telekinetic feat however is that the person being affected by the telekinetic push/pull can willingly fail. Therefore no check has to be made.

My friend group is in a bit of pickle over this.

I think, as per RAW, the grappler gets no chance to maintain grapple at all and the whether the grapple-e gets moved or not is based purely on if they pass or fail the saving throw of the spell. It's just in the case of telekinetic they can voluntarily fail.

Furthermore, what if I target the grappler with Telekinetic, they fail, do they then get a chance to maintain grapple and pull their grapple-e with them? Or does them holding onto the grapple-e cause them not be moved because moving grapple-e halves your movement and telekinetic moves them a total distance of 5 which is halved to zero.

If grapple-e gets moved with the grappler then it gives an unfair advantage to the caster of the spell as now they're moving two people for one spell.

I would love to know other's opinions on this.

The grappler has no say in contesting the forced movement of the grapple-e by an external spell. Its purely between the grapple-e, who is being affected by the spell, and the person casting the spell.

When targeting the grappled creature, the grappler is powerless to prevent this.

The third bullet of Telekinetic states:

As a bonus action, you can try to telekinetically shove one creature you can see within 30 feet of you. When you do so, the target must succeed on a Strength saving throw (DC 8 + your proficiency bonus + the ability modifier of the score increased by this feat) or be moved 5 feet toward or away from you. A creature can willingly fail this save.

So you target your ally, who is being grappled, and they can willingly fail the save. Next, they are moved 5 feet toward or away from you. If this movement takes them out of reach of the grappler, the grapple ends.

There is nothing the grappler can do about this, since the grappled condition says:

If there was a way for the grappler to prevent this, this is where it would be. This strategy works.

If using a grid, pay attention to positioning.

When doing this, you must pay close attention to your position in relation to your grappled ally and the grappling creature. The Telekinetic ability stipulates that the target will:

be moved 5 feet toward or away from you.

When attempting to use this strategy, you must position yourself so that your ally lands in a space outside the reach of the grappler.

I've constructed a diagram showing the spaces which should be good for using the telekinetic shove: 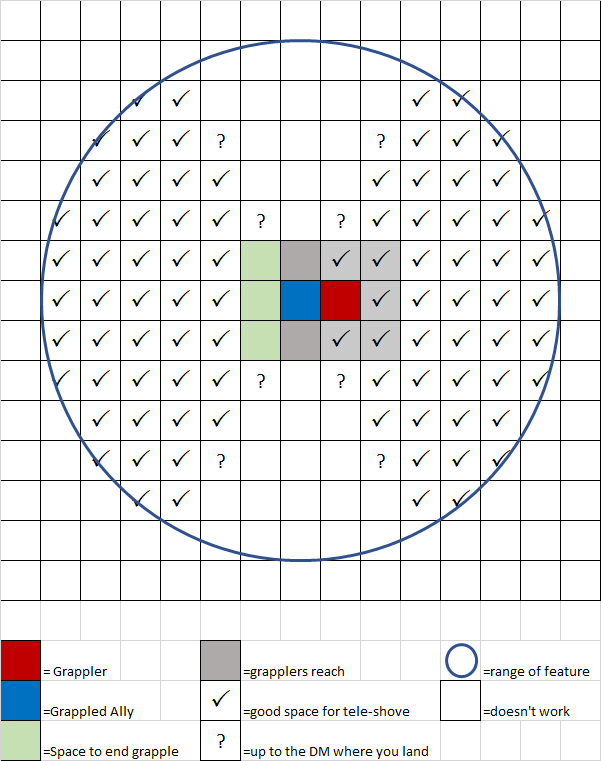 The blank white spaces should land your ally still within the grapplers reach. The "?" spaces indicate that your ally would land exactly half in and half out of a green space, but since we're snapping to the grid, it's up to the DM to rule where they land in that case.

If you aren’t using a grid, it’s just up to the DM to make a call.

Correct, the grappler can't stop this, provided the geometry works out.

As you correctly stated, your ally can willingly fail the save to Telekinesis, being moved automatically, and being moved out of reach ends a grapple. There's no option for a grappler to prevent this.

However, positioning and enemy reach are important here. Since Telekinetic can only move the target directly toward or away from you, you need to be in a position such that 5 feet of movement along a straight line from you will get your ally out of reach.

A larger enemy such as a giant could be positioned adjacent to your friend so that 5 feet of movement simply doesn't clear their 10-foot reach, which completely denies this strategy. Even against a medium creature, if you aren't aligned correctly, a five-foot push might only get your ally onto the diagonal rather than clearing the area, so this depends on the orientation of the characters in the room.

Still, yes, you're right; this is a very strong strategy to prevent grappling. That said, I doubt grappling attacks are common enough to make this a cause for concern.

The grappler should roll the STR save to maintain the grapple

Personally I believe the best solution is for the grappler to make the save in place of the grapple-e.

Not the answer you're looking for? Browse other questions tagged dnd-5e feats grapple forced-movement .

32
Can you shove your way out of a grapple?
15
Does shoving a creature break its grapple on another?

12
Does forced movement, as in Thunderwave, necessarily break a grapple?
3
Should a player be aware of other simultaneous saving throws before making their own?
21
Can you cast Sanctuary after initiating a grapple without causing the spell to immediately end?
5
Can the Telekinetic feat from Tasha's be used to shove an object 5 feet?
6
Can you use the telekinetic feat vertically?
12
Can I Use the Telekinetic feat to Pull Someone Out of a Gelatinous Cube?
10
Can you target yourself with the third benefit of the Telekinetic feat to act as a "Disengage" by moving you away from an enemy?