How would optional re-rolling of all hit dice on leveling up affect average hp?

I am considering a homebrew rule that would give players the option on leveling up to re-roll all of their hit dice (excluding their first level) instead of only rolling their new hit die when determining their maximum hit points.

I have been trying to figure out how this option would affect average hp outcomes at different levels but I only play with probabilities as a hobby so I am having issues with the math once it gets to higher levels.

How would allowing players to re-roll all hit dice when leveling up affect average hp, assuming that players will always re-roll if their former max hp was below average?

I am aware that this homebrew creates the possibility that a character would lose health on leveling up. Such an event would not be fun but I am not too worried because players with a lower risk threshold would likely not re-roll when their hp is just slightly below average. In addition if someone ends up with less hp one level they will likely experience greater gains the next level.

When I'm trying to analyse a process which I can clearly describe as an alogrithm, but I'm having a hard time constructing the statistics I like to use Monte Carlo. The basic idea is to have a function which does the thing (using a digital die, ie. a pseudorandom number generator), run it many times recording the output, and then analysing that data as experimental results. That means the data will include some noise, we use high numbers to reduce that.

Using the python code at the end of the answer, we get the simulated result of 100000 characters with a d8 hit die and con mod of 0 levelling from 1 to 20 using the proposed houserule. Note that the last column is something else, we'll get back to that.

Omitting the 1st level as it's always static, and the 2nd level which will on average be the same, we get a slight increase over the average for just rolled. At 3rd level it is about 1 (average of 18 opposed to 17), but at level 20 it is only about 9.3 better. So while the initial expected increase is 5.5 going to 3rd level, it dips below 5 (the standard average levelling on a d8) when going to 10th.

But another possibility of this method is the ability to roll lower than your previous hit point total. Therefore, I also included a tracking of that, specifically how many times that happened (that last column in the code output). It averages to a 28.4% chance over the course of levelling from 1 to 20. That obviously includes some characters experiencing it twice or more (5 was the highest in my run), but doesn't include rolling the same hit point total as you had.

Running the same for the other (PC) hit dice sizes gives the tabulated values. Of note that d12 goes down to the rounded up average by 20th level, but would (slightly) more often experience a loss of hit points.

When diving into what level the decreases happen using a slightly different version of the function in the code, we find them biased towards Tier II and to odd levels. I would assume the latter to be an artefact of the .5 in dice's average compared to the integer results. 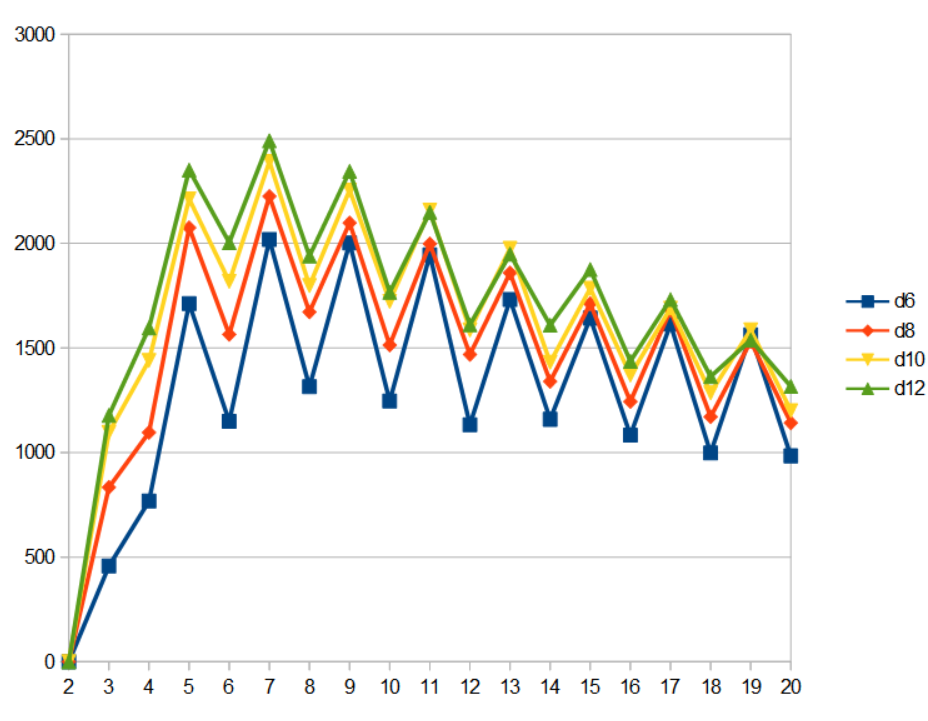 The y-axis is count of levels with a decrease out of 100000 runs for that die size.

In theory, not much. In practice, even less

For one, you wouldn't reroll if your score was above the average of 4.5 per dice, since odds are you'd end up worse. And you would be rerolling any good scores you previously had. On top of that, you only ever get to do this once per level, so averages won't matter nearly as much as the very random results this will produce.

After all, don't forget that this gives you the unique chance for a character to, upon leveling up, lose considerable amounts of hit points from a bad roll - something that would be extremely unfun to experience as a player.

In summary, I think this option would ultimately be a trap for your players, which would actively harm their enjoyment of the game.

10
How does acquiring a template that changes hit dice affect pre-existing hit points?
13
When leveling, is the hit die only added to the maximum dice, not current dice?
18
If I roll a low Hit Die, can I use the fixed value instead?
84
Why would I ever choose rolling hit points?
2
What happen to HP maximum in case of hit dice loss?
14
How does the optional Healing Surge rule interact with other uses of hit dice?
10
Do the rules specify that you add your CON bonus to HP when taking the average at leveling up?
16
How do hit dice affect my attacks?
7
How much on average does the Durable feat increase the number of Hit Points gained when spending Hit Dice?
13
How many hit dice does a Sidekick start with?