I just read the mechanics for dice rolling in Vampire: the Masquerade 5th edition and something is bothering me. It seems to me that the larger your dicepool is, the more likely it is to get a messy critical.

Just in case somebody wants to answer without knowing the rules, here is a very brief rundown:

A character rolls a number of d10s called a dicepool. For the vast majority of rolls, at least one of those dice would be a Hunger die. Let's just assume it's a single one for simplicity. If at least two dice come up as 10s, that's considered a critical. If at least one of those 10s is on a Hunger die, then it's a messy critical where the character succeeds spectacularly but in the most direct and brutal way possible. Picking a lock with a messy critical can lead to the character ripping the door off the hinges - grants passage but it's not subtle.

These are the relevant rules here.

Comments asked for clarification, so here it goes:

A critical win in which one or more 10s appears on a Hunger die is a messy critical.

It seems to me that the larger the dicepool is, the more of a chance for a messy critical. My intuition is the following:

Is my intuition here correct? Is a master at picking locks would be more likely to let the Beast do his job than somebody who's just average at locks? I am not sure how to properly calculate the odds of messy criticals.

There is a mechanic that allows you to re-roll some dice but I'm not interested in this, only the chance of scoring a messy critical from the initial roll.

Messy criticals become more likely overall, but less likely as a fraction of all criticals 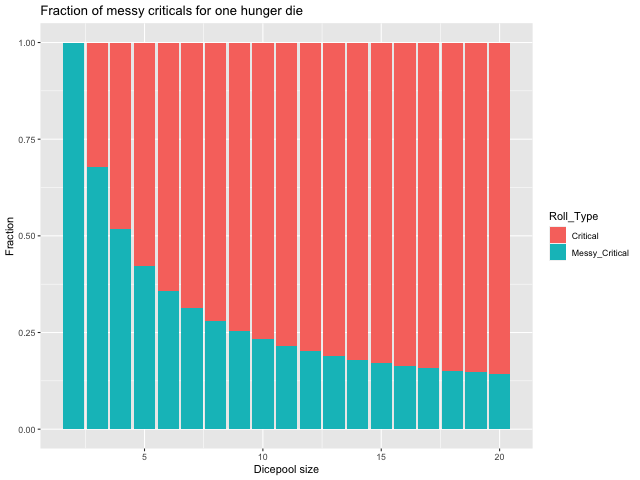 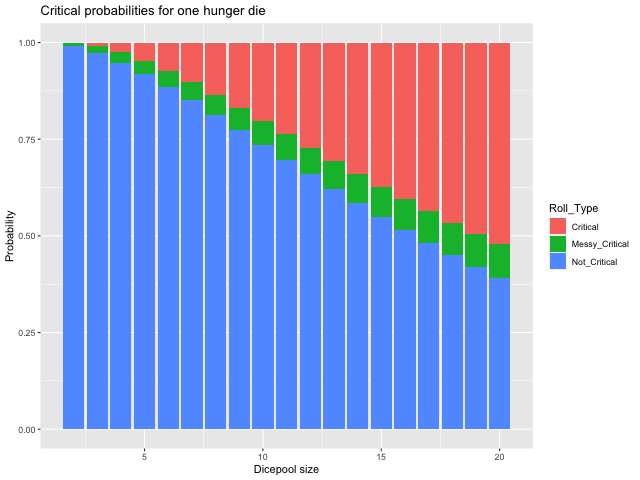 Adding more hunger dice changes the "floor" for the exponential decay: the general rule is that the probability of a critical being messy can never be less than the probability of rolling a 10 on a hunger die. For example, with 2 hunger dice, there is a 19% chance that at least one of them will be a 10, so the chance of a critical being messy can never go below 19%. Meanwhile, the trend for increasing the total dicepool remains the same: criticals become overall more likely, and messy criticals become more likely along with them.

Here is the R code I used to generate the above plots. This code exploits the fact that we only care whether each die is a 10 or not, which means we are effectively flipping a biased coin with a 10% probability of heads. With this in mind, we enumerate every possible roll and compute its probability and whether it is a crit or a messy crit. We repeat for each dicepool size from 2 to 20 and plot the results.

Your intuition is broadly correct. More dice give you a better chance of a critical roll, regardless of other circumstances

The intuition for this situation is that more non-hunger dice means more chances for getting at least two to show tens. As long as that's the metric that matters (meaning we don't care about results that are not tens), then adding more dice always improves your odds of rolling additional tens.

This is completely unrelated to the hunger die (I'm assuming that a hunger die is a specific die marked out before the roll). The results of the hunger die roll are not related to the results of the other dice, and so for this particular scenario it may make things easier to think about the two varieties of dice completely separately (it may be easiest to imagine rolling each set, hunger and non-hunger, separately):

It might be a bit confusing to think in terms of assuming a result (although that is the correct way to calculate the odds you're interested in), because you are removing the randomness of the assumed result. That seems to me to be the cause of confusion in your second-to-last line.

A master at lockpicking is more likely to roll a critical by virtue of their large dice pool-- that's the representation of their lockpicking skills. But their hunger die has an invariant chance of showing a ten. They are very good at picking locks, but have a chance of their hunger complicating the effort, and are not necessarily particularly good at dealing with that hunger just because they pick locks well.*

For d10s, this is just (9/10)^N, where N is the number of dice you are rolling. We are computing the 90% probability that each die will show a non-10 number, and multiplying those probabilities to get the likelihood that those outcomes will all happen at once.

This does, indeed, increase the chances of a messy crit as dice pools get larger.

Sometimes in TTRPGs mechanics alone make for odd-seeming results in narrative terms. I'm not familiar with V5 rules overall, but I suggest that, narratively, a messy crit of "ripping the door of its hinges" during a lockpicking check really is unreasonable. It's hard for me to believe that anything done with a lockpick and torque wrench, by anyone or anything, would lead to the door being torn apart.

I don't have a good understanding of what a critical success in picking a lock would be... it's a binary event, you succeed or you don't, unless we factor in elements like how long it takes.

Instead, a messy crit (in the spirit of a botched roll from Revised or V20, which may not be appropriate) might more plausibly lead to something like jamming a lock pin permanently out of place in the lock cylinder. Maybe it makes a loud noise and attracts attention. Certainly the lock is obviously broken, and no key will ever work in it again.

Conversely, if the hunger die represents the character going out of control (similar to a frenzy in earlier editions), it might represent the character losing control and becoming so impatient with picking the lock that they lash out and tear the door off its hinges.

If there is a mechanism for things like automatic successes, a character with a large dice pool for a check might be a good candidate for one due to this messy crit mechanic. If you don't need, or can't use, a critical success, then there's little point risking a messy crit.

That said, Vampire has never been known for being really technically airtight and well-balanced. This may be another example of that, carried forward into the latest edition!

Not the answer you're looking for? Browse other questions tagged world-of-darkness statistics vampire-the-masquerade-5e .

14
How can I model Burning Wheel probabilities in AnyDice?
2
Using nWoD dice system in V20
6
How many Hunger dice apply to a split dice pool?
10
Would it be fair to use 1d30 (instead of rolling 2d20 and taking the higher die) for advantage rolls?
10
How can I calculate the sum of 2 random dice out of a 3d6 pool in AnyDice?
38
Simulating these special dice on more regular dice
4
Modeling a system where you roll Xd20 and take highest, plus the second highest if the first one is a critical, etc
3
Anydice: Neon City Overdrive type eliminative dice pool BUT danger dice cancel equal to AND less than
7
How to calculate the added expected damage from critical hits?