What are common routes from Shadowdale to Waterdeep?

The party I DM has completed their adventures in the Dalelands (Shadowdale and Daggerdale) and wants to travel to Waterdeep. The party is fairly low level, so their travel will be non-magical and not too expensive. The time period is the 1350s DR, the geography is similar to 5e but not to 4e. What are common routes from Shadowdale to Waterdeep? Bonus points for the time various routes take.

I've accepted the excellent answer from @RevenantBacon for mundane water and land based transportation to Waterdeep. In Shadowdale in 1355 DR (year of the Harp) the two spell casters high enough level to cast teleport are Elminster and Sylune (she dies in 1356 DR, year of the Worm). Neither of them casts spells for money so they would have to decide that the parties need is great enough to help them. The parties motive for travel is to escape the wrath of the lords of Zhentil Keep and the Zhentarim. My call is that El and Sylune view the journey as a learning experience for the party as they cross Faerun.

This is going to be a significantly long journey.

I'm not sure if your party realizes just how far it is from The Dalelands to Waterdeep. For reference, it's roughly 1,200 miles as the crow flies. Unfortunately, however, there is no direct travel route that takes you on a straight line from Shadowdale to Waterdeep. There's the Desertsmouth Mountains, the Marsh of Chelimber, The High Moor, the Serpent Hills, and even the Anauroch Desert, all of which would have to be passed through or circumvented, so we'll probably want to take a roundabout route.

Disclaimer: all distances are approximate. I have a huge poster map of the sword coast on my wall that I took down and measured these distances with a ruler, but these are still only approximate distances. The edition that the map represents should be mostly irrelevant, as the overall topography of the land hasn't really changed

The Means of Travel

The first things we want to figure out is what the fastest means of travel is, so we know which route to take, or when to switch means of travel should one option become unusable. For travel method, we have several options.

These are going to be the two main types of transportation available to the players, anything else will likely be too expensive. Since boats are obviously the much faster option, we'll want to stick to them whenever possible. Unfortunately, no single waterway connects Waterdeep to the Dalelands, so some land travel is unavoidable. With this information in mind lets take a look at possible routes.

Luckily for us, we can at least start our journey on the water, as Shadowdale lies on the River Ashara, a rather large river that can accommodate even the largest of ships, allowing us to get a decent start on our journey, jumping onto a ship right off the bat. We'll take it down to Scardale, on the coast of The Dragon Reach, which is the Northernmost portion of the Sea of Fallen Stars, in a journey of about 500 miles. One there, we'll look for a ship headed for the city of Proskur on the Westernmost edge of The Dragonmere, the farthest west portion of the Sea of Fallen Stars, another 900ish miles.

We disembark at Proskur, and from here start the first (and hopefully only) land travel portion of the journey. We take the Road 150 miles west to the City of Irieabor, which lies on the shores of The River Chionthar. The river over 700 miles of land, all the way to The Sea of Swords, and passes right past Baldur's Gate, which, assuming that that's as far as our current ship is travelling will be where we book out final voyage, a mere 550 miles to the city of Waterdeep. 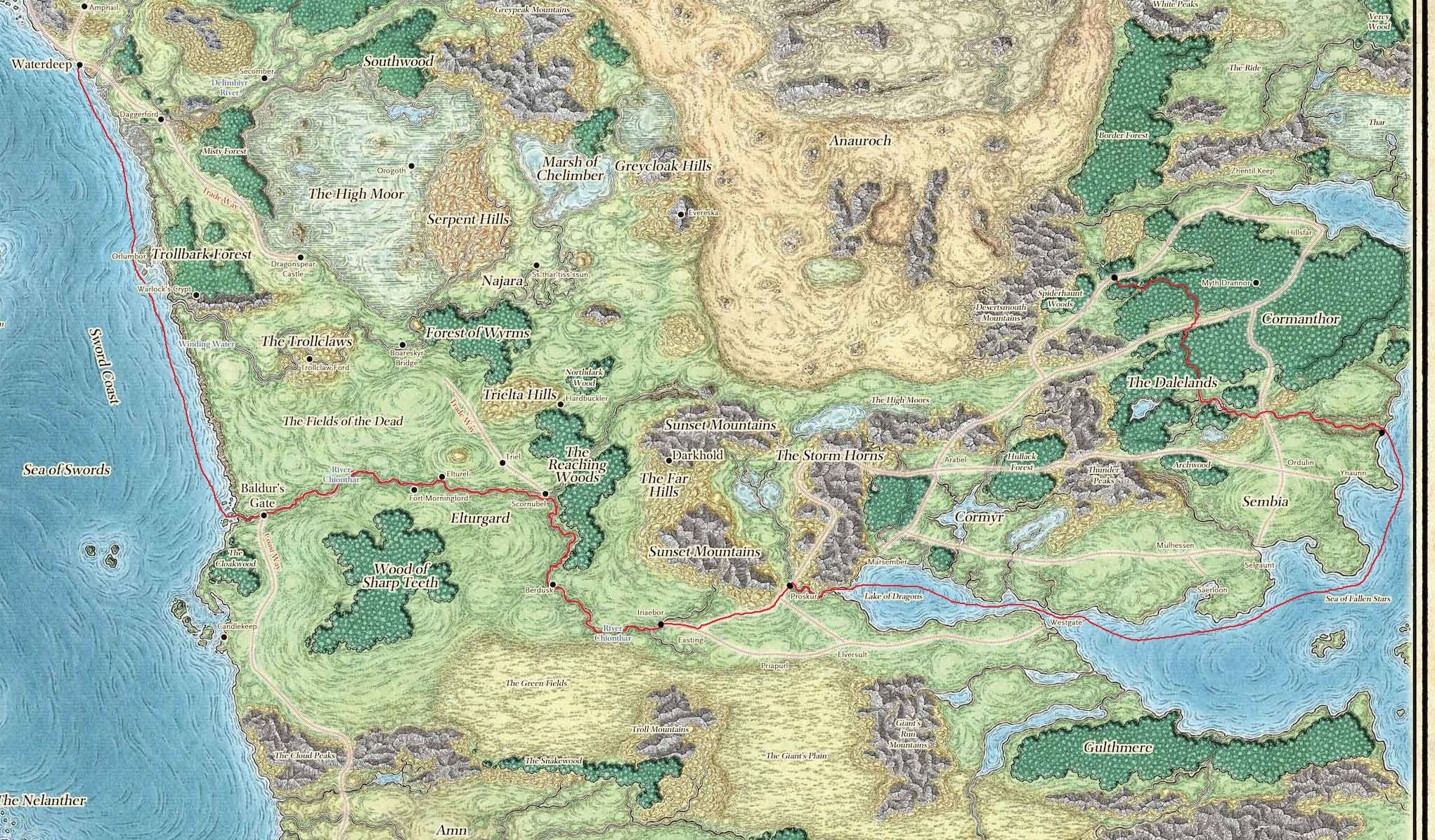 Other Means of Travelling

A few more travelling options that I left out from the main I will list here, for completeness.

Not the answer you're looking for? Browse other questions tagged lore forgotten-realms travel .

10
How to travel to Skullport from Waterdeep
7
From what language(s) did Common evolve?
18
What is the in-universe explanation for "Waterdhavian" being the adjectival form of Waterdeep?
6
Are "sambar" (electrum) coins minted and used in Waterdeep?
7
Are there Xanathar Guild operations outside Waterdeep?
6
As of 1492 DR, who are the Masked Lords of Waterdeep?
4
How big is the Waterdeep City Guard?
2
How would the Zhentarim try to recruit a party?
50
Why are ball bearings so common in the Forgotten Realms?