Grease spell: Can a creature with 10 strength or more jump over the greased area?

The spell Grease does the following:

Slick grease covers the ground in a 10-foot square centered on a point within range and turns it into difficult terrain for the duration. A creature that enters the area or ends its turn there must also succeed on a Dexterity saving throw or fall prone.

Since the affected area is only 10-foot long, can a creature with 10 or more Strength jump over the greased area, thus avoiding both the Dexterity saving throw and the difficult terrain?

For reference, the rules for Long Jump are the following:

First we need to determine the Grease spells area:

Then we need to determine what "enters spell area" means. I did not find clear definition, but if you fly over the area of Grease spell, it'd take a special kind of DM to consider that "entering".

Looking at other spells, Thunderwave clearly specifies an area that is a cube. So I think the normal English meaning of Grease spell's area is quite clear: there is a thin, almost 2-dimensional square layer of slipperiness covering the ground, and to enter it you have to basically touch the ground. If the area of effect had a volume/height, the spell would say so, talking about cube or cylinder.

So, if your feet do not even touch the ground covered by the Grease spell effect, you are not entering it. If you jump completely over it, you won't touch it. So jumping far enough avoids the spell.

Then about STR 10: Strict RAW, with STR 10, you cover only 10', not 10' + one step. If you keep just jumping, you advance 10' per jump, which includes the space taken by your feet. If you kept jumping, you would move forward in 10' increments (well, less for standing jump, but the same principle applies).

So you'd have to either jump from or land at the greasy area, and while you might avoid the difficult terrain (because you don't actually spend movement walking in the grease), you'd at least need to make a DEX saving throw. With this reading, you'd need 1 (or even 2, one at both sides) extra foot, in other words STR 11 (or 12), to avoid the grease completely by jumping.

RAI, hard to say. The rule could be interpreted meaning, you can jump past an obstacle of that many feet, and a DM could reasonably rule it that way. The argument for this interpretation is, that the rules don't say how many extra feet of jump distance you need to get over an obstacle like this, so the reasonable ruling is, that no extra feet are needed.

The creature would need a Strength score of 11 and 21 movement speed.

And Grease is a 10ft area on the ground. A creature that flies, hovers, jumps, or otherwise is able to avoid the ground can avoid the spell.

Slick grease covers the ground in a 10-foot square

So a creature can jump over Grease if it runs for 10ft and then jumps 11ft over it. If on a grid like the inage below, it then moves an additional 4ft. A DM could argue you'd need to jump the entire 15ft (so requiring a STR score of 15) but that's a ruling that should be discussed beforehand. 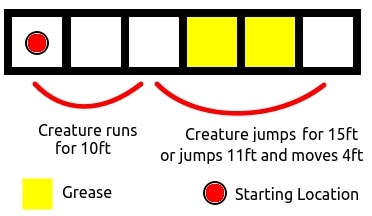 Not the answer you're looking for? Browse other questions tagged dnd-5e spells terrain .

8
Does Grease at most just cause one round being prone?
12
Does an asleep creature (affected by Sleep spell) wakes up if entangled with Entangle spell?
10
Can the Grease spell force multiple saves?
17
What is the DC of a Grease effect put in place by the Oil of Slipperiness?
3
How many gallons of mayo does one need to pour on the ground to replicate the Grease spell?
0
Is this improved Grease spell balanced?
14
Sleet Storm: do crampons stop you from falling prone?
9
Where does a creature - flying low over a large body of water - descend when subject to the Earthbind spell?
11
What does it take to get out of Grease and Web at the same time?
5
Is a creature that is not on the ground affected by the Sleet Storm spell's risk of falling prone?