What is the probability distribution for CthulhuTech rolls?

I've recently learnt about CthulhuTech, which has a unique dice pool system:

CthulhuTech uses a proprietary game system known as "Framewerk" that focuses on a dice pool system. An unusual feature is the selection of numbers from the d10 rolls – a player can pick a single highest number, all like numbers, or straights of consecutive numbers, and use these to generate the result. The result is then added to a "base" consisting of a related attribute score bought by the player at character creation. The sum of the base and the result is then compared to target numbers or to the results of an opponent's rolls to determine success or failure.

As a future game designer, I'd like to understand what sort of probability curve this creates for a given set of dice pool sizes, say 1-10 dice. This will hopefully let me see if I want to incorporate a similar dice pool system into a game I am planning.

The result of having multiple ways to get choose numbers from the dice pool are quite chaotic.

The creator of anydice tweeted this anydice function for CthulhuTech dice pool rolls.

It's unclear what the benefit of such a dice pool system is.

The anydice function time out for numbers over 7d10 so a full range of graphs isn't currently possible. 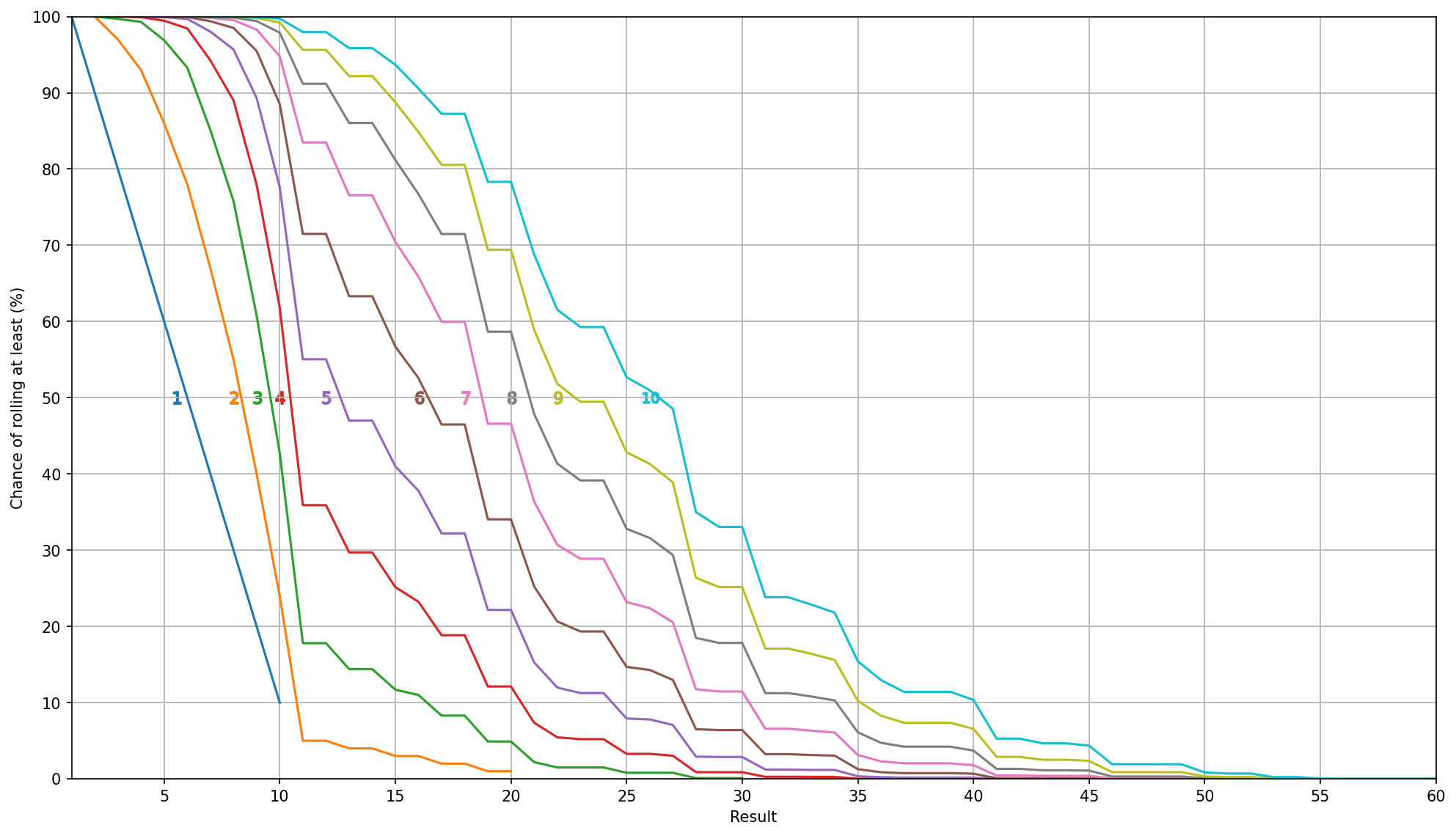 (Technically the results go up to 100, but the chances above 60 are so small as to be practically invisible so I omitted them to give more space to the actually-visible part of the graph.)

How long did it take to compute a 10-die pool? 26 milliseconds. While I'm sure there's more micro-optimization possible, the important thing is that this can be computed using a polynomial-time algorithm rather than using exponential-time enumeration of all possible rolls.

Here's a general strategy for computing dice pools (where the individual dice are identical) in polynomial time:

As long as the state space and score updates are polynomial, the algorithm as a whole will be polynomial-time.

Example code. Note though that there are some differences to the above, and this code and API may change in the future.

Not the answer you're looking for? Browse other questions tagged statistics game-design cthulhutech .

2
What are the probabilities of rolling doubles in a pool of d6s?

8
How can I simplify a series of rolls without changing probability too heavily?
54
Is it possible to produce a bowl-shaped probability curve with dice rolls?
9
Improving "fumbles" when using pools of d10s in TROS
5
How can I get to roll more dice in CthulhuTech?
5
Help with probability for a complicated dice pool mechanic
6
Modelling opposed dice pools with a swap
10
Would it be fair to use 1d30 (instead of rolling 2d20 and taking the higher die) for advantage rolls?
25
How to approximate decaying probability distributions with few dice?
15
Struggling with rolling for stats probability calculation