Statistically, when is wielding a Large weapon worth it for a Medium-sized character?

In D&D 5e, according to p. 278 of the Dungeon Master's Guide, if a Medium-sized character uses a Large weapon, its damage dice are doubled, but it causes them to suffer disadvantage on their attack roll:

A creature has disadvantage on attack rolls with a weapon that is sized for a larger attacker. You can rule that a weapon sized for an attacker two or more sizes larger is too big for the creature to use at all.

The answers to the question Do weapons looted from creatures that are larger than Medium in size retain their damage when wielded by Medium-sized PCs? support this interpretation. However, my question is not asking whether wielding oversized weapons is allowed or not.

Assuming that characters are allowed to wield Large-sized weapons, when (if ever) is it statistically advantageous to do so?

Let's take the example of a Variant Human Barbarian with a starting Strength score of 16, and Great Weapon Master as their racial feat.

It is never better than Medium Weapon with GWM

Taking disadvantage on all attack rolls is a pretty large penalty. Generally this is a worse idea than using the other abilities available to you.

Taking a level 1 barbarian with a strength of 16 wielding a medium or large great axe I created the chart below. (Charts ignores critical hits) 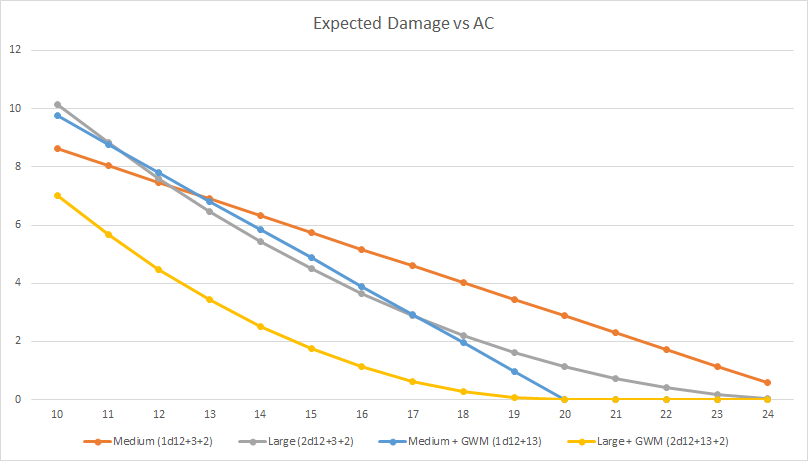 As you can see from the chart, against most reasonable ACs (13+) you are better off using a medium weapon. At level two you gain Reckless Attack, assuming you use it all the time the chart changes to the one below: 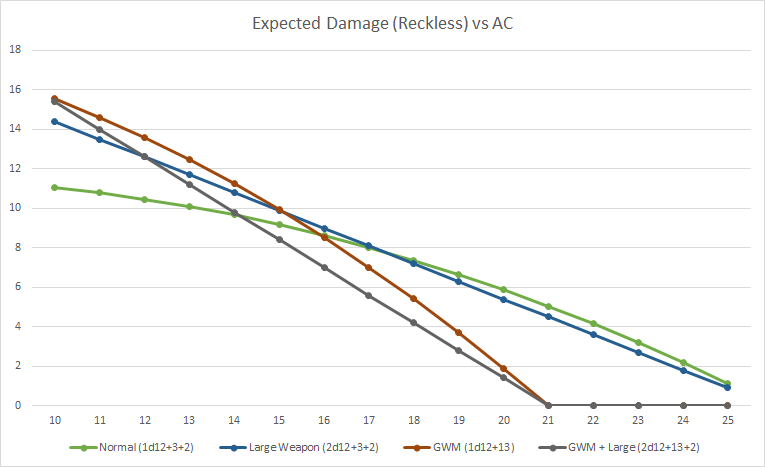 Once you have Reckless Attack some of the downsides of the medium weapon as removed. However against low ACs when the large weapon has an advantage against a medium one, you are better using Great Weapon Master and the medium weapon.

In summary, you are better off sticking with a medium greataxe and using Great Weapon Master in situations where the large weapon would benefit you.

When you already have Disadvantage anyway

It doesn't stack with itself, so if you have Disadvantage, you get a free bonus to your damage if you happen to have an oversized weapon.

When your target has truly abysmal AC

I'm talking "below 10" levels of AC, where you are almost guaranteed to hit anyway. Double chance of rolling a 1 is still just around 1 in 10 with two dice, so the extra damage will compensate.

So basically, whacking oozes and funghi.

Other than that, having Disadvantage is bad. You really don't want to give it to yourself, it's no fun and mathematically very bad for you. It reduces a 50% to hit to a 25% to hit, that's cutting your damage in half, which an extra die simply can't compensate for (due to static bonuses).

I ran some quick numbers, and assuming that with a normal weapon you get half your damage from the roll an half from static bonuses (ie; a Str 18 raging Barbarian with a Greataxe or something) then you need to have a 70% chance to hit (6+) or better for this to be worthwhile on a normal hit.

If you have Advantage on the attack that you're throwing out for a bigger weapon, you need to have an 85% chance to hit (3+) for it to be worthwhile.

And that's assuming half your damage is from the roll. As you rise in level, that becomes less as your static bonuses increase, which means that as you rise in skill, this approach becomes worse.

So this is most effective at very low levels, where you're unlikely to get your hands on such a strange weapon, and never worth it at high levels, where a regular weapon is better. Plus, it only really shines in situations where you're already disadvantaged anyway, which is the exact situation you don't want to be in.

I wouldn't recommend this to anyone.

DM guidance for building custom monsters has nothing to do with player characters.

The intro to the section you quote says:

The Monster Manual contains hundreds of ready-to-play monsters, but it doesn’t include every monster that you can imagine. Part of the D&D experience is the simple joy of creating new monsters and customizing existing ones, if for no other reason than to surprise and delight your players with something they’ve never faced before.

The first step in the process is coming up with the concept for your monster. What makes it unique? Where does it live? What role do you want it to serve in your adventure, your campaign, or your world? What does it look like? Does it have any weird abilities? Once you have the answers to these questions, you can start figuring out how to represent your monster in the game.

This indicates that what follows is not rules at all, and has nothing to do with determining how much damage a player character can do. So when you state in the question:

In DnD 5e, according to p. 278 of the Dungeon Master's Guide, if a Medium-sized character uses a Large weapon, its damage dice are doubled, but it causes them to suffer Disadvantage on their attack roll.

This is simply false. The Dungeon Master's Guide does not say this at all. It provides guidance you can use when designing stat blocks of your own, but it contains no player-facing rules as you suggest.

Assuming this guidance for custom monsters is used to apply to player characters, extra expected damage drops off depending on the AC of the target, unless the disadvantage is offset.

Assuming +4 to strength with a proficiency bonus of +3, using a 1d12 damage weapon, here is a table indicating the expected damage per attack based on the AC of the target and damage dice of the weapon:

Not the answer you're looking for? Browse other questions tagged dnd-5e weapons damage statistics oversized-weapons .

11
Do weapons looted from creatures that are larger than Medium in size retain their damage when wielded by Medium-sized PCs?

1
Can I use Oversized weapons this way?
1
Is there a way to steal a Huge-sized weapon in combat?
11
Do weapons looted from creatures that are larger than Medium in size retain their damage when wielded by Medium-sized PCs?
7
Is this addition to the spell Negative Energy Flood balanced?
5
Is the Midgard Heroes Handbook Centaur race considered as Medium, or Large, for the purpose of grappling and shoving?
6
Is the Wield Oversized Weapon epic feat as bad as it looks?
5
How does Free-Hand work with Titan Mauler?
4
What are the rules for the size of weapons?
8
How do Enlarge/Reduce spell interact with the Oversized Weapons rule when you Enlarge a Medium size creature with a medium weapon to Large size?