Roll Xd6, keeping highest value and adding +1 for each duplicate of that value?

I'm making a card/dice game and I'm trying to set something up on Anydice to compare the odds of the dice rolls, but I'm having some trouble wrapping my mind around some of the language Anydice uses.

What would I need in order to roll a set of dice, keep the highest value, and add +1 for each copy of that die?

I don't care if there ends up being a higher result with lesser dice (for instance, rolling [5, 5, 5, 6] could have a result of 7, but should have a final result of 6), but that's mostly for the sake of simplicity, as the odds of rolling enough lower duplicates to outperform a roll of higher value is low enough to ignore.

This is the BG.SE question where the dice system's requirements originally came from (and why it's relevant).

There's a couple little tricks we can use here. Firstly, we want to look at the individual values of a roll, so we need to cast the roll to a sequence. We do this by appending :s to the parameter name in the function declaration.

We then make use that such a sequence will (by default) be sorted descending, so we can get the highest value as 1@DICE. The third trick to recognize that the number of duplicates is one less than the number of that value, for which there is an inbuilt function [count value in sequence]. Assembling this all together we get:

We can then sanity check our result. Our highest value is 8 from getting [6, 6, 6] and we'll see that this has the probability of 1 over 216 (from 6\$^3\$). The the minimum of 2 is from [2, 1, 1] and the two other permutations of that result for a probability of 3/216. (I'm mostly sharing that to show a simple way to check the result, manually calculating the for the extreme outcomes is usually much easier.)

Beside Someone_Evil's excellent answer, I would like to add a mathematical contribution, in order to generalize the above rule for large number of \$X\$ and for different dice.

On a first hand, observe that the score \$v\$ under the above rules is given by \begin{equation} v = h+s-1 \end{equation} where \$h\$ is the highest roll among the dice and \$s\$ is the number of realizations of such roll. Consider for example \$v=3\$ within rolling 3d6: the outcomes that provide with such result are

As an example, consider the case of rolling 5d4:

The figure down below, instead, depicts the distribution when the number of rolled d6 ranges from 3 to 60: the yellower, the higher the probability. The computation has been done in Python. 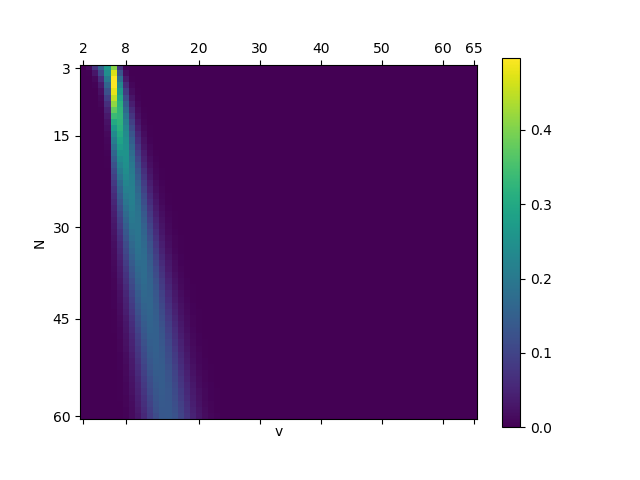 As a curiosity, as the number of rolled dice increases, the distribution resembles a Gaussian one (with \$r^2\$ close to 0.99), as it is clear from the figure below (credits to Kieran Mullen for pointing out that a 3D plot could be more clear). Indeed, as Someone_Evil pointed out in the comments, for large \$N\$ (about 30-35) the probability to get at least one 6 is close to 1: hence, the above distribution is simply a Binomial one. Moreover, as \$N\$ approaches infinity (in real life, it means that it is large, in this case about 30) the binomial distribution is approximated by a Gaussian one. 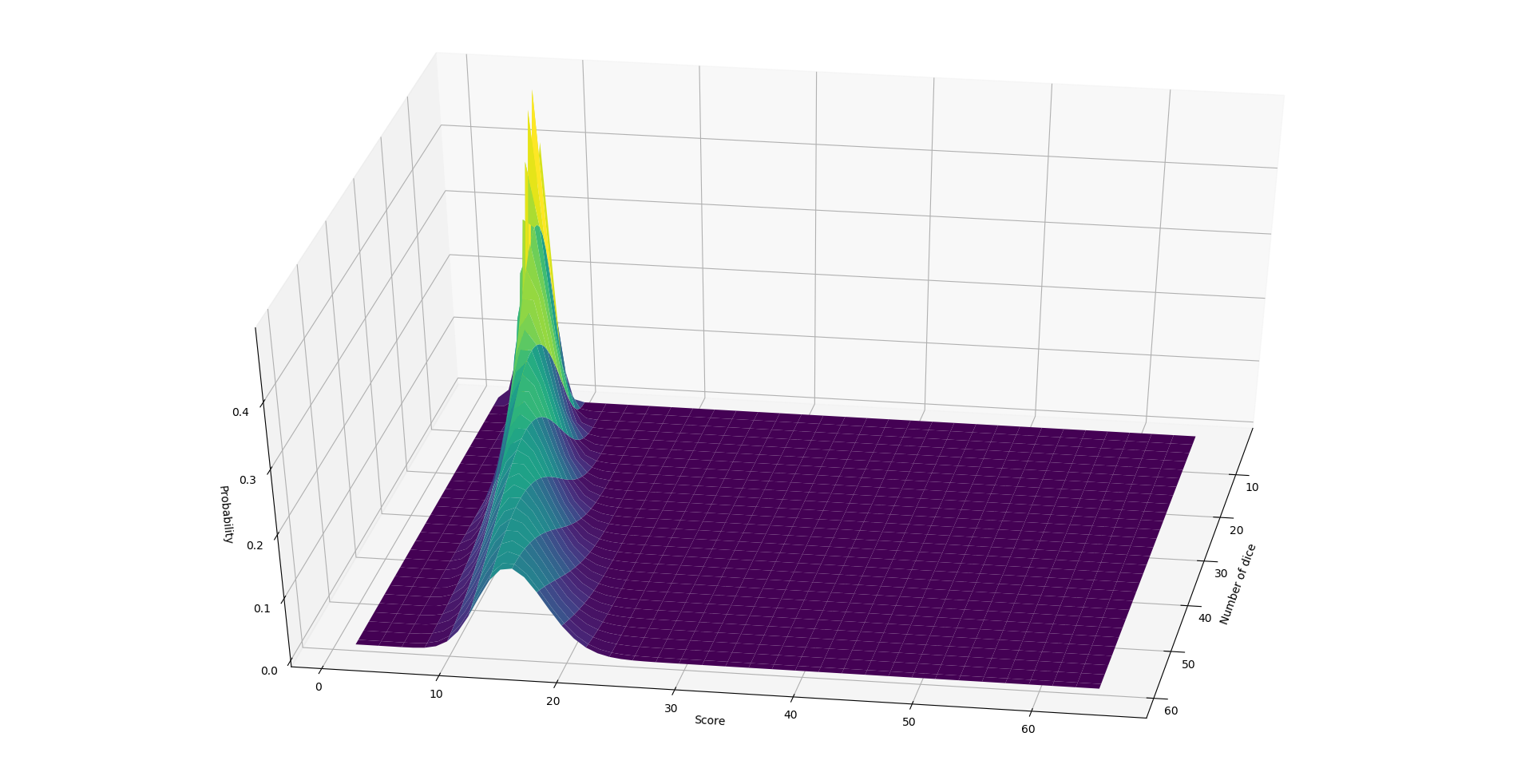 9
Using AnyDice to determine the odds of getting a specific number sequence on multiple dice
6
Modelling opposed dice pools with a swap
2
How do I find the odds in a dice pool contest?
10
How can I calculate the sum of 2 random dice out of a 3d6 pool in AnyDice?
1
How can I model the probabilities for highest and lowest of opposing dice pools?
6
AnyDice compare dice roll value to number on a multidice roll
7
Is it possible to model these probabilities in AnyDice?
3
how to calculate the odds of 5d6 higher than 1d10?
4
Modeling a system where you roll Xd20 and take highest, plus the second highest if the first one is a critical, etc
4
Anydice: Neon City Overdrive type eliminative dice pool BUT danger dice cancel equal to AND less than