Melee cover vs Cover - Can you always use Stealth?

I am using this image from another post, which is why it has lines drawn on it that are useful for only a small aspect of this question: 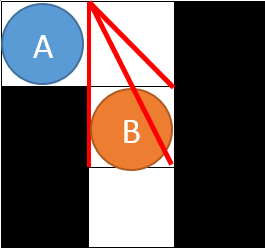 According to the stealth rules, you need cover in order to make a stealth attempt. According to the Combat rules, PFSRD - Combat (see the cover example #2 in the link), both A and B have melee cover with respect to each other, but not ranged cover (assuming neither is using a weapon with the reach property that can also attack an adjacent square, such as a spiked chain). So, ranged attacks do not grant cover bonuses, but melee attacks do? Could the melee cover be considered cover for the purposes of allowing a stealth roll? I was thinking of it like, A presses his back against the wall, turns the corner and shoots an arrow directly into B's face, granting sneak attack damage if the stealth roll is successful.

Initially, I thought this made sense. However, the fact that A's cover depends entirely on B's weapon choice seems peculiar. If B is holding a spiked chain, A no longer has cover with respect to B. If that were true, it is almost like B's spiked chain increases B's perceptive abilities. Alternatively, maybe stealth was never possible in this scenario at all.

pathfinder-1e stealth cover
Share
Improve this question
edited May 10 at 14:41
InterstellarProbe
asked May 10 at 13:26

Firstly, the example you cite is flawed

Just to get on the same page, your A and B have Cover from each other regardless of what weapon they use. The example you link is poorly written, but it is including an additional, uncited rule and misphrasing it.

When the example says "the rogue does not have cover from it, as the ogre has reach (so it figures attacks as if attacking with a ranged weapon)." what it actually means is that the ogre can choose its non-adjacent space from which to determine Cover.

Secondly, yes the creature(s) in your example can Stealth

Because, as noted above, they do have cover from each other, they qualify for using Stealth to gain Total Concealment until they attack, move without Stealth, or the other creature comes around the corner.

Not the answer you're looking for? Browse other questions tagged pathfinder-1e stealth cover or ask your own question.

11
Does cover also grant concealment?
3
Can I hide using Cunning Sneak with Wilderness Skirmisher?
15
Can you pass an entire surprise round?
3
How does the Heretic's Escape judgment ability work?
5
Can Good Domain clerics bestow negative levels?
5
Can a Shadow Monk use shadowstep without breaking stealth?
7
Does a ranged attack around a corner incur cover penalties?
15
Shooting at larger creature behind the smaller creatures crowd
9
Is a Perception Check against an Invisible Target made with Disadvantage?
6
Is there a way to Stealth but allow your allies to target you?