Where does this ÔÇťYou think you're in a room...ÔÇŁ D&D quote come from?

My players bought me a plaque for DM'ing for them that has this quote on it.

Nat 1. You think you're in a room. But you've been wrong before. 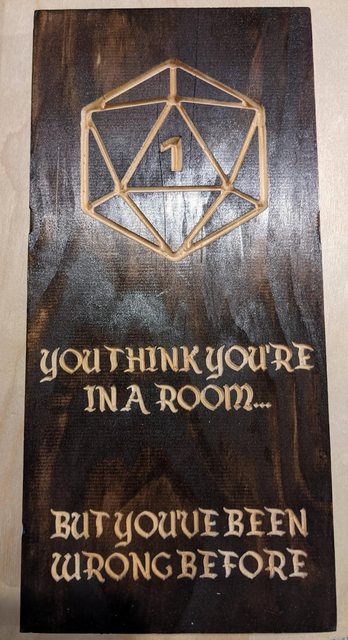 It seems like a quote that would have come from some RPG live play group or some such but while I can find plenty of people mentioning this quote and selling it on things, I can't find the origin of it.

Where does this quote come from?

"You're In A Room" originated, as best as I can tell, from the TV game show Knightmare, in which contestants had to describe a fantastical world surrounding a blindfolded partner. When beginning their descriptions, it was very common to begin the with "You're in a room", to the point that it became a beloved phrase associated with the show.

Eventually, the phrase permeated into computer and tabletop RPGs in which games would begin their descriptions, jokingly or otherwise, with "you're in a room". I have personally been part of games as a player and DM where the narrator jokingly ended the description there and waited for players to confusedly ask for detail.

This plaque subverts this quote with the natural 1, indicating that you can't get even the most basic information about your surroundings.

It turns out source described below probably is not a root source, but may very well be a direct source of the text on your plaqe.

The only instance I can find that's not related to merch comes from D&D reddit:

DM: "You think you're in a room, but you've been wrong before"

It looks weird for this little comment to be source of all this merch, but it's in a thread dedicated to collecting ideas for quotes to put on rpg gadgets. Looks quite probable that gadget manufacturers have found it. Especially given that I (and Medix2) can't find any merch that would actually predate this comment.

before anyone else bothers them, I have already asked them and they said they definitely didn't come up with it but don't remember where they got it from.

Thus, it looks like it ended on the merch because it was on the "give me merch ideas" reddit thread, but the root source would forever stay a mystery.