It's common to hide die rolls as a DM and there are some advantages to it.

The problem is that they can still hear two dice or see when you're rolling twice. Although it's rarely useful to do so, you can't hide advantage and disadvantage.

What techniques are there for rolling twice for advantage without hinting at the fact that the NPC has advantage or some other funny business? 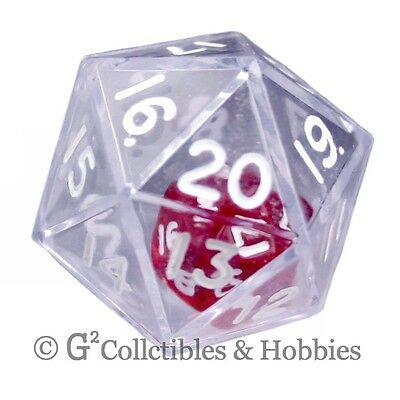 I’ve used one like this before, it takes a little getting used to, but they aren’t hard to read.

Have two different colored d20s, and always roll both of them, but designate one as the main die, and the other as the adv/dis die. This takes more mental work than the d20 inside d20, as you have to remember to roll both every time.

Consider not hiding it

For example, if a monster is searching for the PCs and they don't know it, but the creature is nearly blind, I'm not going to just roll behind my screen and tell them the monster obliviously lumbers past their hiding place; I'm going to describe how they can hear it sniffing deeply, scenting the air as it passes and how it looks right at their barely passable hiding place but then just wanders past as if it didn't even notice.

If the noble the PCs are attempting to con is secretly a con artist himself and gets advantage against them because he knows exactly how a con works, I'm not going to hide that he's rolling with advantage against them. I'm going to describe how the noble's eyes narrow with suspicion as the con unfolds and he seems to know what they're doing almost before they do it.

Rather than trying to hide metagame information, I push that information out of the meta and into the narrative. If the players are asking "Wait, why did you roll two dice?", the characters should be saying "That was strange, did you notice that?"

One strategy consists in always rolling two d20s (or a d12, if you do not have another d20, since the rolling sound could be similar to the d20's one) and check only the result from one of them (or from the icosahedron in case of using a different die).

Use a digital device.

You may use your smartphone for rolling dice: there are several apps devoted to this, if your table is not using DnDBeyond, which includes roll buttons for attack rolls, ability checks and saving throws.

I play DnD online, both as player and DM: in the latter case, when I have a NPC rolling with adv/disadv, I obviously use the second way (with a custom program on my computer).

Pretend That You're Rolling For Something Else

The DM has to roll things in secret all the time - so when a creature has advantage/disadvantage on a check and you don't want them to know what you're rolling, just roll the first die, then pretend that you're rolling for some follow-up thing after.

If they ask you what the second roll was...just give them a big smile.

Note - I would also consider situations where the players would reasonably know that you're rolling with advantage, which has already been well-discussed in Darth Pseudonym's answer. But if you do have a situation where it should be secret, this should help obfuscate the reason you're rolling twice.

If we're talking about in combat, a common time saving trick people I've played with use, is roll damage and attack together. Behind a screen you're always rolling multiple dice, regardless of how much (dis)advantage there is.

Outside of combat, control the meta. Roll multiple dice and suddenly change the weather in a way that has nothing to do with the dice. Have a useless NPC act up. Have them notice other details of the scenario. Roll extra dice for no reason whenever you feel like it, look like you're impressed and move on like nothing happened. Make pained expressions when you roll well.

Your players are likely always going to suspect something is up. Because of the way dynamic storytelling works, they will assume everything they encounter is important in some fashion and will act accordingly. They will meta-game because they know what their rolls are and will make assumptions based on whether they're working or not, and they will use what they know of you as a DM to predict what's coming.Being consistent is good in a game where the rules have some very soft edges, just remember you're playing a role as a person as well as the entities you manipulate within the game.

Use tables of pre-generated roll results

If you roll a large number of Advantage rolls in advance and write down the results in tables with 20 rows each, you have fair die rolls already recorded. Each is still random (they are all real die rolls), and rolling a single d20 to choose a row on the table is still random. But you're only rolling one die, and as long as the players can't see the roll result even the most astute will not recognize that you're doing anything other than rolling a single die.

If you do this it is important to remove results from the table when they are used, such as by crossing the row out or marking it in some other way. The reason this is necessary is that if you allow the value you use to be replaced and chosen again you will have altered the random distribution of die results to favor those particular results you happen to have already rolled. This in turn requires you to have a method for dealing with a roll result pointing to a row you've already eliminated, but something simple (like choosing the next-highest row number) will work just fine.

The main wrinkle is that there are far more than 20 possible outcomes of a 2d20 roll, but this is pretty easily addressed with multiple tables. If you prepare several tables this way you can move to the next table when you exhaust results from the current table.

I've never used this system for hiding Advantage, specifically, but I am a huge fan of disguising what dice rolls represent. Roll result tables have been very useful to me in that regard, and are quick and easy to prepare, use, and interpret.

I recommend using a phone app to roll your secret dice. I tried "RPG Simple Dice" and it seems fine; one click to roll any die, and I didn't see any ads. There's probably a fancier one with better animations.

In my games, my policy is that all dice rolls (both mine and my players') must be public. The main reason to roll dice in secret is so that you can lie about the result of the dice; you know this, I know this, and players also are very aware of this. So, whenever I notice that someone is rolling dice in secret, I start to wonder if they're lying about the result, which leads to me having less fun in the game.

Some people feel that it's necessary to roll dice secretly when checking if an NPC is spotted, but I use a technique like this:

Alice: "I walk into the room!"
Bob: (rolls a secret Stealth check to see if you notice the spider on the ceiling before it attacks)

Alice: "I walk into the room!"
Bob: "Well, there's a spider on the ceiling of that room, and it's trying to attack you stealthily. Give me a Perception check, DC16, to see if you notice the spider; if you fail, it gets a surprise round."

The outcome is the same in both cases, but the players feel more powerful and have more fun when they have all the information at their disposal.

Convert the advantage to a ±5 modifier

Advantage / Disadvantage is approximately equal to a +5 / -5 modifier on a dice roll. This isn't completely accurate (the modifier should vary depending on the DC), but may be good enough for your purposes.

Advantage also doubles the chance of a crit, so take a 19 or 20 as a crit.

But for the majority of cases, this is probably good enough.

Not the answer you're looking for? Browse other questions tagged dnd-5e gm-techniques .

11
How does fighting in an area covered by the Darkness spell work?
10
Would it be fair to use 1d30 (instead of rolling 2d20 and taking the higher die) for advantage rolls?
6
How would this House Rule for combined Advantage/Disadvantage Impact Rolls?
25
Players get frustrated when they can't solve a hard diplomatic problem. How can I get them to think out of the box?
12
Is this Homebrew Advantage rule broken?
16
'Advantage' or 'Disadvantage' on damage rolls
25
What is a decent dice rolling strategy for partial/half advantage?