How am I supposed to read these weapon cards?

The Mouse Guard RPG boxed set came with weapon cards like this one for reference: 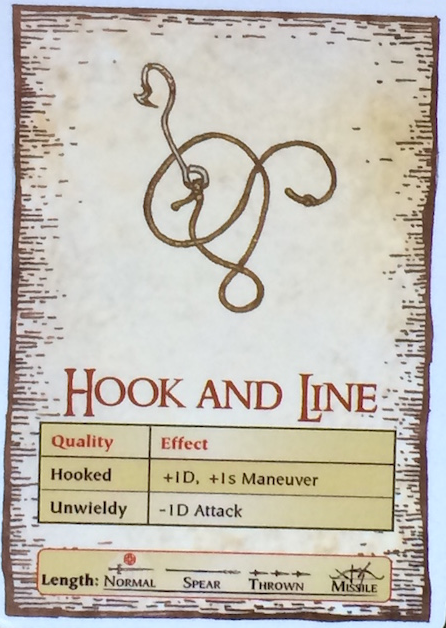 How am I supposed to read this? There's a bunch of "+1D" in the rules, but what does "+1s" mean? Does the attack penalty always apply when I'm in a fight?

Like most reference materials, it's supposed to be a reminder for the rules you already know.

This is also true of the cards for the second edition of the RPG, which present this information in a more tabular layout with less text, just the bonuses under their associated combat actions: Attack, Defend, Feint, and Maneuver.

The abbreviations +D and +s are covered much earlier under "Dice" in the opening chapter, on page 15 of the first edition or page 13 of the second edition.

+1D means roll one extra die, with different numbers for rolling more or fewer dice. This extra die succeeds or fails as normal for any other die in the die pool.

+1s means to add one success if the roll was successful, with other numbers as appropriate. If you fail a test, it doesn't matter how much +s you have, none of it counts.

+s is preferable in situations where you're making independent tests against small obstacles or versus tests against less skilled opponents; it improves the effects of your advantage. +D is more broadly useful.

Most of the other information you need starts on page 119 of the first edition, or page 116 of the second edition, "Gear for Conflicts". I'll summarize it here.

Before the three actions are scripted for a round of conflict, everyone participating in that round as an active player decides what weapon they will use. You can only choose one weapon, even if this is a solo conflict and you're taking all three actions. If all three actions are resolved and the conflict's still going, weapons can be chosen again.

You apply a weapon's modifier to your dice pool and/or successes only if:

If you're just contributing a teamwork bonus to the active player, your weapon doesn't matter.

These special bonuses on the weapon cards apply to their use during conflicts, but a weapon can also be useful as a tool when overcoming obstacles. Axes can clear brush and cut wood, knives are useful in all manner of handicraft, staves can aid in balancing or support you on a long journey.

If the GM thinks a weapon would make a useful tool, you'll get the standard +1D bonus for having one, regardless of what the weapon does for you in a fight.

Non-Fight conflicts have their own types of weapon; journeys have maps and guides, arguments have evidence and character roleplay, military exercises have preparation and strategy. These weapons are also detailed in the "Gear for Conflicts" section, but they've got a lot less of a standardized appearance so there aren't weapon cards for them.

Aside from that, choosing and using them in a conflict works the same way as conventional weapons do in a fight.

Not the answer you're looking for? Browse other questions tagged weapons mouse-guard or ask your own question.

24
Could a mouse kill a bear?
29
How do Mouse Guard and Burning Wheel differ?
11
Attack versus Feint
3
Rapiers for Fighters Light or One Handed Weapon?
9
Are the Mouse Guard cards compatible with Torchbearer?
7
How to roleplay maneuver in a journey conflict as the GM/season/environment
2
What is the criteria for light weapon?
6
How can I better reward progression in a Mouse Guard campaign?
8
How does weapon proficiency work?