I am looking at creating a few new categories of weapons just to add a bit more reason to spend money on mundane equipment in the early game. Poor, and Masterwork.

They won't be magic, and I will probably make poor and masterwork versions of magical weapons as well, but I don't want a masterwork weapon to overshadow a magical +1 weapon.

When rolling a D20 the accepted average seems to be that advantage equates to a +4/+5 bonus, so what would that average bonus be on damage rolls? Given the different damage dice it is probably best to stick with a 1d8 weapon in this case, but I would assume the advantage is less for small die, and more with larger die.

A good answer might include an anydice table or some kind of maths, but I find all that really hard to get my head around, so an answer along the lines of 'advantage when rolling a d8 equates to roughly x' is the best for me, with explanations in words rather than maths if you need to add anything else.

A really good answer will include anything else that I might need to consider but haven't added to the question.

Note: I have seen this question, which is similar, but if the answers there happen to cover my question I don't understand them.

Here's a quick AnyDice program to show the effect of applying the D&D 5e (dis)advantage mechanic (i.e. roll twice, pick lowest/highest) to dice of various size. Based on the summary results, here are the average rolls in each case:

(This is lower than the often quoted "advantage ≈ +4 or +5" rule of thumb for d20 since it's based on the average roll rather than the chance of meeting a target DC that's typically somewhere near the middle of the 1–20 range. Due to the way the advantage mechanic works, it has the biggest effect compared to a flat bonus for mid-range target numbers.)

Addendum based on comments: For damage rolls with multiple dice, like a 2d6 greatsword, the magnitude of the effect depends on how you choose to generalize (dis)advantage to rolls using multiple dice. Off the top of my head, I can think of at least the following options for rolling NdX with (dis)advantage:

This AnyDice program shows the average result of each of these methods of rolling NdX with advantage. For example, for 2d6 the averages look like this:

For method #4 the average difference between a normal roll and one with advantage is of course the same as for a single dX roll, while for method #1 it's N times that. Methods #2 and #3 tend to be somewhere in between. In fact, for N = 2 method #3 seems to give results exactly halfway between methods #1 and #4, although this does not continue to hold for higher values of N.

I am aware that you did not ask for a math-based answer, and Ilmari already did a wonderful job, but I decided to provide one anyway, since in my honest opinion the math approach is one of the best strategies to generalize and it allows one to use the results in other contexts.

Using the Order Statistics is the way.

When one has to deal with advantage/disadvantage mechanics, one has to consider the beloved order statistic. The formulae are given below, while at the bottom of this answer I provide the mathematical details. 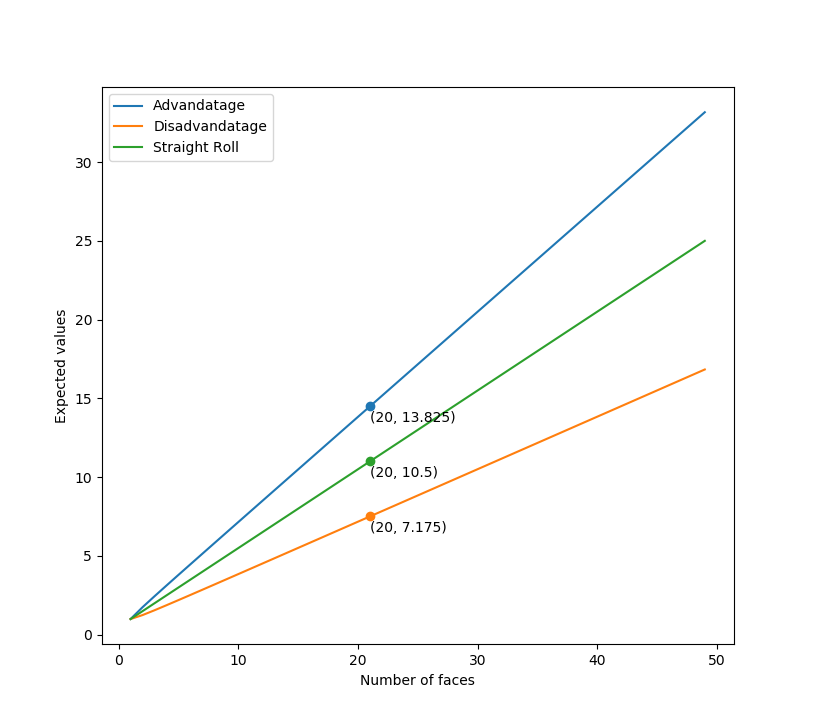 Consider a fair die with \$d\$ faces: since the outcome of such a die follows a discrete uniform distribution, the chance of getting the result \$x\$ is given by the probability density function (pdf) \$f(x)=\displaystyle\frac{1}{d}\$ and the cumulative distribution function (cdf) of \$x\$ is \$F(x)=\displaystyle\frac{x}{d}\$. Recall that the cdf \$F(x)\$ provides the probability of getting a result of less than or equal to \$x\$.

\$^1\$ The computation is left as an exercise for the reader.

Not the answer you're looking for? Browse other questions tagged dnd-5e statistics dice advantage-and-disadvantage .

18
Natural 20 when rolling with disadvantage
1
Improving “fumbles” when using pools dice in TROS, part 2
15
How does replacing Advantage with a flat +2 affect Champion critical hit damage output?
11
Advantage on damage rolls - is it still balanced?
10
Would it be fair to use 1d30 (instead of rolling 2d20 and taking the higher die) for advantage rolls?
6
How would this House Rule for combined Advantage/Disadvantage Impact Rolls?
1
How much would a weapon cost that grants advantage on damage rolls?
17
Is it mathematically better to roll one attack or two with disadvantage?
18
What deals more damage on a weapon, +1 to hit or +1 to damage?