I'm trying to model my RPG system in Anydice. The rules are:

I've been working on this for an hour and can't figure out how to make it work. I tried modeling this literally in the code, but it came back with up to 60 successes instead of 3, so I clearly did something wrong. link to program

I was able to solve this with help from Someone_Evil's comment.

have the function work out the number of successes, which we can handily do by comparing our ROLL sequence to our TARGET number.

I didn't know AnyDice could do this, so now I have a working program.

Your advantage and disadvantage mechanics are actually equivalent to the following ones:

or even to the following ones:

The nice thing about these alternative formulations is that they're significantly easier and more efficient to implement in AnyDice, while still giving the same results:

One generally useful performance trick I'm using here is defining a custom die X that rolls 1 with the probability of a d20 roll being a success (i.e. <= N) and 0 otherwise. You can think of it as a relabeled d20, with the successful sides labeled as 1 and the unsuccessful sides relabeled as 0.

Ps. The same trick can also be used to optimize your original program:

(Note that comparing a number and a sequence in AnyDice checks whether any number in the sequence satisfies the comparison, so e.g. if 0 = ROLL means "if ROLL contains any 0".)

The issue you're running into here is that AnyDice loves summing numbers, especially when outputing. The output you're getting is the sum of the dice, not the number of successes (hence going up to 60). The easiest way around this, is to have the function work out the number of successes, which we can handily do by comparing our ROLL sequence to our TARGET number. Also handily, to not have to worry about actually shuffling around the sequence to get the reroll, we can simply add the new roll and subtract a 1 (to compensate for the roll that should be removed). We also know that if we don't reroll, we have no successes. The resulting function then becomes:

Which we can test over a range of targets (you'll want to limit the number in that range so it doesn't time out):

And see the transposed graph to see how the probability of a given number of sucesses vary with the target. 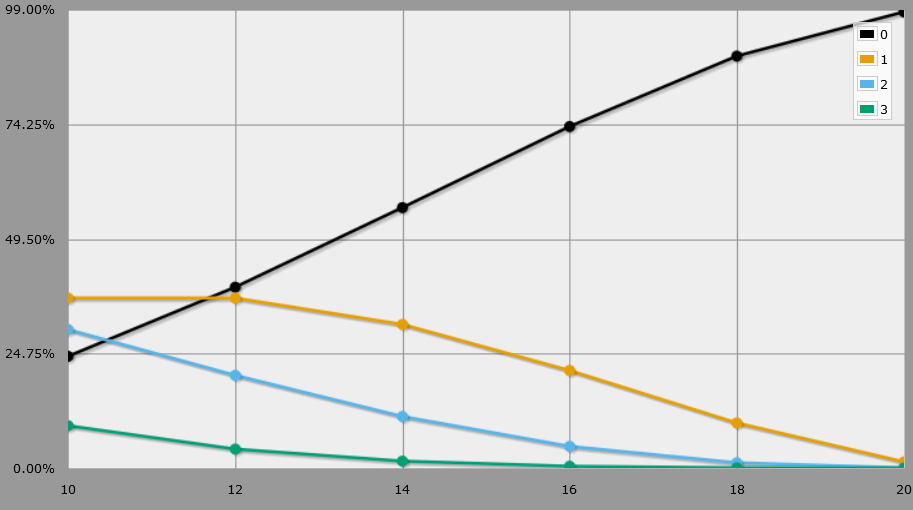 Not the answer you're looking for? Browse other questions tagged statistics anydice .

14
Help Writing an AnyDice Function for a Weird Dice Mechanic
7
Modelling an opposed dice pool mechanic in AnyDice
6
Modelling opposed dice pools with a swap
6
Rerolling and replacing the lowest result in Anydice
6
How can I create an AnyDice function where I can roll 3d20 and then lower the results of the individual die rolls?
10
How can I calculate the sum of 2 random dice out of a 3d6 pool in AnyDice?
1
How can I model the probabilities for highest and lowest of opposing dice pools?
7
Is it possible to model these probabilities in AnyDice?
3
Disadvantage/adversity dice pool mechanic that knocks dice greater than 1 out of the pool and adds 1s to it
4
Modeling a system where you roll Xd20 and take highest, plus the second highest if the first one is a critical, etc