Is a Sidekick's base +2 proficiency bonus already included in their source stat block?

I'm confused by the Sidekick rules in Tasha's Cauldron of Everything. In the "Gaining a Sidekick Class" section, it says this:

As a specific example, a Bandit has a Dexterity bonus of +1 and his two attacks (scimitar and crossbow) both have a +3 bonus, implying a pre-existing proficiency of +2.

So when he becomes a sidekick and gains a level of Expert, do his attacks still have a +3 attack bonus or do they suddenly become +5?

+2 should NOT be added at Sidekick level 1

NPCs and monsters actually already have a proficiency bonus before becoming a sidekick, it just isn't always shown in their stat block. D&D Beyond does include it, as well as some printed sourcebooks, but it seems to be entirely dependent on the monster's Challenge rating based on this table available in the Basic Rules (p. 112): 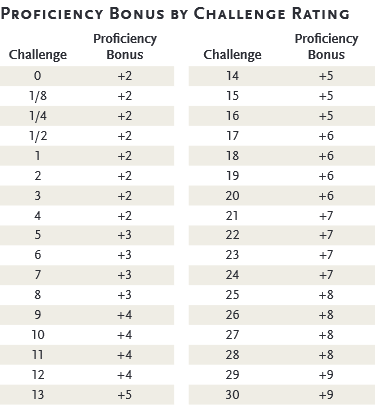 Sidekicks (officially) can only be made from monster stat blocks with Challenge rating 1/2 or less, so their proficiency bonus doesn't "increase" when they become a level 1 sidekick, and thus no change to the stat block is necessary.

Not the answer you're looking for? Browse other questions tagged dnd-5e sidekick .

11
How exactly does Might of the Master apply your proficiency bonus to your Homunculus Servant?
7
Utility of Proficiency Bonus in Statblock for Summoned Creatures without Proficiencies?
4
Can beasts use the Charge feature twice with Extra Attack?
13
How many hit dice does a Sidekick start with?
17
Does the Construct Spirit from the Summon Construct spell cast at 4th level have 40 HP, or 55 HP?
25
Is there a reason not to take the optional class features from Tasha's Cauldron of Everything?
8
Does the Beast Master ranger's Primal Companion optional class feature allow the beast to take two actions in a single turn?
12
How does armor and weapon proficiencies work with sidekicks?
7
Can a Druid wildshape into a Bestial Spirit form, and if they can, what are the mechanical effects of doing so for the Spirit's stat block?
6
Is the Steel Defender's Force Empowered Rend affected by items that add +1 to Spell attack rolls?