How many dice fit in the sun?

In the itch.io description of Pidj's RPG "The Sun's Ransom", it describes the core mechanic, which relies on using the cover as a prop (emphasis added):

Resolution is via a simple dice pool: beginning with as many dice as can cover the sun on the cover. As play continues and vampires succeed in their Light and Joy tasks, dice are removed from the face of the sun, diminishing the vampires' power. The game is over when all dice are removed, leaving the vampires vulnerable and scorched.

I appreciate that the game can scale based on the size of my dice or how loosely I pack them! But while I wait for my physical zine to arrive, and because we know I'm hard on my dice, I'm wondering:

What's the most dice I'll need to play "The Sun's Ransom"?

I suspect that answering this will, at the very least, require clarifying things like:

I expect some of these sorts of concerns will be addressed directly by the text, but others will probably have to be argued based on narrative/thematic context and experience in play. Maybe there are play recordings which could help provide diverse insight, but I haven't found any.

The A6 page is 4 1/8 inches wide, so using the scan of the printed zine as a starting point: (ruler distorted by perspective; the best zoom I could get had the page a bit bigger than A6) 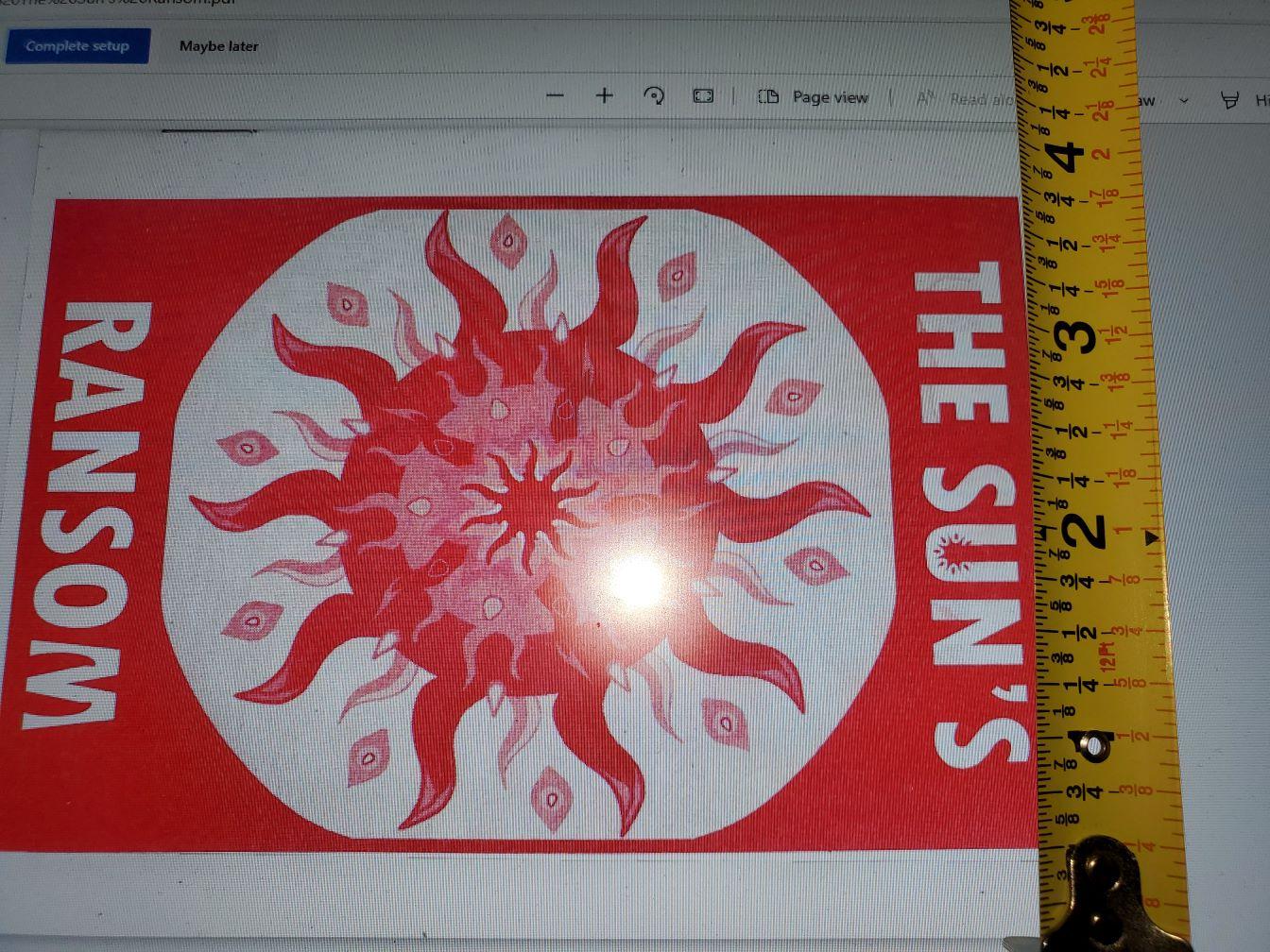 To "entirely cover the sun on the front cover, plunging the world into darkness" (per setup) it'll take 6 dice at its widest to cover the entire white disk of the sun, tapering to rows of 4 at the top and bottom (which are the left and right in landscape mode). 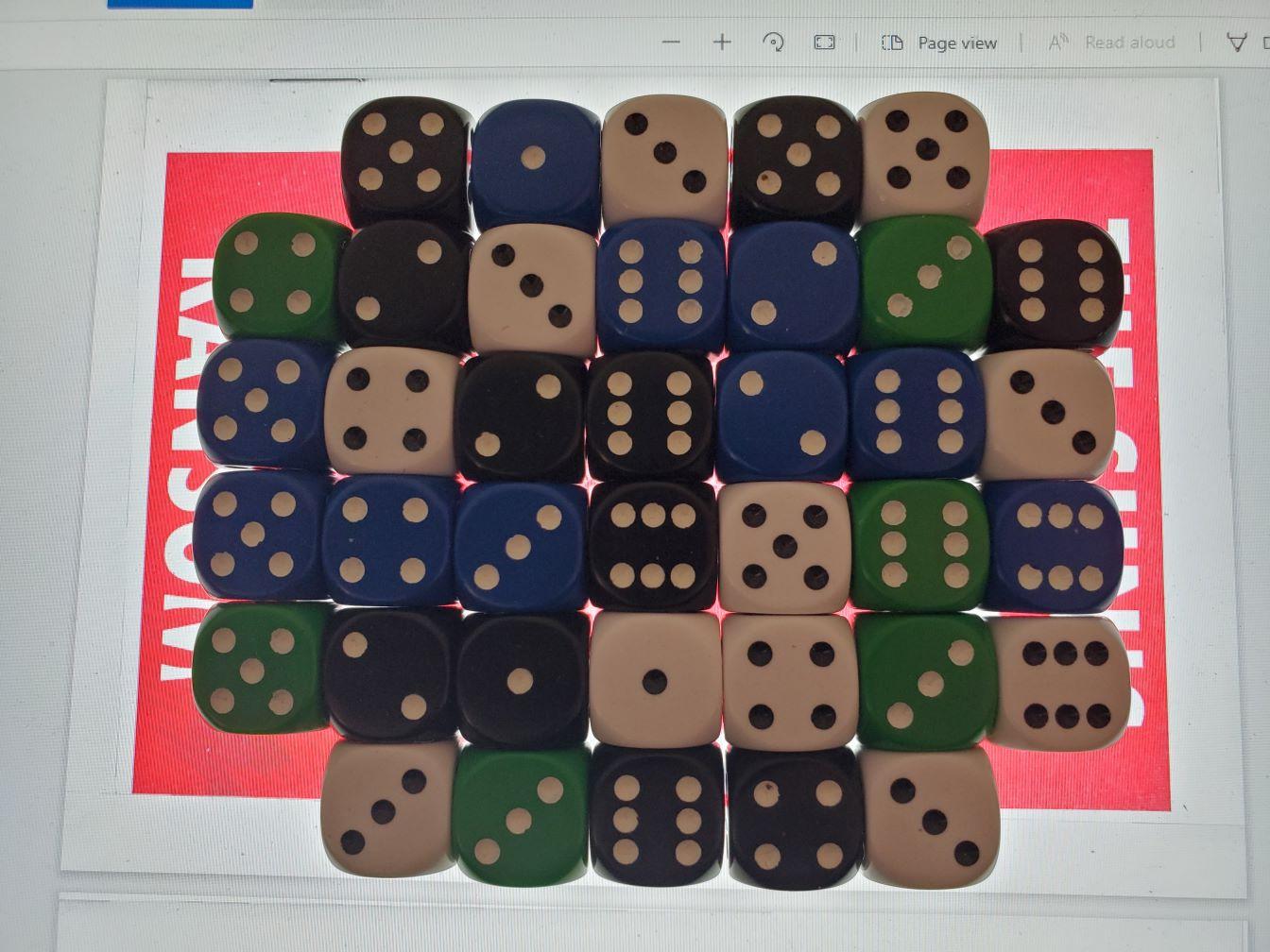 This is the best I could manage; the illustration is slightly too tall to be covered in its entirety by 6 rows of dice. 5 rows of 6 plus 2 abbreviated rows of 4 make 38 dice.

Now, as part of game resolution you're rolling all of these and piling the remainder back on the sun, so this might seem a bit much to keep track of.

I'd suggest three workaday solid color blocks of dice to start with (36) and two special "grand finale" dice, with maybe a bowl or large cup with a fanciful label to place dice into, starting with the solid colors, as you lose them to Light & Joy.

All subsequent placings don't have to worry about packing because your first Light & Joy roll will have removed some and so the sun should be exposed. (While it is technically possible to remove no dice by setting a dice goal of 1 and rolling no 6s, this will happen slightly less than 0.1% of the time so it's not worth worrying about.)

The Illustration. If you only want to cover the illustrated sun, with its rays and flares but ignoring the white disk, you can get away with one core column of 6, flanked by offset columns of 5 and 4, for a total of 24 dice. (Please excuse the lack of brilliant red. The scan of the zine is larger than A6 resolution, so I had to print out the actual zine PDF, which had the correct dimensions but was black and white.) 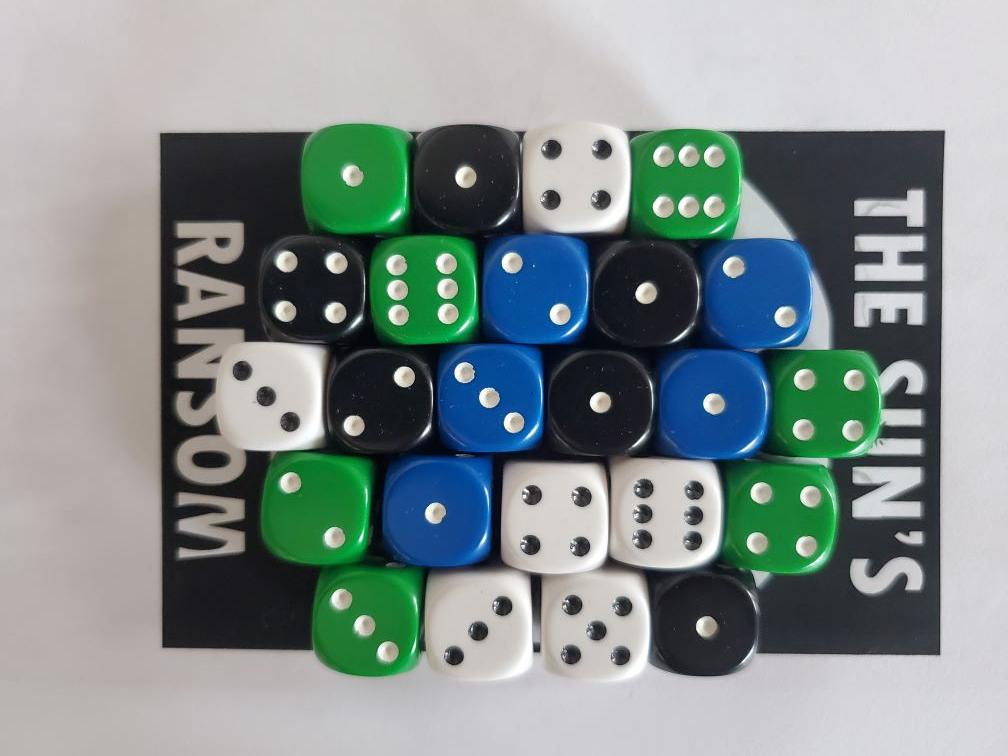 Even though this is two bricks exactly, I'd still encourage having some special ones for the grand finale if you've got them in your collection.

The Sun At War. In terms of bulk dice, you may only have access to the 12mm dice commonly sold for use in d6 wargames like the Games Workshop lines. This will necessarily use more dice than a 16mm covering, but I was able to cover the illustration of the sun with 42 of these dice: 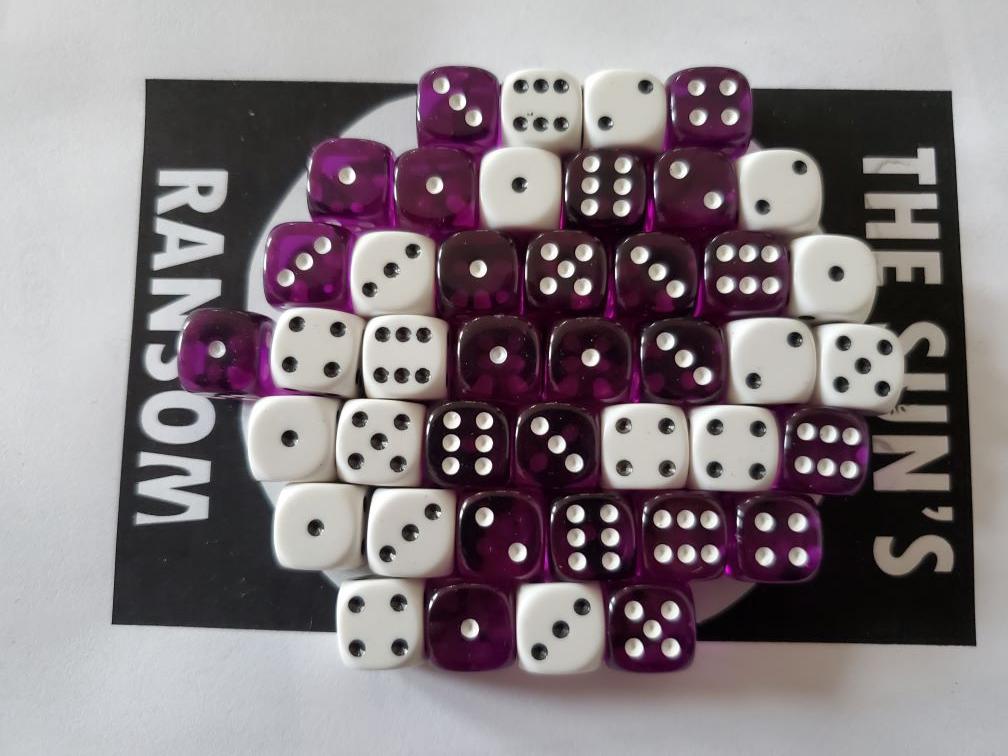 These dice are usually sold in bricks of 36, so that's slightly more than one, but you might be able to cheat off some dice around the edges and use one brick of 36.

The Longplay. Or if you want to necessarily use more dice, 38 dice don't technically "cover" the white disk. There are still junctions at the rounded corners of the dice where the sun's poking through. If you wanted to do a proper job of sun-covering, you'd technically need a second layer: 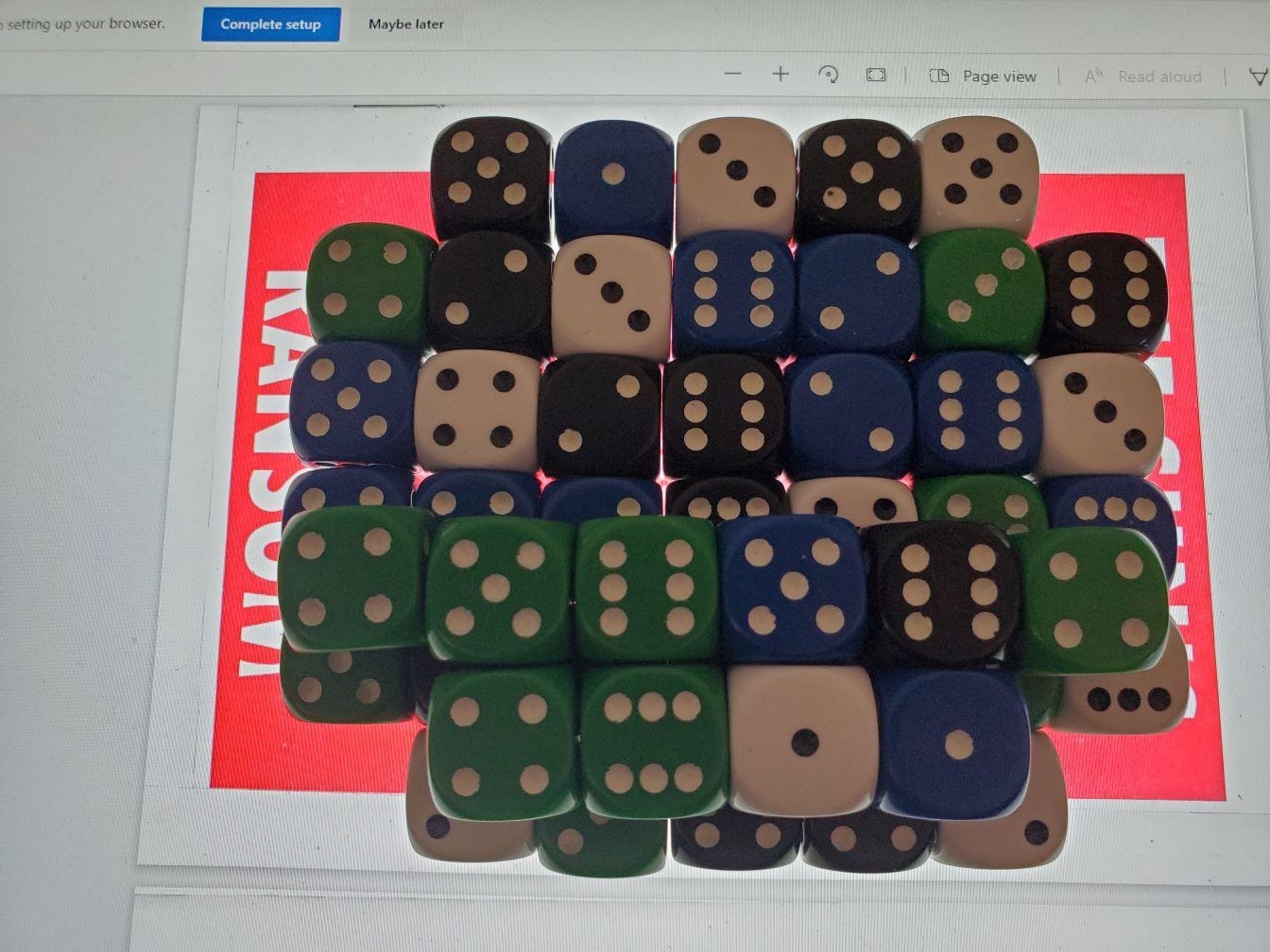 The example of play/comedy option. If you're demonstrating how the game works, you can block out the "sun" on the cover with many fewer dice: 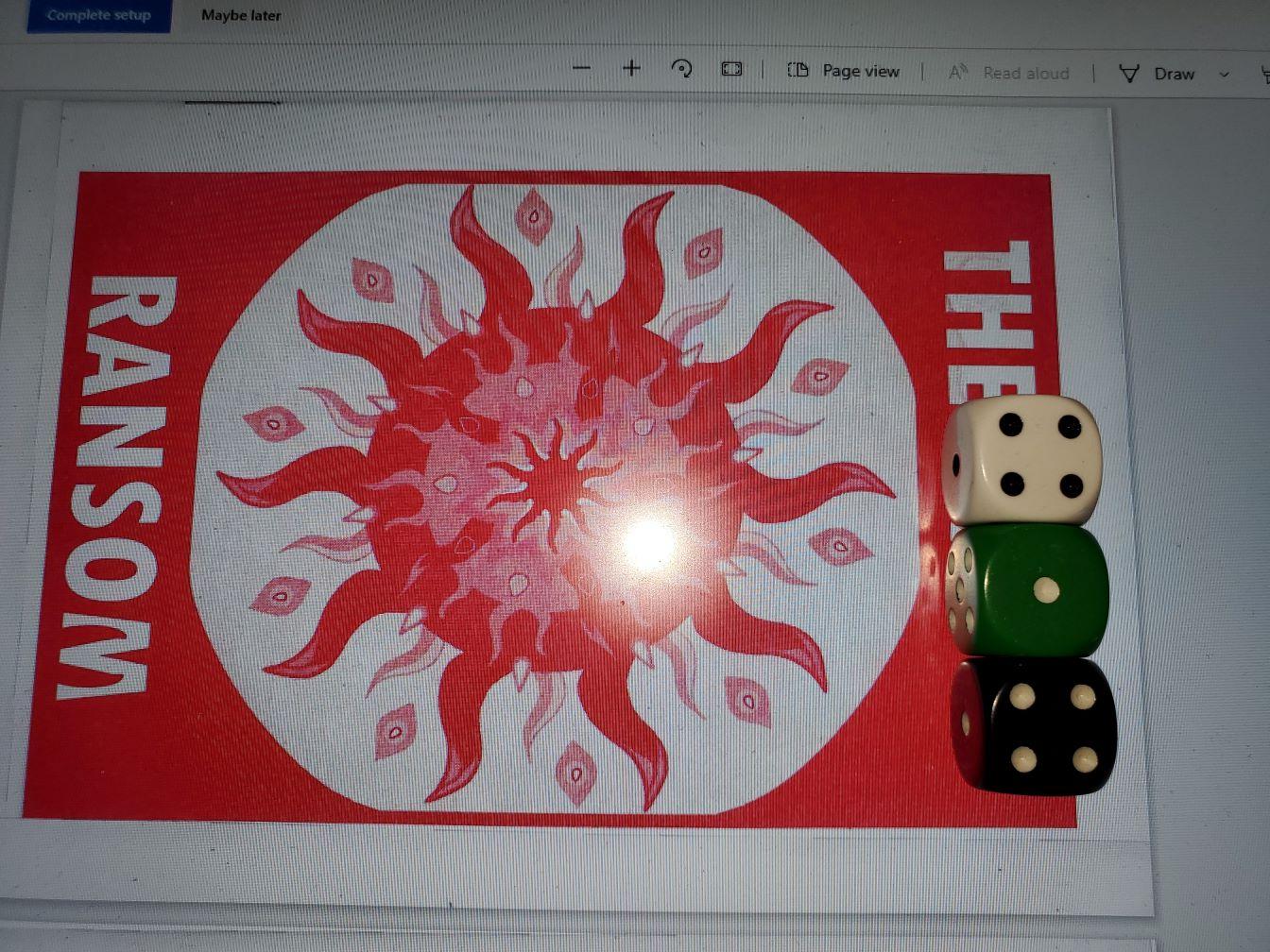 though I'd suggest using at least 6 dice with maybe a goal of 2 to have a chance you'll get at least one success during the demo.

Not the answer you're looking for? Browse other questions tagged dice props the-suns-ransom .

9
How many dice do you need for Dogs in the Vineyard?
11
What's the benefit from upgrading green dice to yellow dice?
58
Is there any known limit for how many dice RPG players are comfortable adding up?
3
How to reduce the variance of a dice pool mechanic?
12
How do I read polyhedral dice?
32
How many sets of dice do I need for D&D?
17
How do dndbeyond.com's dice work?