Are There Alternatives to Dice Discussed in any D&D Literature?

On a family camping trip we found that we had left our dice on the kitchen table at home, and we have a family tradition of not using phones or other devices while camping.

And yet D&D must be played.

We came up with what we thought were clever ways to recreate dice rolling, but the question did come up if any D&D literature ever discusses what to do if dice aren't available.

Are there non-digital dice alternatives that are discussed in any official, first-party D&D texts of any edition?

There's this Q&A about alternatives to dice with many options to replace dice.

According to the official DND site: "Shortages in the supply chain lead to some copies of the Basic Set shipping with a cardboard chit sheet instead of dice." This sheet came with rules on how to use it too:

Throughout the rules, references are made to generating random numbers by rolling dice. This is because DUNGEONS & DRAGONS was designed with special 4-sided, 6-sided, 8-sided, 12-sided and 20-sided dice. If you do not have immediate access to these multi-sided (or polyhedral) dice, you can use the chit system of random number generation, which is described below. Both give the same results.

To use the numbered chits, cut off the laminated portion of the cover fold-out, and then carefully cut along the lines dividing the chits. You should have 90 cardboard chits. Notice that they are printed in different groups: 1 to 4, 1 to 6, 1 to 8, 1 to 10 (two sets), 1 to 12, and 1 to 20 (two sets). These duplicate the various dice-types used in the game.

To use chits, place each different type in a small container (perhaps a small paper cup), and each time a number generation is called for, draw a chit at random from the appropriate container. Be sure to return the first chit before another draw is required. In this manner, any of the required die rolls can be easily duplicated. If a percentage roll is indicated, simply draw from the 1 to 10 chits two times, treating the chit printed "10" as "0" so any number from 01 through 100 (or "00") can be generated.

With these systems, a aide range of random possibilities can be easily handled. For a linear curve (equal probability of any number) simply use the appropriate die or chit type for 1-4, 1-6, 1-8, 1-10, 1-12, or 1-20. If some progression is called for, determine and use the appropriate die or chits (for instance, 2-7 would call for a draw or roll of 1-6, with 1 added to the result).

For bell curves (increasing probability of numbers in the center, decreasing at both ends), use same die or chit type two or more times, or even use two or more different types of dice or chits. The curve of three 6-sided dice, or three draws from the 1 to 6 chits) is a good example of a bell curve. 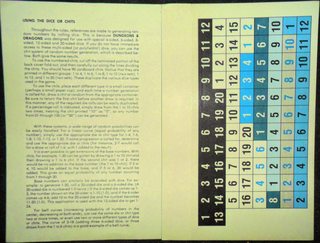 This article was published in Dragon Magazine 007 (published by TSR who also published DND), and explains…

WHAT TO DO WHEN THE DOG EATS YOUR DICE, or Some Other Calamity Befalls you Twenty Minutes Before the Game Club Gets To your Place

The following table is from FIGHT IN THE SKIES. The column on the left is percentages and numbers needed to get them, white the figures on the right are the actual probabilities. (I.E., if there is a 10% chance of an encounter, a roll of "9" indicates that it occurs. The actual percentage chance of rolling a "9" with two standard dice is 11.1%.)

CHITS IN A JAR

All that is needed is a jar with a wide mouth, (lest we find ourselves in the position of Aesop's monkey and the coconut) or some other suitable container, and the appropriate number of blank counters, poker chips or slips of paper marked with the numbers you need to generate. Players blind-draw for results.

Many of the newer and more complex calculators, such as the TI-SR51-A have various function switches that will display random numbers when pressed either singly or in certain combinations. Because of the great diversity in calculators, you are advised to check the instructions to determine how, or if, yours will do it.

Rather self-explanatory, don't you think?

There are any number of children's and family games that use a spinner, using many different ranges.

Similar to the preceding. NOTE: in an obscure study financed by a government grant, it was conclusively proven that the dime is the ideal coin to flip. The heavier coins have a greater incidence of injuries to the nail-bed on the thumb after 40,000 flips or more. Of course, this excludes the silver and half dollar, which can bung-up your thumb much sooner than that.

The player/judge covers his eyes and opens a copy of his phone book and points his finger. Some house rules prevent the use of address numbers, while others recognize both address and phone numbers.

A wooden Lazy Susan is required, as well as darts and several sheets of stock listings from a newspaper. To use this method, affix one of the stock listings to the surface of the Lazy Susan. There are two methods of using a Lazy Susan in this manner; one requires that it be fixed to the wall, the other doesn't. In any event, the L-S is spun, and a dart either thrown at, or dropped on, it; the number skewered is your number.

This system counts the birds that fly by. It is NOT useful in areas having large concentrations of starlings, or in waterfowl flyway areas in spring and autumn. It is also inconvenient after dark.

MOUSE IN A MAZE

This system uses mice in a maze, with numbered reward areas. All you need is a little plywood and a couple dozen half starved mice or rats. (If you make the reward too large, each mouse or rat is only good for one or two trips before satiation. If you use too little, the mice will just say to hell with it.

This system uses Mexican jumping beans as number generators. Each bean is marked, and all the beans are chilled to precisely 47 °F. At the start of the game, the beans are dropped into an aluminum pan on top of a hotplate. When a number is needed, the next bean that jumps is it.
This practice was finally discredited by an organization known as “Frijoles Nacionale”, an obscure collection of misfits, misanthropes and bean freaks formed in the late 1930's in Mexico to stop bean jokes, considering them offensive to beans. Prior to their success, yet another pressure group tried to outlaw the use of jumping beans. Calling themselves the Society for the Prevention of Cruelty to Larvae, they spent thousands of dollars in their futile efforts. Think about it; would you listen to someone that represented a group such as the SPCL? (Well, you have read this far, so don't be too smug.)
The practice has died out in all but two areas; the northeastern US and among the Vapid Indians of the Mojave Desert. The former is considered a local, cultural aberration, while the latter is attributed to the low average IQ of a Vapid Indian.

In Dragon Magazine #144, the article Cheating Made Easy mentions handheld computers, calculators, and the Dragonbone dice roller (and how to cheat with them):

The article that follows that, Cheating Made Even Easier, mentions chits and cards.

Cardboard Chits in the Basic Set

According to The Acaeum, around the time of the fifth printing of the Basic Set (c. 1979) and again in the seventh printing, TSR was experiencing a shortage of dice and could not package them with the boxes as fast as they were shipping games. They turned to cardboard chits with numbers printed on them, but also included in the boxes a "how to use" description of playing with the chits (this was mentioned in the Q&A you linked to in this answer and this answer).

It does not seem that this 'how to use' description was part of the rulebook itself, but I think it would qualify as officially published D&D Literature.

This 'how to use' description is reprinted by Crimhthan_The_Great on Dragonsfoot:

...To use the numbered chits, cut off the laminated portion of the back cover fold-out, and then carefully cut along the lines dividing the chits. You should have 90 cardboard chits. Notice that they are printed in two different groups: 1 to 4, 1 to 6, 1 to 8, 1 to 10 (two sets) 1 to 12, and 1 to 20 (two sets). These duplicate the various dice-types used in the game.

To use the chits, place each different type in a small container (perhaps a small paper cup), and each time a number generation is called for, draw a chit at random from the appropriate container. Be sure to return the first chit before another draw is required. In this manner, any of the required die rolls can be easily duplicated. If a percentage roll is indicated, simply draw from the 1 to 10 chits two times, treating the chit printed "10" as "0" , so any number from 01 through 100 or "00" can be generated...

An unpunched page of chits can be seen at Wayne's Books description of the Holmes Basic Set here (scroll about three quarters down, at the very end of the article but before the comments).

My Basic Set was for Christmas of 1982 and from somewhere around the 9th to 11th printings - I got the dice with the marking crayon and have never seen the chits first hand. I once forgot my dice on a summer trip to my grandparents' cottage. My uncle and I played to similar effect with Scrabble tiles with each letter assigned a numerical value.

Not the answer you're looking for? Browse other questions tagged dungeons-and-dragons statistics dice .

69
How do you play D&D when we don't have dice to play with?
31
Is it possible to emulate common polyhedral dice rolls using just a d6, and if so, how?

28
Are Earthdawn's dice mechanics as unfair and wonky as my player claims?
7
Are there any guides for using Statistical Analysis for RPG optimization?
12
Are d8, 10, 12, etc. dice, fair dice?
3
What's the probability of getting three matching faces in any one roll of four Fudge dice?
8
How are a dice pool's probabilities affected by being allowed/forced to add dice then drop high/low dice?
58
Is there any known limit for how many dice RPG players are comfortable adding up?
5
Is there any practical or mathematical difference between player rolling vs. DM rolling?