Does Faerûn have timezones?

In #DnD5e a lot of magic items reset at dawn.

Dawn is a geographically-dependent time. What time "dawn" occurs changes based on where you are.

There is nothing stopping you from teleporting somewhere, waiting a few minutes for dawn, then teleporting back.

And whilst I doubt this would be an approved method of resetting magic items (or cost-effective, given the price of high level teleportation spells), it got me thinking...

Does Faerûn have timezones?

And by timezones, I merely mean the sun being at a different position in the sky at different places on the world. I'm aware that timezones in the political sense may not have been established.

(Faerûn is just the world in most familiar with).

I thought this would add some immersion to teleporting, so the players would feel the distance they'd traveled.

Yes, unsurprisingly, as Faerûn is on a globe, it does.

With a small amount of hunting around, I find this old forum thread, by somebody with an answer:

We know that Faerun has time zones (mentioned in many novels when they teleport, most recently I think Farthest Reach/Forsaken House).

I was wondering if anyone knows how far out these time zones are spread, and also other things we may take for granted (e.g. assuming there are 24 hours in a day? That the sun rises in the east?)

The Forgotten Realms FAQ, linked later in that thread covers this well, using the circumference of Toril (although not the same circumference as the one here):

That being said, I can't place a source for that circumference of 23,400 (I presume units of miles), so if instead you replace it with the circumference 17,500 miles, you get a time zone width of ~730 miles.

As well as the above calculation, one of the users from that original thread has recreated the map of Toril with timezones 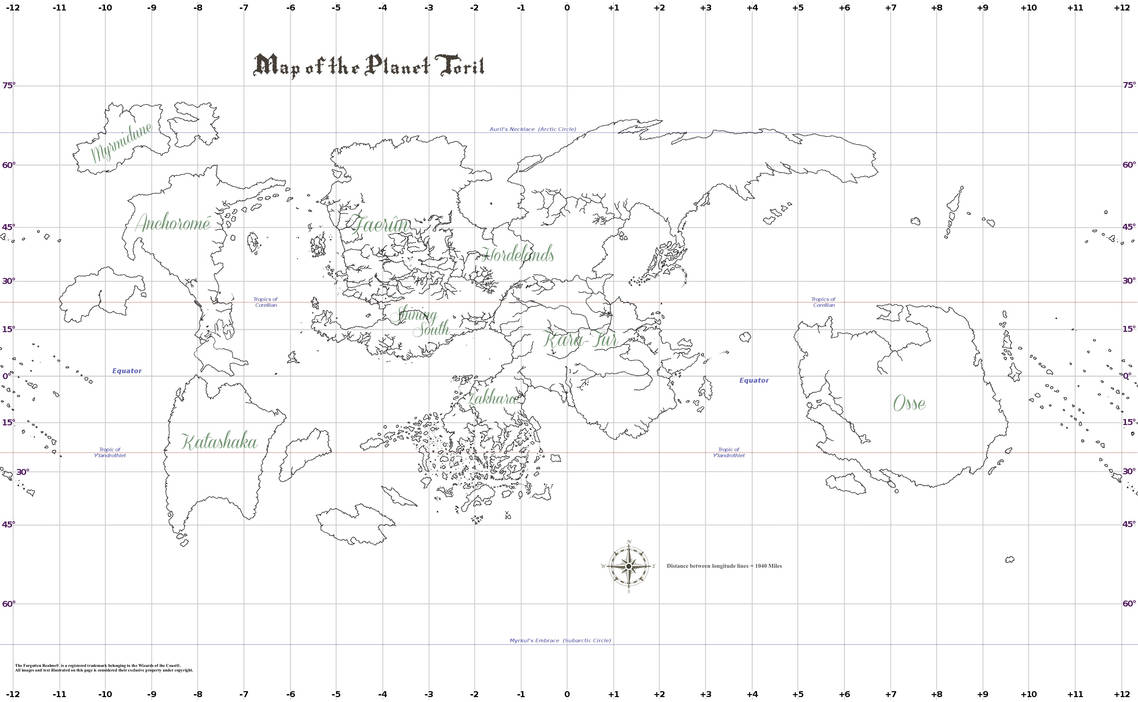 So in conclusion, yes to time zones, and they seem to be between 700 to 1000km wide at its latitudes.

Faerûn does not have time zones the way the modern-day Earth has time zones.

But neither did Earth until about 200 years ago.

That’s not to say that without time zones that it’s the same, for want of a better word, time, everywhere on Faerûn or Earth. Both are planets spinning on their axis while orbiting a star so they have a day-night cycle and when it’s dawn in Cormyr it’s still night on the Sword Coast.

So, the "cheat" of chasing the dawn with your magic item is as valid as your DM lets it be.

Time zones are a product of industrial society (which Faerûn isn’t) and particularly a society with rapid transport that requires synchronisation over large distances. Here on Earth, it was the development of trains that required time zones.

In pre-industrial society, time was a pretty imprecise thing at scales less than a day. It was dawn when the sun came up, morning when it was going up, midday when it was overhead, afternoon when it was going down, dusk when it set and night after that. In Europe, the day was divided into 12 hours and so was the night and that meant that hours weren’t the same length except on the equinoxes. An hour was one-sixth of the time between dawn and noon, or dusk and midnight, not 60 minutes of 60 fixed-length seconds.

When clocks that used clockwork were developed, the hour was redefined to be a fixed unit of time so sometimes there were more than 12 in a day/night and sometimes less. However, clocks were big and not very portable, particularly since most were built into clock towers. They were set to local time, usually by looking at the sun saying “it’s about noon, let her rip”. The only places that were really accurate about timekeeping were ports and they were only interested in precisely when noon was. Most ports would fire a gun or drop a ball (which is where the NYE Times Square thing comes from) at precisely noon to allow ships to set their timepieces. These were initially hourglasses and the effort to develop an accurate clock that would work on a ship was huge. Land-based clocks used pendulums and these don't work on ships because ships move and wreck the pendulum's motion. It was really important to know what time it was where the ship came from because it was the only way of working out your longitude (east-westness).

This is probably the accuracy at which Faerûn operates. When the fastest you can move from one place to another is the speed of horse (some high falutin wizards aside) and you have no way of keeping time while you travel it doesn’t matter that the time in different places isn’t synchronised.

In any event, time zones aren’t accurate. Today, 21 September 2021, solar noon in London is at 12:53 pm but in Birmingham, it’s at 1:00 pm, 7 minutes later because Birmingham is west of London. Noon is not anywhere near 12:00 pm in either place because the UK moves their clocks forward an hour in summer. So, while BST gives the “right” time (today, at least) in Birmingham, it’s completely wrong in London - 7 minutes wrong all day.

The reason we have time zones is that we invented the train.

Once long-distance train journeys happened, the companies that operated them needed to operate them to a timetable and they weren’t going to faff about with the minor issue that the people in Birmingham thought it was a different time from the people in London. Even though they were right - the time in Birmingham is different from London.

So railway time was born. And the railway companies built stations. With clocks. All set to the same time. And these competed with the church and town clocks that were set to the right local time. And they won. Eventually.

And then, as railways and steamships spread further and portable clocks became more accurate it became necessary to synchronise time across the whole world.

There are 2 ways of doing this. One is to pick a time and decide that is the time everywhere. That’s what China does: even though it stretches across 5 “time zones” everywhere is on Beijing time.

The other is time zones. Earth needs them. Faerûn doesn’t.

So, Earth and Faerûn are globes orbiting a star. But what if your campaign takes place on an infinite flat plane? Or two infinite flat planes? Or on the severed hand of a titanic dead god illuminated by the sparkling droplets of that god's blood? Or on the inside of a Dyson Sphere? Or on Mechanus?

Basically, what happens if your DM isn't boring?

Not the answer you're looking for? Browse other questions tagged lore forgotten-realms or ask your own question.

23
Do magic items replenish at dawn even if, in your current place, there is no such thing as dawn?
9
How large is the planet of the Forgotten Realms?

7
Does Faerûn have a Norse- or Celtic-analogue culture?
6
What is the world of Faerûn like after the events of Rise of Tiamat?
29
How can I explain a race from Eberron showing up in Faerûn?
12
Where are the heroes of Faerûn during Tyranny of Dragons according to other adventures?
8
Is there a list of Faerûn equivalent of Christmas traditions?
8
What regular Faerûn-wide events are there?
27
Faerûn: Why is there a gap in the Trade Way?
6
Are there any Chosen left in Faerûn following the Second Sundering?
7
Does the Halfling deity Brandobaris have any known offspring?