Is Deadly Aim worth it?

Deadly Aim is very similar to Power Attack in PF1, in that it reduces your chance to hit in exchange for some extra damage. In PF2 however the enemies' AC increases together with your attacks, so -2 penalty seems really big against +4 damage, espcecially for an 8th level class feat.

Is it a simple damage increase, circumstantial, or a trap?

Is there some specific build this is very good (or bad) for (bow/crossbow, precision/flurry)?

I've run the numbers for a Ranger vs at level Moderate, High, and Extreme ACs. I don't have a magic formula for you (I'm not so good at that, and Medix2's answer is way better than I could do there), but I do have magic graphs!

The TL;DR: Deadly Aim is basically only worth it for non-Precision rangers when fighting against extreme AC targets. This means if gives you decent damage increases against bosses as well (i.e. higher level enemies).

Each chart looks at four types of rangers. A ranger doing a normal attack, a ranger doing a deadly aim attack, and then both of those again, but factoring in Precision Edge. The Precision Edge stuff is actually a little misleading, because you have two more actions to apply that! Maybe follow up with Hunter's Aim or something. All of these consider a ranger using a composite shortbow and automatic bonus progression. Every time we get a +1 potency bump, I add another d6 damage, assuming that you add another damage rune to your weapon (e.g. Flaming, Frost, Shocking, etc.). This ranger also starts with 16 strength, but has 18 by the time they reach level 8, meaning they'll get +2 from Propulsive for the rest of their career.

EDITED Deadly Aim is not worth it, but only barely. It does start out as roughly equal (for levels 8 and 9 it technically does 0.05 more expected damage on the non-Precision ranger, but then never catches up). 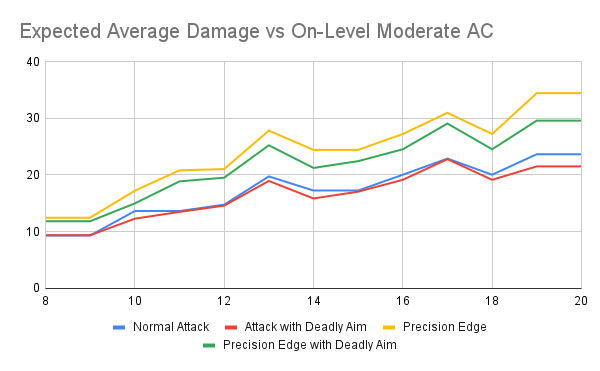 Deadly aim is actually rarely better here, and usually is equal. If you can get your enemy flat-footed (or grab a bonus to hit), then it's probably going to look more like the Moderate AC chart. Without those, Deadly Aim is a trap. 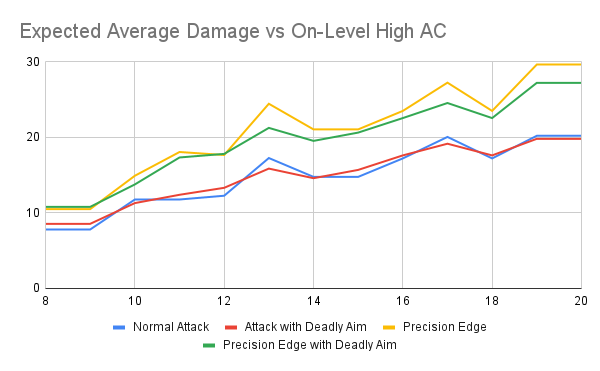 Deadly aim gets to be the same or better than normal for all levels for a normal ranger. The Precision ranger finally sees Deadly Aim being okay. Extreme AC corresponds roughly to a High AC of two levels higher, so this is probably the chart to look at for boss enemies. 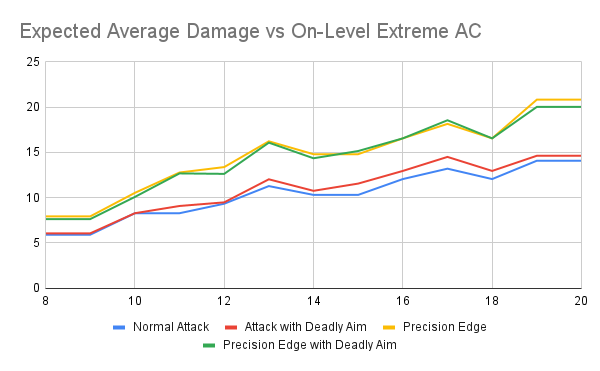 EDITED Deadly Aim seems to be useful in situations where aiming, IRL, would be useful; when targets are harder to hit. I would use this less when you have bonuses to hit (somewhat intuitively), because those bonuses are likely to increase your crit range. But when you are only going to crit on a natural 20, it seems that Deadly Aim may actually be your friend. Indeed, that is the commonality behind all the places where Deadly Aim is useful for a high DC (on a normal ranger). The Precision Ranger has a higher base damage, which in turn makes Deadly Aim less worth it; if we extrapolate from that, Deadly Aim would be even more worth it when you have lower base damage (e.g. non-composite Shortbow, non-applicable damage runes (or non-damaging runes) on your weapon) or when you don't benefit as much from critting (i.e. you are using a Daikyu).

Note: this answer ignores the mechanics of critical hits1

Here "Maximum Average Damage" is the maximum value the average damage of a regular attack can have where taking a trade-off (like Deadly Aim) is still worth it.3

Thus, when the average damage of a hit before applying Deadly Aim is less than \$40h - 4\$, you would want to use Deadly Aim. To explain this in more detail:

Examples of using the formula:

Say your attack before applying Deadly Aim has a 50% chance of hitting; using our formula we get:

A table of values

It is worth noting though that this formula doesn't apply to all hit chances: It only applies if the minimum number you would need on the die for a hit before applying Deadly Aim is between 1 and 18.

To explain this, imagine you could somehow roll a 0 on the die and even that would hit. In this case, taking a -2 penalty to the attack roll will always improve your damage since you would effectively change your minimum roll on the die for a hit to a 2, which was the case originally anyways.

For the case of hitting when rolling a 19+ on the die, taking a -2 penalty means you would need to roll a 21 or higher (so you would need to roll a 20); and for the case where you need a crit in order to hit originally, taking a penalty to your hit chance won't change that and will always be the better option. Basically, this formula doesn't account for the changes experienced at the extreme ends which is why the 10% field has "???" in the chart.2 That said, I can't imagine having a 5, 10, or 95 percent chance to hit comes up very often.

2 Manually calculating the 10% hit chance case gets us a maximum damage of 2.

3 A proof of the formula used at the start:

We can look at the following equation:

It is a clear trap for Crossbow users, and bad most of the time for Bow users as well

The difference comes from Crossbow Ace1. Both it and Deadly Aim provide circumstance bonuses, so for Crossbows the attack penalty is the same, while the damage increase is smaller.

You use the optimal weapons and runes, and increase the relevant abilities at every occasion.

The damage increase in percentage from Deadly Aim varies from level to level, because either the base damage changes, or the increase the feat provides:

The biggest increase from the feat with a Crossbow comes at level 15, it is 12,33%. If you consider criticals too, even with 95% hit chance the attack without Deadly Aim does more damage.

This seems to be considered the best bow on the forums3.

Again the biggest increase from the feat comes at level 15, it is 32,65%. If you consider criticals too, you need a 75% hit chance for Deadly Aim to do more damage (by 1%, not what you expect from an 8th level feat). You need 85% hit chance for a 6% increase in DPR, this means you hit on a 4, very unlikely.

The precision bonus increases the base damage, so the ratio of the increase is even smaller. Consequently, Deadly Aim is even further behind.

No elemental damage from the property runes

If the enemy is resistant/immune to one of the runes, or you picked another rune4, the hit chance where Deadly Aim breaks even decreases somewhat, but rarely in the likely territory.

Not the answer you're looking for? Browse other questions tagged feats optimization pathfinder-2e statistics .

4
What is the expected hit chance?

5
How deadly are extras in Exalted 2nd ed.?
9
How much is a Second roll worth in Modifier Bonus
4
Is Bleed worth optimizing
2
Paladin archer looking to combat optimize my 9th level choices
2
Monk flurry and deadly aim, class bab or flurry bab?
3
Deadly Chill cold damage
7
Is the Deadly Aim feat worth it?
0
What to optimize a Skald for in such a party?
2
Hunter's Aim for Alchemist