Recommend a published encounter for 4e to demo its strengths to newbies! [closed]

Closed. This question is off-topic. It is not currently accepting answers.

I'm looking for recommendations for a published (but not necessarily WotC), fun, single encounter to introduce some friends to D&D 4E. We'll be using a virtual tabletop (Roll20 specifically) for it, and are planning a relatively short session of 2 hours.

Since most of the folks are new to 4e, I'm leaning towards fun rather than challenge, and I'd like to show off the system's strengths. Particularly, I'm looking for a single encounter that showcases the tactical, synergistic combat that 4e does so well. I'd be even more pleased if said encounter had a skill challenge (structured or otherwise) built in.

I should have 7 or so at the table, so something that works well for a large party is a secondary consideration. Lastly, I'd prefer an early heroic power-level, mostly to avoid overly complicated PCs.

To show off the way NPCs can synergise, you'd have to customize some of the goblins.

If Smiley Bob doesn't do it for you, I understand there are "Encounters" sessions: single-encounter delves designed for use in game shops. But you'll have to track one down physically if you want to try that.

There is also the Dungeon Delve book, which is a Great Big Book O' Short Adventures (one per level). You might be able to pull one encounter out of that, but I find most of them a little underwhelming.

There's a 1st level "something's amiss in the graveyard" single-session adventure hiding in The Open Grave: Secrets of the Undead, on page 56 called:

The Crypt of Col Fen 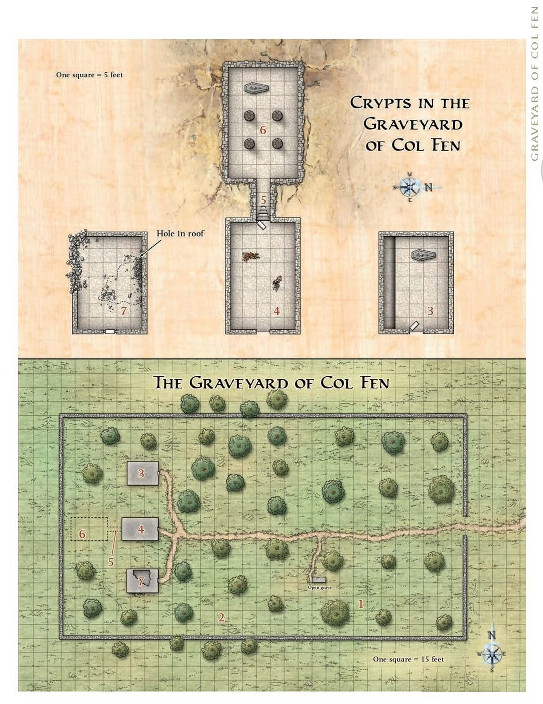 Graveyards and undead make for an easy transition to FRP for those not familiar with all of the tropes. Skeletons and Zombies, and Ghouls? Oh My!

Oh yeah, and I made a papercraft version of the graveyard and crypt for my players. The pics are all in this thread. Here's two samples: 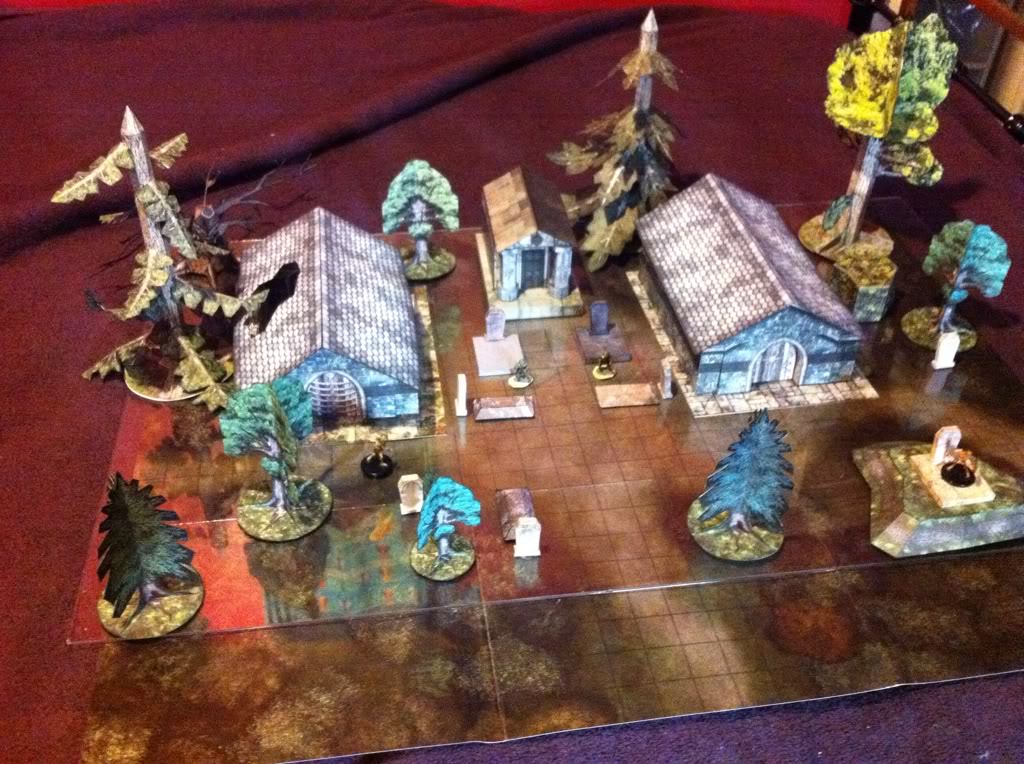 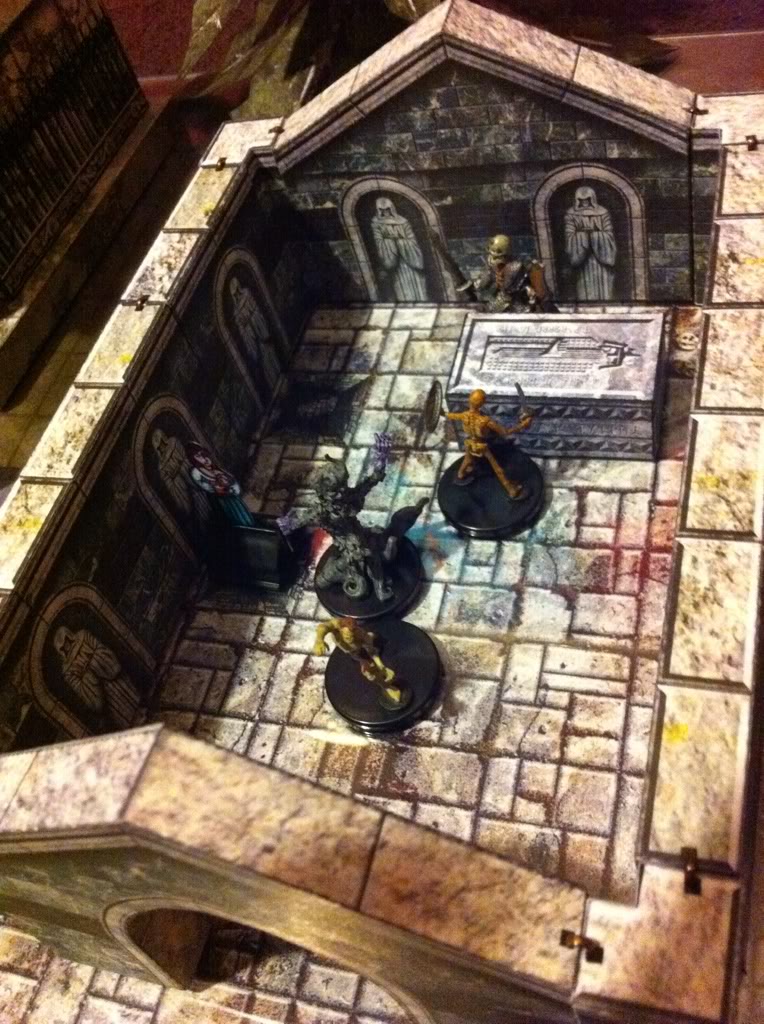 I must recommend the Red Box Starter Set adventure. I've played through it twice, once as a complete RP n00b and once in an online game as a more experienced player with group of new players.

It's an excellent L1 adventure, includes several iconic monster types (including a dragon). It has skill challenges and opportunities to avoid combat if desired.

Overall it's an excellent first taste of 4e. And if you want to continue this adventure, the Dungeon Master's Kit and Monster Vault can be used to continue through L5.

If you'd rather not spend money there are a couple of other options. There are several Chaos Scar adventures that Wizards has put out through Dungeon Magazine for L1. I've run several of these as a DM and they are almost all quite good. They give a solid taste of D&D and they are free.

The last option to present is probably the one I'd put the least amount of stock in. But I'd be remiss not to include it. The original starter adventure Keep on the Shadowfell. Wizards has updated this module (still not with MM3 math, but at least post release), so it can also be found in Dungeon Magazine on their website. It's a much longer adventure than the others I've suggested, but it has a decent introduction to the system and is the classic first mission for 4e.

The Nexus from the Siege of Bordrin's Watch, a part of the Scales of War campaign which has been published for free on the WotC website.

Scales of War isn't a particularly good campaign, in my opinion, however it does have some fun bits, and The Nexus at the end of the Siege of Bordrin's Watch is one of those.

It's good because it is relatively simple and yet has so much happening. Simply put, the players have to make their way up a spiral staircase around a central pillar, in order to escape and seal the tunnels that are allowing orcs passage through the mountain. The combat starts fairly simply, but over time more and more monsters are added, and it isn't long before the water starts to rise and the players (and monsters) are forced to make their way to the top.

Basically you've got combat with several different sorts of monsters (particularly melee, archers and spellcasters), you have opportunities for skill checks (particularly combat related ones, but not exclusively), and you have a combat where the players can't simply find the best spot and hang-tough till they win - they have to keep moving, even if it's not in their advantage to do so.

I've seen it run three or four times now, and played it myself once, and it's always been memorable and one of the few encounters that is still brought up today, years since we first played it.

If the DM is arts-and-craft enabled then it's also a great opportunity for 3D terrain.

Not the answer you're looking for? Browse other questions tagged dnd-4e game-recommendation published-adventures or ask your own question.

23
Free Basic-Rules-only adventure to showcase D&D 5e
6
What is a good way to introduce D&D 4e at a mini-con?
-1
What's a good adventure to begin a level 1 D&D 4E campaign?

12
Where is published errata for Essentials?
7
What should I look out for, when scaling a late heroic published adventure for late paragon/early epic tier?
2
How to proceed when characters want to attack the tentacles of a Kraken?