What are the probabilities of rolling doubles in a pool of d6s?

I am thinking of designing a ttrpg, and as a dice rolling system I was thinking of a system where players roll a pool of d6s. Any roll that results in multiples of the same number is a success, and is more successful the more of the number rolled. To design the system fairly, I need to know probabilities of rolling doubles.

The probabilistic generalisation of the pigeonhole principle tells us that for \$n\$ pigeons randomly assigned to \$m\$ pigeonholes with equal probability, the chance that one hole will contain at least 2 pigeons is:

For us, our pigeons are the number of dice and the holes are the numbers they can display. For 0 & 1 dice, the answer is obviously 0 - you need at least 2 dice to have a pair. For 7 or more dice it's one due to the non-generalised pigeonhole principle - 7 pigeons can't fit in 6 holes without at least 2 sharing.

Now, this is a subset of the balls into bins problem which has been extensively studied because its a fundamental resource allocation problem in computers - if we have \$n\$ requests per second directed at \$m\$ servers/routers/whatevers, how much capacity does each need to cope with the maximum expected load. Or, more commonly, for a given capacity, how many do we need. In that area, they are looking at big numbers where it's not practical (or possible) to actually do the calculations since they involve factorials and the factorial of a big number is a f&%$ing big number (which is a technical computer science term meaning bigger than we can work out).

However, for real dice at a real table, we can work it out exactly. and by "we", I mean "you" but I'll get you started.

To find the number of ways where there are at least 3 matching numbers, we first find the complement: how many ways are there where the most number of matches is 2? To do this we use a version of the balls-in-bins problem where we assign each bin a maximum capacity of 2. The number of ways we can arrange \$n\$ balls into \$k\$ bins subject to the contains that each bin can have at most \$m\$ balls is:

Your probability of at least one triple is, therefore, \$1-{N\over D}\$. Plug in the numbers from 3 to 12 and crank the handle.

You're going to have a fairly limited range where success (of some level) is possible, but isn't guaranteed.

For 1d6, it's obviously impossible to roll doubles. 7d6 guarantees at least one double by the pigeonhole principle. So only from 2d6 to 6d6 do you have any uncertainty at all. Because my conditional probability skills have atrophied, I just brute-forced the chance of success from 2d6 to 6d6 with Python:

You'll note the odds of success rise quickly; the birthday problem (or "paradox") means your odds of a repeat increase faster than a mere one-sixth for each additional die, so even within your range with a possibility of failure, three of five pools are heavily weighted towards success, and only one is heavily weighted towards failure. You'll have basically no ability to provide granular, predictably increasing levels of difficulty.

As it happens, the generalized birthday problem (for a "year" with six "days", looking for two or more "people" having the same birthday) describes your exact situation, so if you want to look for a general solution, that's the mathematical tool you'd use to solve for arbitrary numbers of dice (it's adaptable to different die sizes too), with arbitrary degrees of success (doubles, triples, etc.).

For triples, you have the same obvious end points (impossible below three dice, guaranteed to get a triple with 13 or more dice). Because I don't trust myself to apply the birthday problem, a generalized Python function that solves (incredibly slowly for large inputs) for arbitrary numbers of repetitions on arbitrary numbers of dice would be:

from 3 to 10 dice (stopped at 10 because exhaustive search is slow), the probabilities go:

which shows a less extreme version of the pattern looking for doubles; the probability of triples starts low (2.78% with three dice; basically, the odds that the other two dice happen to come up the same as whatever the first die rolled), but grows quickly; adding just one die makes a big change in the odds of "super success".

For a numerical answer, we can use the AnyDice code I just recently wrote for another answer, which calculates the highest number of identical values in a roll of dice:

The trick is to plot the results of this program in "at least" mode:

Ps. If you want, it's also quite easy to tweak the program to calculate these probabilities for several different dice pool sizes and to graph the results:

Stacked area plot up to 20 dice 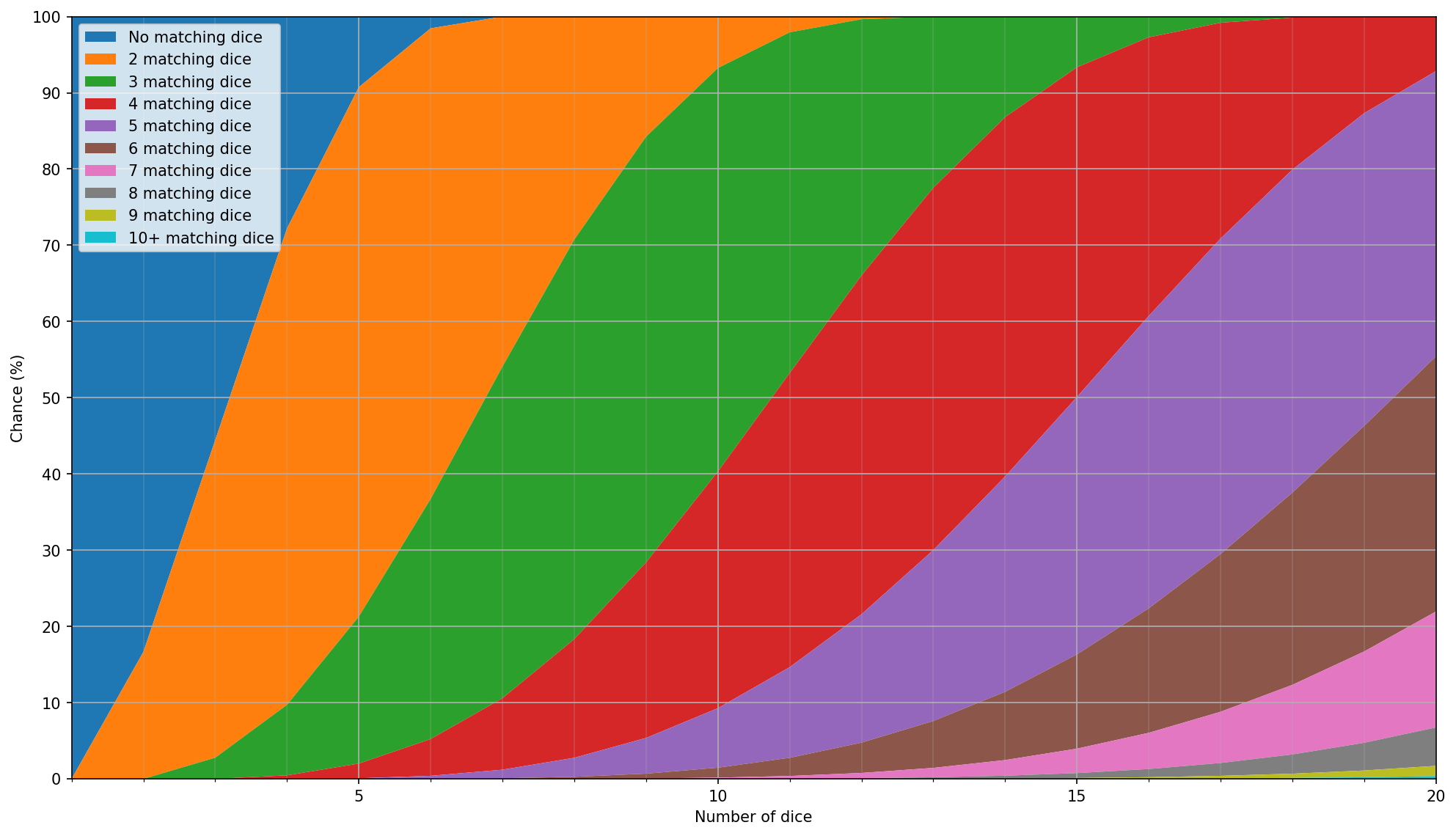 This was generated using the algorithm from my CthulhuTech answer. Though for this specific problem Dale M's balls-into-bins formulation is probably easier to understand.

Not the answer you're looking for? Browse other questions tagged statistics dice .

6
Help Calculating Dice Odds for a Unique d6 Dice Pool
10
How can I get the highest or lowest values of an irregular dice pool in AnyDice?
31
Does the chance of rolling a 1 in a pool of d10s increase as the number of dice increases?
8
Odds for dice pool with exploding dice
8
How are a dice pool's probabilities affected by being allowed/forced to add dice then drop high/low dice?
5
Is it still a binomial distribution when rolling dice with different probabilities that must be met to count a success?
2
How do I find the odds in a dice pool contest?
1
How can I calculate the probability of complete success with this mixed dice pool using AnyDice?
4
How do I model a fudge dice roll with re-rolls in Anydice?
15
A player rolls several 20-sided dice, takes the lowest value, ignores the rest. What is the probability of this value being at least 7?