Where do the symbols for the Spheres in Mage: the Ascension come from?

The Mage: the Ascension line has adopted symbols that represent each Sphere. My question is where they are from? Not in-world - I am interested what is the real world source of these. 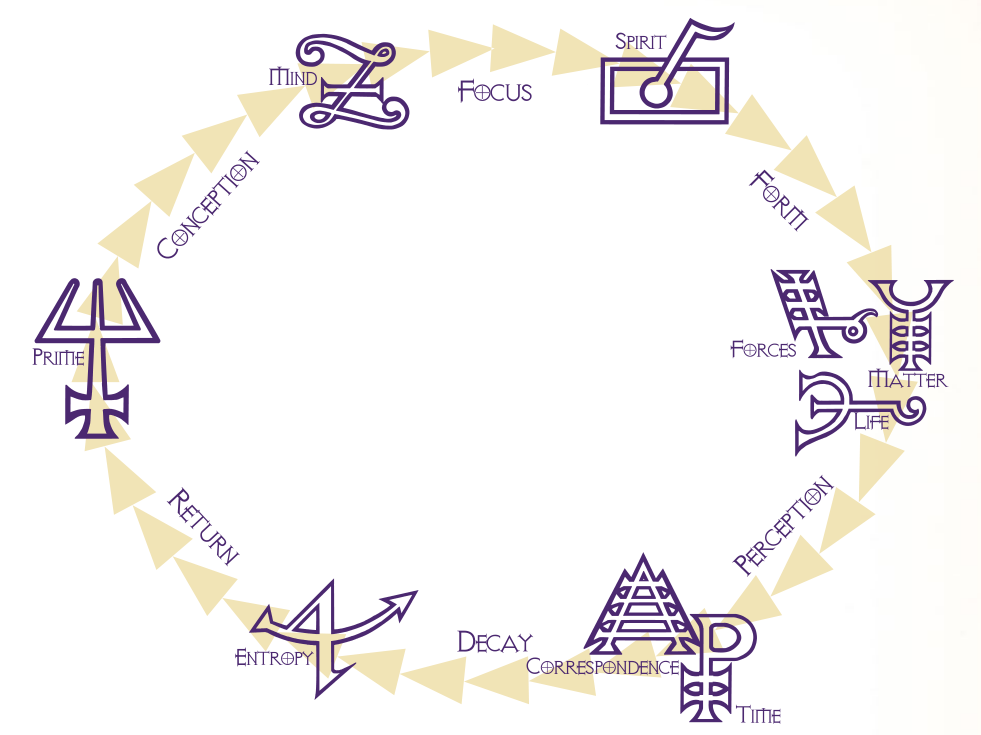 I would also want to clarify that I do not believe these were created specifically for Mage. As a game tries very hard to incorporate real world mystic concepts and practices and concepts.

I have seen some of the symbols in other places, for example the Prime symbol (perhaps an ornate Greek Psi character) shows up in some video games as a "spell particle effect" or otherwise something mystic among other thing.

As an example, the video game Arcanum: Of Steamworks and Magick Obscura features the symbol for the Fire magic college. It is not merely a Psi character - it is the same trident shape with a line through it:

The same game also features the Life symbol for the Phantasm College a Greek Psi with soft curves, rotated 90 degrees anti-clockwise and ends in a "hook":

Arcanum also has the Summoning which has the Entropy symbol - I can only describe it as an Arabic numeral "4" with a big flourish for the middle horizontal dash to make it 1. curved a bit 2. styled as an arrow pointing to the right:

I am sure I have noticed others like the Matter and Time symbols in other contexts but I cannot give examples right now. Perhaps the only one I do not remember seeing elsewhere is the Spirit symbol.

All in all, it appears that many works tap into the same source for these but I am not sure where to search for it and how.

As Guybrush McKenzie’s fine answer notes, Wikipedia claims these are alchemical symbols depicted in Symbols, Signs, and Signets by Ernst Lehrer, 1950. However, I haven’t been able to find a copy of this book to double-check that, and I don’t think anyone at Wikipedia has either: they don’t cite the book itself but rather this forum post. However, our own @JasonWodicka does have a copy, and confirms that it contains these symbols, drawn by Lehrer from his own references:

OK, I've finished the cross-referencing. All the symbols are in the book—and, in fact, all but the tenth sphere are on page 79, looking very much as they appear in Mage. (The tenth sphere is on page 78, and is labeled as the alchemical symbol for “Vinegar”) Given that these were the versions drawn by Ernst Lehner, from his varied references, I think it's very plausible that the Mage illustrators were using these exact drawings as reference, though we can’t prove it.

Wikipedia also includes a list of Latin names for the alchemical ideas that the symbols represent, citing this page’s scans of Medicinisch-Chymisch und Alchemistisches Oraculum, Ulm, 1755. This book is conveniently well into the public domain, and the Internet Archive has a full scan of it, making it easy to verify (convenient, since actual reprints of it apparently go for over $300).

Notably, no one is claiming that White Wolf actually referenced these particular sources for Mage: The Ascension. Lamed-Ah-Zohar’s forum post claims he just happened to find Symbols, Signs, and Signets in an old-book store while looking into the symbols, not that he has any knowledge that White Wolf used it. It’s completely unclear how Medicinisch-Chymisch was found. Point is, we don’t know exactly how White Wolf found these symbols—but most likely, it was a process rather similar to Lamed-Ah-Zohar’s, whoever was tasked with this went to a library or old-book store, and just used whatever happened to be available. Remember, Mage was published the same year Tim Berners-Lee released the world’s first web browser, so information was a lot harder to come by.

Anyway, here’s the full list, using Mage symbols from The Unofficial White Wolf Wiki, modified to fit on our site, next to the actual symbols from Medicinisch-Chymisch, for comparison. I’m using the levity.com scans since they’re in black and white, and are somewhat indexed. I also include a column with the Unicode characters for each concept, where available, just to show that the ones from Mage aren’t (apparently) the most prominent ones.

They are derived from alchemical symbols

Several sources, including those cited on the Wikipedia article for Mage: The Ascension, match the sphere symbols to specific alchemical symbols. Some of the sources cite version of the symbols found in the 1950 book Symbols, Signs and Signets by Ernst Lehner (though don’t claim this was the source used by White Wolf), but you can also find many of them in online collections of alchemical symbols.

The Mage versions have enough in common with these that this rings true, though they are adaptations: sometimes they use part of a more complex symbol, or change it by adding or removing elements. Only a few are relatively unchanged, and some of the listed “matches” are more like inspiration than a single source.

The list given on Wikipedia and in at least one of its sources is:

As for their use in Arcanum, that game was released in 2001, many years after the release of the first edition of Mage: The Ascension in 1993. Also of note is that Arcanum was produced by Troika Games, who went on to produce Vampire: The Masquerade - Bloodlines in 2004, which might indicate some crossover awareness of Mage. This is just speculation, though; and of note the symbols you specifically cite are some of those which most closely resemble the original alchemical symbols, especially the entropy symbol.

Not the answer you're looking for? Browse other questions tagged world-of-darkness mage-the-ascension art .