What are "Dice Roll Groups" in D&D Beyond, and why are they useful?

What are D&D Beyond's Dice Roll Groups, as referred to in this changelog post, and why are they useful?

I can figure out what "delete a group" means, but why would you want to create a group in the first place?

The traditional score generation method is 6 rolls of 4d6, dropping the lowest die from each set. I am typically okay with starting ability scores skewing a little bit higher, so I like to use a "best of" method. That is, roll the traditional way, but take your choice of 3 attempts. DDB's groups feature on the ability scores tab makes this simple. Create three groups and roll them up, and apply the group you want: 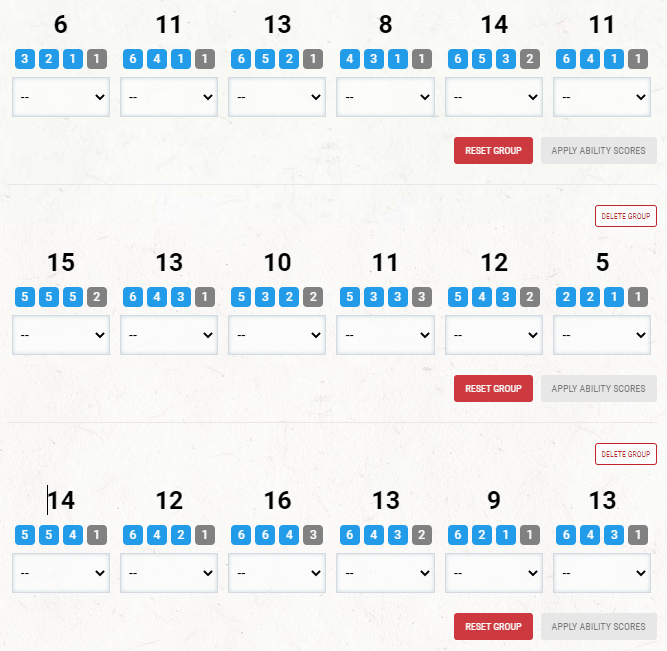 Not the answer you're looking for? Browse other questions tagged dnd-5e character-creation dnd-beyond .

2
What feats are useful for a Dragonfire Adept build?
0
Dice roll methods and their averages
23
What are turns and rounds and how long are they each?
14
Can anyone mimic a sound or speech and what do they roll?
12
Why is the Dueling fighting style adding such a big bonus to this damage roll on D&D Beyond?
15
Food Scraps, what are they and do they go bad?
10
How strong is this stat generation method? Roll 20d6, drop 2 lowest, assign groups of 3 dice for stats