Who (or what) created the atropal?

Atropal are described in the 5th Edition adventure Tomb of Annihilation:

An atropal is a ghastly, unfinished creation of an evil god, cast adrift and abandoned long ago. Since an atropal was never truly alive, it can’t be raised from the dead or resurrected by any means. Even divine intervention can’t breathe true life into this hateful, miserable horror.

An atropal is malformed and unfinished. Its wet, wrinkled, and bloated body is surmounted by a hairless, overlarge head set with glassy, vacant eyes. It constantly drools stinking ichor as it mouths obscenities. Its arms are too slender, with tiny hands ending in cruelly shaped nails. An atropal never walks but always floats, with its atrophied, dead legs hanging useless below it.

I read through the Forgotten Realms Wiki Article on atropal and did not find any further information on their creation, though there is one statement that gives some insight:

Atropals were a race of unfinished immortals modeled after the gods, stillborn godlings, who spontaneously rose as undead3 abominations.

Atropals are stillborn godlings who spontaneously rise as undead.

But this source does not appear to elucidate where these things are coming from. If I am an understanding these references correctly, an evil god is trying to create something else, screwing it up, and abandoning the result in an unfinished state to drift upon the Negative Energy Plane, until it spontaneously awakens as an undead titan. Does any source tell us which evil god is responsible?

The implication of the 5e statement is, yes, that an evil god is trying to create something, and gets busy/bored/whatever and doesn’t finish, and somehow an atropal happens. As walen’s fine answer shows,¹ Lost City of Mezro suggests that the specific atropal found in Tomb of Annihilation might be “the Forsaken One,” a “godling born of a profane coupling [of] divine powers,” which doesn’t really seem “incomplete” to me, per se, nor does it really match the sense of “creation” in the implied sense. But then, the suggestion reads to me more like “hey this is a neat tie-in you could do in your game” than it seems like “here’s the canonical origin of that atropal.”

Anyway, prior to 5e, however, there was no implication that this was an abandoned creation. 3e’s Epic Level Handbook states only that they were “stillborn,” so again, not so much “creation” so much as “procreation.” And it need not have been the procreation of an evil god—any god who suffers the misfortune of a late miscarriage is at risk of a significant compounding trauma in the form of an atropal. (The only other mentions of the atropal in 3e that I can find are the 3.5e update pamphlet for Epic Level Handbook, and the atropal scion in Libris Mortis which mentions that the scion’s origin is from a bit of flesh from a destroyed atropal, but says nothing new about the atropal’s origins.)

In 4e, they avoid mentioning stillbirth, saying only that they are “unfinished godlings,” but “godlings” are generally created through reproduction so this to me sounds like a euphemism—there isn’t really any other way to have one that’s incomplete. This still doesn’t quite seem to match the story in Lost City of Mezro where the godling was successfully “born,” in my opinion.

It seems likely to me that the explanation here is just that they’re moving away from the specific, squicky, and potentially triggering, origin of atropals, towards something vague and vaguely compatible. That is, anyone familiar with and interested in using the 3e origin isn’t necessarily told not to by the 5e description (after all, as in 4e, “unfinished” could still be referring to the unsuccessful birth that would have “finished” it), though the mention of an “evil god” kind of throws a wrench in things a bit. But more importantly, anyone unfamiliar with, or uncomfortable with, the 3e origin doesn’t have it thrown in their face now.

Ultimately, though, that’s speculation. The atropal is not a “big,” popular monster with a lot written about it. It’s only really been discussed in any detail—and even then, not much of it—in three publications (3e Epic Level Handbook, 4e Monster Manual, 5e Tomb of Annihilation).² I cannot entirely rule out that it was discussed in some issue of Dragon or Dungeon magazine—this kind of thing would be in their wheelhouse, though again the atropal would be a pretty deep cut—but I’m pretty confident that you won’t find anything else officially discussing the monster.

From page 93 of Adventurers League - Lost City of Mezro:

Most recently, the mudmaw prophesized the return of the Forsaken One: a godling born of a profane coupling between the divine powers Leira and Savras. [...] If you're playing Tomb of Annihilation, this godling could be the atropal that Acererak is rearing in the Tomb of the Nine Gods. 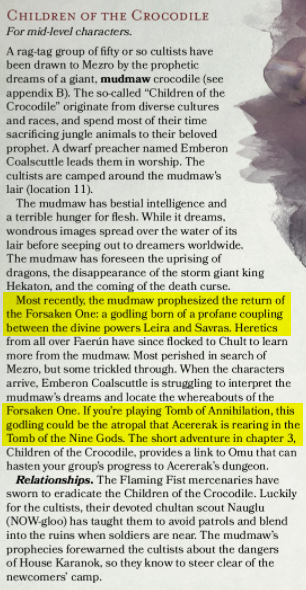 I hope this is enough of an answer for the original question:

Does any source tell us which evil god is responsible?

The full story about Leira and Savras and the atropal's origin is told in an online video (the same one that Cezaryx posted that I carefully transcribe here.) I don't know whether the details are taken from some other supplement (Ruins of Mezro?) or they are OC from the author of the video, but I'll leave the transcription here anyway for reference. It starts at ~8:17:

Leira, the goddess of illusion, tricked the god Savras making him believe that there was a prophecy portenting his death. This forced the god Savras to explore the Multiverse to search for information regarding his doom. The goddess Leira made it up so that she could then sneak into the celestial palace of Savras and steal his powerful Orb of Prophecy.

Now, eventually, Savras figured it out and started concocting a plan of revenge: Savras had the god Mask —the god of shadows— help him infiltrate Leira's domains so that he could then steal back his Orb of Prophecy. Now Mask hid Savras in a different form, so that the goddess Leira wouldn't recognize him and, as such, he infiltrated her domain. And things took a turn, however, when both Leira and the disguised Savras fell in love with one another. They laid with each other and then Leira got pregnant.

The stories say that the heart of Savras grew heavy by the deception and, as such, he confessed to Leira that he was Savras all along, and that his plan was to take the Orb. Furious and heartbroken, Leira tore the unborn child from her womb, and cast it adrift into a starlit pool; then she forever turned her back on Savras. In despair, Savras smashed his Orb and swore never to deceive again.

This story is called The Heresy of the Forsaken One and it is considered heresy for both followers of Savras and Leira, for they reject the story. The heretics who claim this story to be true, say that the stillborn child thrown into the pool, yet lives, and will one day rise to seize his parents' place in the Heavens. Well: the prophetic mudmaw has foretold that the Forsaken One, the stillborn baby from Savras and Leira, is indeed the atropal that Acererak is attempting to revive.

Not the answer you're looking for? Browse other questions tagged monsters dungeons-and-dragons lore religions-and-deities .

3
Can a creature react to being targeted by a missile attack from a non-Hidden foe?

10
What are the funerary rites of Gnoll worshipers of Erythnul?
9
Who, how and when created the combo Disciplines?
11
What demons are under the dominion of Baphomet?
9
Who would be the closest to a god of wine in the Forgotten Realms?
15
Who is the god Ao?
7
What demons are related to the demon lord Dagon?
7
What demons are related to the demon lords Juiblex and Zuggtmoy?
3
What happens to clones of a deepspawn created if/when the deepspawn dies?
10
Who is the High God?
7
What controversial things has Oghma done that might test the faith of a cleric who worships him?