What counts as full cover for a seeking arrow?

The the Seeking Arrow Arcane Shot option of the Arcane Archer says:

[...] When you use this option, you don’t make an attack roll for the attack. Instead, choose one creature you have seen in the past minute. [...]
[...] The arrow flies toward that creature, moving around corners if necessary and ignoring three-quarters cover and half cover. [...]

And the rules on cover state:

A target with total cover can't be targeted directly by an attack or a spell, although some spells can reach such a target by including it in an area of effect. A target has total cover if it is completely concealed by an obstacle.

So does a target completely out of sight (e.g. they've walked around the corner) have total cover from you, and thus isn't a viable target? On one hand you don't have 'a clear path to the target' on the other the seeking arrow is 'moving around corners', and also you don't technically target the creature, but you 'choose' them. If the shot option completely ignored cover it would probably say something like Sacred Flame does (which is 'The target gains no benefit from cover for this saving throw.') instead of 'ignoring three-quarters cover and half cover'.

The way it's phrased, implies to me that despite going around the corners of something granting total cover, the shot fails? That doesn't seem right to me though.

It only counts as total cover if there is no unobstructed path for the arrow to move through.

First, I want to establish that measuring the level of cover with respect to the Archer can't be the correct interpretation, and this should be easy to see. The abundantly obvious interpretation of "moving around corners" is this scenario (blue archer, red target): 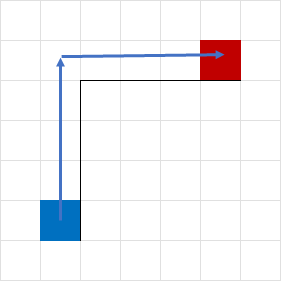 Then, the only other interpretation that makes sense is that we measure cover with respect to the arrow as it moves, where it only counts as total cover if there is no unobstructed path for the arrow to move through. This means that the target must be completely enclosed in something to have total cover — any unobstructed path to the target is just another corner for the arrow to move around.

This is consistent with what we know about three-quarters cover:

A target has three-quarters cover if about three-quarters of it is covered by an obstacle. The obstacle might be a portcullis, an arrow slit, or a thick tree trunk.

Even an arrow slit is three-quarters cover, which the arrow will ignore. And finally, this is exactly what is explained in the Seeking Arrow description:

If the target is within the weapon’s range and there is a path large enough for the arrow to travel to the target, the target must make a Dexterity saving throw.

Instead, Seeking Arrow provides its own rule about whether the target can be hit:

If the target is within the weapon’s range and there is a path large enough for the arrow to travel to the target, the target must make a Dexterity saving throw.

So as long as there’s an arrow-navigable hole that leads to the target, they can be hit. This includes cases that would normally be full cover for conventional arrows — someone inside a vertical iron coffin with a two centimeter air hole drilled in the top would have total cover, but a Seeking Arrow will find its way in just fine.

The same cover that would block a giant Fireball spell

Some spells, such as Fireball, have an area of effect that spreads around corners, which means even if there is total cover between you and the point of origin, you can still get hit as long as there's a valid path around the obstacle granting you cover. Seeking Arrow actually works in almost exactly the same way, except that it only affects a single target instead of an area. Instead of spreading around corners, it seeks around corners. So, if the rules for the area of effect of Fireball make sense to you, use the following heuristic to determine how Seeking Arrow works: if a Fireball with a sufficiently large explosive radius could spread around corners to reach a target, then a Seeking Arrow with sufficient range can also seek around those same corners to hit that target.

(Note that I am ignoring the issue of what constitutes "sufficient range", since that would be a separate question.)

Not the answer you're looking for? Browse other questions tagged dnd-5e class-feature targeting cover arcane-archer .

26
Can sacred flame target someone that is behind total cover?
4
Does cover help against spells/effects that spread around corners (like fireball)?

6
How does the Oathbow's benefit to ranged attacks interact with the Arcane Archer fighter's Arcane Shot options Piercing/Seeking Arrow?
7
How much cover does Wall of Stone give against a dragon's breath weapon if arrow slits are included in the wall?
9
What constitutes the most protective degree of cover?
11
Is 'cover' simply about being out of sight? What IS cover?
4
How to resolve multiple sources of cover when using a grid?
8
What counts as damage by an ammunition when using Arcane Shot in regards to poison?
8
Does Lightning Arrow work with an Arcane Archer's 'Piercing Arrow'?
7
If my next attack roll is subject to a condition like 'disadvantage' can I avoid that by deciding to use an arcane shot after the attack roll?
13
Does seeking arrow travel its weapon's long or short range before disappearing?
13
Does an Arcane Archer fighter's Piercing or Seeking Arrow pass through a Wind Wall spell?