Is this imbalanced for character generation? Roll 20d6, drop 2 lowest, assign groups of 3 dice for stats.

Context: We have tried multiple character generation methods in our group and I have come up with a system (emphasis not on me inventing, might have read somewhere).

I am okay at math, but not self confident enough to get into calculating how over- or underpowered it might be.

Question: Compared to roll 4 drop lowest (as the most "overpowered") how strong is this? Roll 20d6, drop 2 lowest (VERY likely two 1s), organize the rest for group of 6*3.

I didn't want to go into details about how we use it in general, but I now feel the need to clarify something as we love high main stats but try to play weaknesses fairly. If anybody whips out a character with a stat:

Nothing really mechanically fleshed out, but sacrifices were made for becoming "superhuman" so there are consequences.

While working on this, I realized I could can get most distribution I would like to have as a player. Which makes your method pretty close to a point-buy with a random budget. You can read further to see a comparison with 4d6.

Two aspects bring this method closer to a Point Buy. First, I can choose what the shape of the array will look like. Second, I can switch dices around to get better bonus. (For example, turning a 15 to a 14 in order to raise a 7 into a 8. Raising one of the lower bonus at no cost to the higher bonuses)

Compared to the official Point Buy, your system allows for higher stats, allow for lower stats (due to lack of limits) and makes it easier to get higher numbers (due to lack of scaling). With the caveat that low stats are actually hard to get because you need low dice for them.

I can compare with the example given in the rules here and try to replicate those arrays in Anydice.

The first example array is a 3-high/3-low that makes [15-15-15-8-8-8]. By adjusting the distribution like this, I get a similar and possibly better array. The low are similar, with a 50% chance of being 8 or better, and probably a 6-7 otherwise. While one of the high are have the same probability of being a 16 or higher.

So, compared to standard Point Buy, the method is worse if you try to have an average array. But better as you try to have extreme stats. On top of allowing stats above 15 which are forbidden with point-buy. I would describe it as "not balanced with point-buy, but similar in power" : the important stats are expected to be a few modifier highers and the dumpstats to be significantly lower, but not that out of the norm.

You do not give any ways that you think your players will use your method, so I'll use the way I would do it.

First I try to get my 3 main stats as high as I can. On most characters, this would be my attack stat, then Dex or Con depending on what kind of character I'm playing. Then the rest is divided as evenly to get as few glaring weakness since I do not expect to actually use those stats, I just don't want a glaring -3 on a skill or a save if I can avoid it. Lastly, my race will probably give me a bonus to my first and either my second or third highest stats.

Here is what I get with this strategy Anydice. The lines are the chances of getting at least X.

Notice how the two main stats are very likely to be at least 17 and 15 before taking into account races. With the third stat around 12-13.

Also notice how the last three stats tend to be close to one another. Similar to the standard array and 4d6 methods.

On a personnal note, I would never take an ASI over a feat with those numbers.

For reference, here is the probability curve for 4d6-drop-lowest and 3d6 (Taken from an article on Anydice). I will be basing the following on this curves as well as my personal experience with rolling a complete array with 4d6. 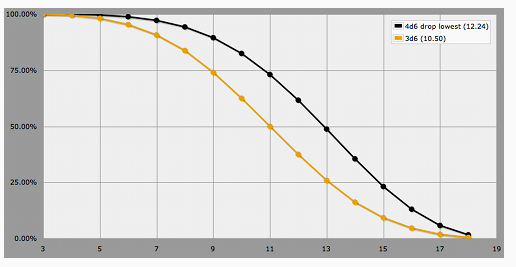 Compared to this, your method gives:

I don't think this will be that gamebreaking. But I would feel like my character is a full power from Lvl1. As mentionned, I wouldn't take more than 1 ASI until my build is complete from a feat point of view.

While the 4d6 bell-curve ensures most character have a bonus around +1 in all stats and a main stat around +3 for their specialty, you method gives higher highs and lower lows. More precisely, the highs appear to be slightly better than 4d6 (by +1 usually) while the lows are significantly worse ( by probably -2).

All in all, this method appears less gamebreaking than it does at first sight. It actually looks fun for a high-power game. You will absolutely need feats to make those Lvl4-8-12 interesting. Especially for a fighter.

If you believe that for a given character the six scores are each worth a constant amount per point, then the optimal strategy is to allocate your top three dice to the most important score, the next three highest to the second-most important, and so forth.

Here's what happens if you do this:

The six curves represent the chance of rolling at least X on your highest score, second highest score, etc. Note that the joint distribution of the six scores is not independent.

Finding the probability distribution of the total point-buy equivalent value is computationally feasible using the right algorithm, but I don't have one ready-to-go for this specific case.

It is fairly hard to statistically analyze your system because there's a lot of human decision making involved. Depending on how your players choose to assign the 18 dice they have for their stats, you may find you have different balance issues. But there are a few things that are clear:

First, a characters' total stats will be a bit worse on average. As this AnyDice program shows, the total of all the character's attribute scores will average about 6 points less than with the standard rolling method. That's not huge, but it's not trivial either. 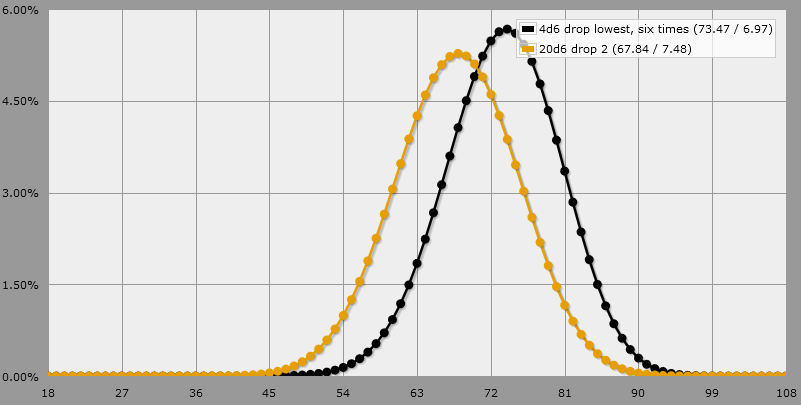 The other significant difference is how easy your system will make it for the player to get exceptionally high or low scores for certain attributes. It is very rare for a PC to start with an 18 or a 3 in a stat, but in your system is will be very easy for a player to choose a combination of dice that give them stats like that. Almost every roll will give at least 3 sixes for the player to use for their best stat, if they want to. And while ones are a bit rarer (since the lowest two dice are dropped), there are still going to be a lot of low dice that will often go into "dump" stats that the player hopes never to roll.

Here's another graph showing the highest and lowest possible rolls from each system (generated by this AnyDice program). 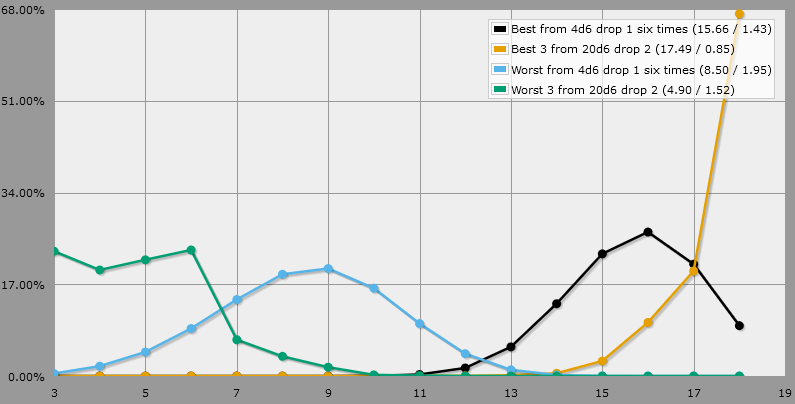 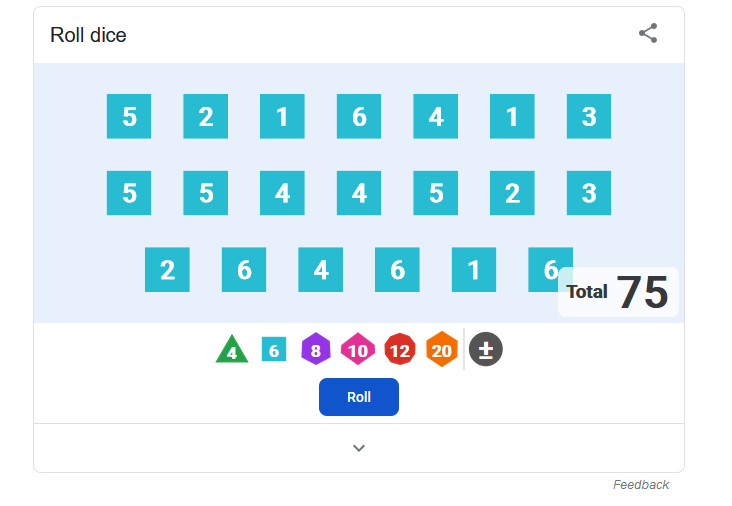 Okay, so as one of your players i've just rolled my stat generation dice.

This method allows me to minmax whichever scores I desire most above others, resulting in very focused characters with lower-than-usual 'dump' scores. If you like 3 cha fighters and 5 str wizards, this may be ideal for you.

Overall I would rate it lower than most other methods, including the simpler 'roll 4d6 drop 1'.

However, you allow the 18 remaining dice to be grouped however the player wants which can be rather powerful. This is hard to visualize in a single graph so to illustrate let's look at the probabilities when grouping the highest 3 dice together, which will be the highest one of the player's stats can be and in practice what most players will likely do for their class' primary stat.

There is a ~67% chance a player will have the option to have a score of 18 in their primary stat (before class bonuses), compared to the mere ~2% when using "4d6 drop lowest".

Overall it kind of depends on preference and perhaps even the chosen class. Players who prefer a min-max approach would probably greatly favor your method, but players who prefer a more balanced stat distribution might not. Equally, classes that can really benefit from one high stat (like Rogues) will likely prefer your method more than classes that generally try to increase three stats (like Paladins).

Not the answer you're looking for? Browse other questions tagged dnd-5e character-creation house-rules statistics .

20
What are the odds of rolling specific ability score totals in D&D?

18
Characters Created via dice rolls: Do I have a problem with vastly differing characters?
36
The group I DM for insists on rolled stats, but I don't want unbalanced PCs to cause group conflicts later
5
How can I calculate the distribution of "roll 4d6, keep rerolling 1s and 2s, and drop the lowest die" in AnyDice?
11
How can I model this "Party Draft Pool" ability score generation method in AnyDice?
6
What is the average point buy of a stat array from a 6x6 matrix of "roll 4d6, drop the lowest die"?
4
How can I model the probabilities for this mechanic involving cancelling out dice pools in AnyDice?
1
How can I model the probabilities for highest and lowest of opposing dice pools?
2
How can I write a formula for this houseruled roll in AnyDice?
4
What are the effects of using this stat generation method?