How do I get the sum of highest rolled dice normalized for dice count?

I built off of this answer, modifying to calculate the sum of the instances of the highest number (well, the product of its count with its value, same thing) then divide by the amount of dice - getting, as a result, the 'average contribution of each die', or so I think. Looking at the graph view of the summary tab at the mean's curve should provide this answer for me.

This is the result:

It doesn't look as I expected (I expected the first die to contribute more than the second, but further dice to start contributing more as they raise the chances of both a higher result and a higher count of it).

Which brings me to the question: was my expectation off-base, or does what I coded not do what I thought it would do?

Results up to 40 dice 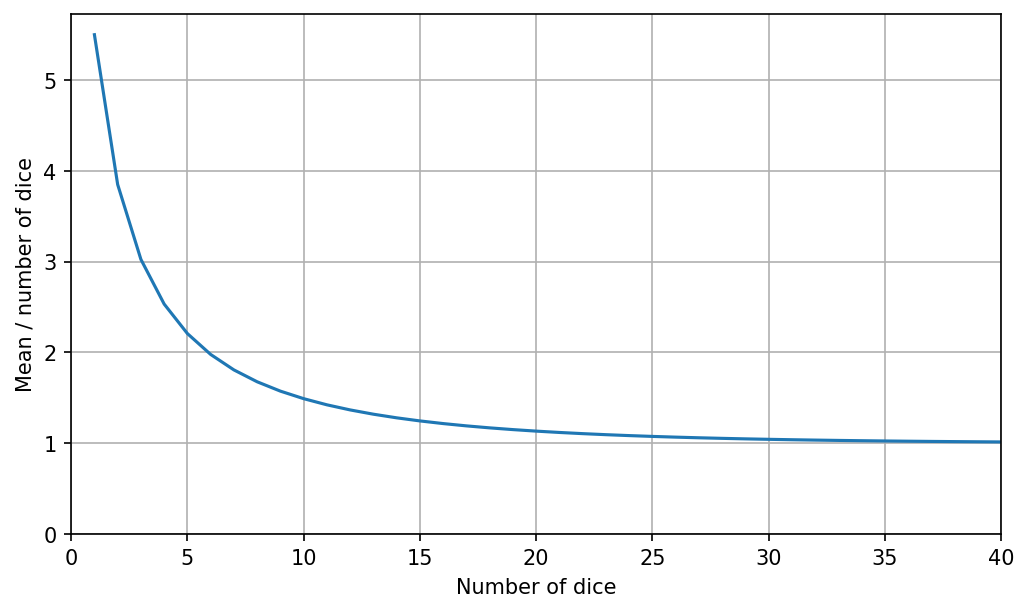 I generated these results using my hdroller Python library. Computation time on my PC was under 0.2 seconds. The two key ideas for efficient yet flexible dice pool evaluation are:

In fact, Ilmari Karonen has mentioned both iterating over outcomes and memoization in the past, but I would venture to say that the full potential of these two ideas--especially combined--is greater than any of us imagined at first.

Here is a WIP explanation of the algorithm.

Marginal contribution to the mean sum

Here is each die's marginal contribution to the mean sum: 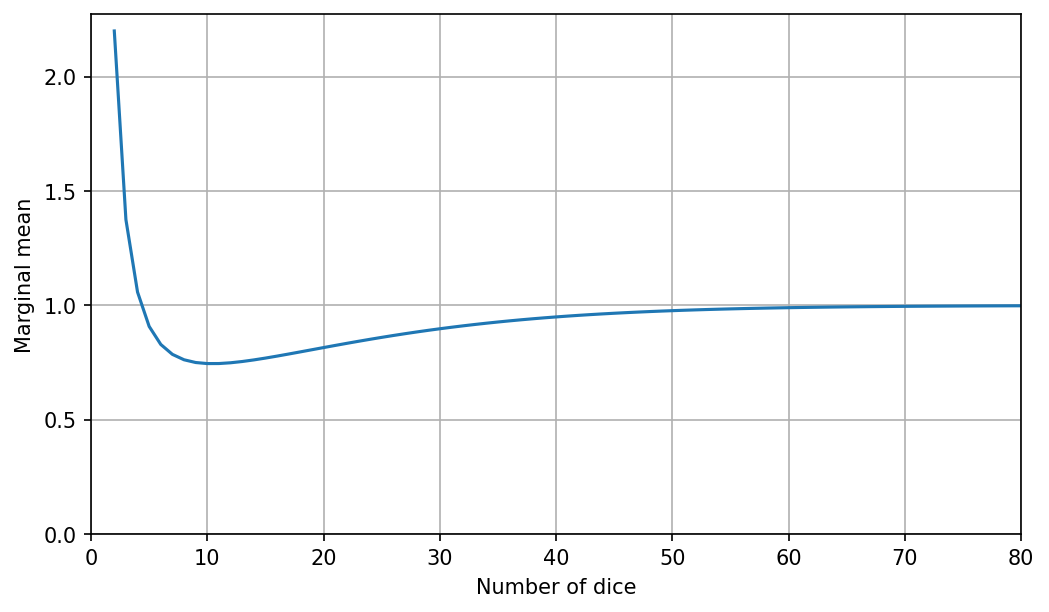 so Ilmari Karonen's conjecture about the behavior above 10 dice is exactly correct. For this plot, I doubled the maximum number of dice in order to emphasize the asymptotic behavior.

Source code (specific to this problem)

I'm still refining the API so this is subject to change, but it should at least show the general idea.

Try it in your browser using a Starboard notebook.

One obvious problem I see with your attempt is rounding errors. AnyDice uses integer math, and rounds the result of division towards zero*, so for example 9 / 5 in AnyDice equals 1, not 1.8 (which is not a number AnyDice can represent).

You can partly work around this issue by multiplying your numbers by some suitably large constant factor (say, 10 or 100 or 1000) before dividing them by N. Also, to make AnyDice round the result of division to nearest integer, instead of always down, you can replace A / B with (2*A + B) / (2*B).

(To be precise, because AnyDice rounds towards zero instead of always down, that formula only works for positive results. If either the dividend or the divisor may be negative, you'll need something slightly more complicated, as shown below. Also, there still an ambiguous case when the divisor is even and the remainder is exactly half of the divisor; my code below rounds away from zero in those cases, but other choices are also possible and justifiable.)

If you only care about the average results, or about the general shape of the distributions instead of their exact value, there's another possible workaround that makes use of AnyDice's ability to work with probability distributions: rounding with dithering. Basically, the idea is to replace A / B with a function that rounds the result of the division up with probability p = R / B, where R is the remainder left after dividing A by B, and down with probability 1 − p, e.g. like this:

Using this kind of dithering division will yield exactly correct averages with no rounding error** even without any multiply-by-1000 scaling tricks. However, the distributions of the actual rolled results will look "blurred", since e.g. the probability of rolling 7 / 2 = 3.5 will be spread evenly over the "3" and "4" bins in the chart. (The standard deviations in the summary view will also be off a bit, since the dithering introduces extra randomness and thus increases the variance of the results.)

*) The AnyDice documentation says "down" instead of "towards zero", but that appears to be an error in the documentation. The actual behavior is easy enough to verify.

**) Well, except for the very slight errors possibly resulting from the finite precision floating point math used by AnyDice to calculate probabilities.

I expected the first die to contribute more than the second, but further dice to start contributing more as they raise the chances of both a higher result and a higher count of it.

Looking at the results from the programs above, it seems that — even with corrected rounding — your intuition is indeed off: at least for the pool sizes AnyDice can handle, the more dice there already are in the pool, the less relative value a single extra die has.

One way of perhaps refining your intuition is to consider the limit of very large pools, where you're almost guaranteed to roll at least one 10 on nd10. Thus, your result is almost always 10 × k, where k is the number of your dice that rolled a 10.

Of course, for smaller pools, there's also a non-negligible change of rolling no tens at all, and thus adding more dice raises the probability of rolling a higher max value. The effects of this are more complicated to calculate, since raising the value of the highest roll is not always beneficial: a roll of (1, 5, 7, 7) → 14 is better than a roll of (1, 5, 7, 7, 10) → 10.

Based on experimenting with your code (specifically, removing the division entirely and varying the size of the pool and the number of sides on the dice) it seems that as the pool size increases starting from one die, there are (at least for large enough dice) three qualitatively different phases:

I get a different result when I try to reproduce your described calculation using dyce¹:

I've attached the anydyce² graphs below. You can see my attempt (and play around with it) in your browser:

That configuration of JupyterLite uses in-memory browser storage, so download any work you want to save.

There's a reasonable possibility the difference could be explained by:

That being said, my results look similar to @Ilmari Karonen's scaled up result from his answer. There are more efficient (and less readable) ways for dyce to arrive at those results, but you should be able to drive that implementation up to 10d10 (and possibly beyond) without too much of an issue. If you want to go higher, I can explore alternatives.

² anydyce is my visualization layer for dyce meant as a rough stand-in for AnyDice.

It gives you how many dice match the highest die in the pool (irrespective of what that is).

10
How to calculate the probabilities for eliminative dice pools (dice cancelling mechanic) in Neon City Overdrive?
9
Roll and Keep in Anydice
2
How to count the highest number of matching results?

7
How do I find the highest number rolled in a pool if dice, and the number of times it is rolled using AnyDice?
2
Help with AnyDice Script for a d6 Dice Pool
8
How are a dice pool's probabilities affected by being allowed/forced to add dice then drop high/low dice?
10
How can I calculate the sum of 2 random dice out of a 3d6 pool in AnyDice?
1
How can I model the probabilities for highest and lowest of opposing dice pools?
10
How to calculate the probabilities for eliminative dice pools (dice cancelling mechanic) in Neon City Overdrive?
4
How do I graph the chance of success with a range of dice pools against a range of target numbers?
4
Modeling a system where you roll Xd20 and take highest, plus the second highest if the first one is a critical, etc
6
How can I calculate expected Stunt Points per attack when FIRST dropping a d6?
4
Anydice: Neon City Overdrive type eliminative dice pool BUT danger dice cancel equal to AND less than