Background: I'm introducing masterwork items for 5e as a homebrew rule, both to help players spend surplus gold on something useful when they cannot buy magic items, and to make shopping a bit more interesting -- e.g. when you buy a horse, do you want to spend extra for a well-bred horse that is a bit faster, or economize and get a nag that is slower?

For weapons, I have the option to make the masterwork items deal +1 extra damage, or add +1 to hit. I am currently going with the extra damage, to avoid any risks with bounded accuracy. I suspect that for the levels where such items are making a difference, the extra damage might actually be stronger, and I want the effect to be as small as possible.

Players will get access to magic as in typical D&D adventures, so by the mid-levels they likely will have magic weapons and this will matter less. They also can use feats. I'm most interested in the effect on level 1-10 characters, if that makes a difference or makes the answer easier.

For the campaign world (a rather generic D&D world like Forgotten Realms) assume that for the first 10 levels:

If you have a high base damage (that is, your damage total before adding a +1 for the weapon), then the to-hit is much more valuable, because you're depending on actually connecting to get that big ball of base damage, and the +1 is a proportionally smaller part of that damage total. (Taking it to the extreme can be useful for illustration: If you hit for 30 damage, adding 1 to that is nothing, while possibly converting no damage into 30 damage is a big deal!)

At low level, the differences are minimal, but grow as characters gain class features that add to their damage, such as sneak attack, smites, rage, and so on.

Or to put that another way, rogues and greatweapon users are going to want a +1 to hit at all levels, and +1 to hit remains useful across your career. A +1 damage favors characters who use smaller weapons, such as two-weapon specialists, and tends to fade over time as the base damage per hit goes up.

I would suggest having masterwork weapons just be +1 damage. In my opinion, +1 to hit will make magic +1 weapons feel much less special in a way that the damage bonus won't.

As explained in greater detail below, +1 to hit is better than +1 to damage when the following inequality is true:

So the answer depends on the character's accuracy and damage, and the range of armor classes they expect to encounter. I chose this particular arrangement for the inequality because it provides a way to compare multiple character variables to a single campaign variable; it keeps my stats on one side and the stats of what I expect to be fighting on the other. For example, if you have +7 to hit (\$H=7\$), and deal 1d8+4 (\$D=8.5\$) damage on a hit, then we have:

With these stats, +1 to hit will be better than +1 to damage when the target armor class is 20 or more. For \$AC\leq 19\$, +1 to damage has a higher average damage. Darth Pseudonym's answer outlines some of the general intuition behind the results of this derivation. Finally, here is a table showing the "Armor Class where +1 Hit is better than +1 Damage", with hit bonus ranging from +0 to +13, and base damage ranging from 1d4+0 to 2d6+5:

And if colors are your thing for visualization, here is the same table, with +1 to hit more favorable the redder it is: 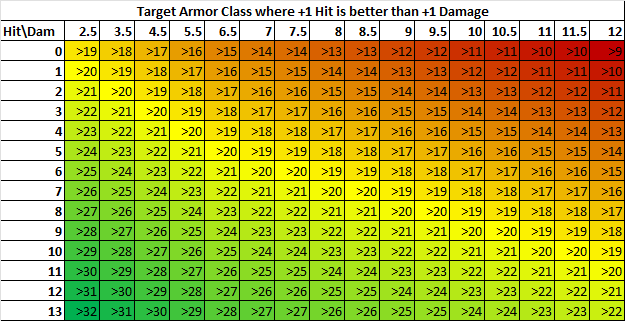 To use this table to make a decision, find the cell corresponding to your stats, and decide if the given armor class range contains ACs you expect to encounter. For example, if you are a greatsword wielder with 20 strength at 9th level, then you have \$H=9\$ and \$D=12\$, then you would expect +1 to Hit to outperform +1 damage for armor classes of 19 or more. If you expect most of the enemies you encounter to have ACs of 18 or less, choose +1 damage; or if you want to the better option for ACs of 19 or more, choose +1 to hit.

Thankfully, we do not have to account for crits because the expected extra damage from a crit is the same in either case and will cancel out. The formula for expected damage of one attack (without accounting for crit) is:

Thus, to figure out which bonus is better, we just need to compare this formula in each situation. We will find the case where +1 to hit is better than +1 to damage, then you need only flip the inequality to find the other situation:

With some algebra, we obtain:

When this inequality is true, a +1 bonus to hit will, on average, deal more damage than a +1 bonus to damage. To actually make a decision, just fix \$H\$ and \$D\$ to see the range of ACs where one is better.

Finally, I have discovered a truly remarkable proof for what happens when you have advantage which the margins of this answer are too small to contain.

The bonus to damage is more beneficial when the probability to hit is greater than the expected damage -1 divided by 20.

It then depends on the character, the average damage and on the average probability to hit. Consider a 1st level fighter with a longsword, as an example: the expected value for their damage is 7.5 (1d8+3, assuming an optimal strength of 16), then a +1 bonus on damage is convenient if they hit with a probability greater than 32.5%. Since the average hitting probability is 65%, such bonus is more convenient rather than a bonus to hit.

There is always a chance to miss.

Suppose that a fighter (5th level, STR 18) has a bonus to hit equal to +7, they are under the effect of Bless and they are fighting a group of Ogre Zombie. The probability to hit is 95% and not 100% since a natural 1 is always a miss.

The Mathematical explanation is reported below, for the interested readers.

The expected value \$\text{E}[D]\$ for the damage is given by the sum of two terms:

In General, +1 to hit is more valuable than +1 to damage.

At most levels of AC present in the game by monster weight (number of monsters with) and common npc choices, factoring in to some degree the more 'popular' types of enemies, and the class abilities and expected ability scores of most characters using the common generation rules at the typical levels of play (1-3 and 3-11, with most time spent at 3-7).

The degree to which it is more valuable (in terms of Average Damage Output) depends heavily on whether Feats are in the game, and to what degree players have managed to optimize their characters to gain regular Advantage. In general, at higher levels of optimization (which is quite common in 5e - the simple nature of the game means that optimizations for character success are well known and publicized) the +hit will be worth more in terms of overall damage output, as attacks will do more damage and/or take advantage of Great Weapon Master/Sharpshooter to directly transfer to-hit into damage, but overall the value of the +hit greater than +1 damage in most (nearly all) cases.

At first level, or with very unoptimized parties, the reverse can be true, but is not guaranteed to be.

Therefore we can fairly safely say that if you want to make degrees of quality with weapons, adding +damage will be a safer/weaker bonus than adding +hit. I would say you could add up to +3 damage at most tables with it still being weaker than +1 to hit, although again, that will change depending on level of optimization etc.

This answer uses the formula from EddyMages answer to put it into context of expected encounters across character levels. For this, several assumptions need to be made, that neither EddyMage nor ThomasMarkov wanted to make. While I fully understand their reasons (the purely mathematical result for a given AC and to hit encountered cannot be disputed), for me to answer my question and decide, which of the two on average during adventuring would be stronger on what levels, a way to resolve a specific encoutner is not sufficient. So I provide this answer to try and address the more difficult, less exact and to me more practical problem.

Here are the assumptions made in this answer:

With these assumptions, here is the chart for each level: 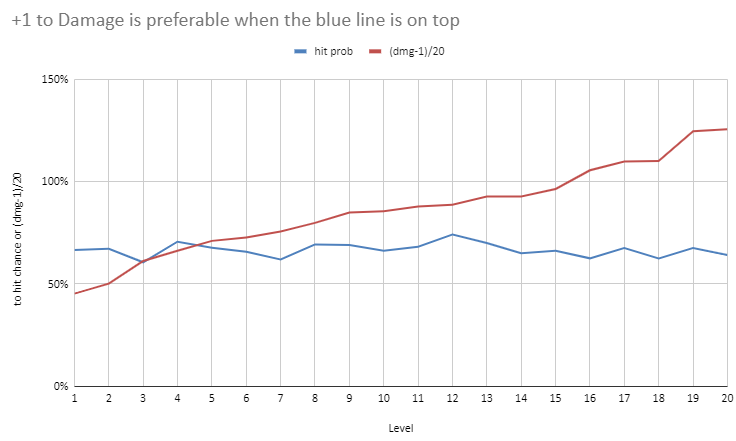 So, in tier one, the +1 to damage on average is preferable, but it will become increasingly worse afterwards, as the damage per hit for the characters keeps improving, while the to-hit chance is stuck in the hedonic treadmill of increasing to hit vs similarly increasing monster AC. 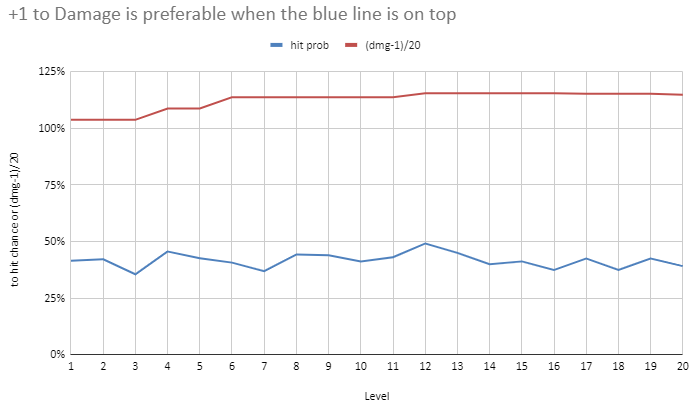 For Sharpshooter or Great Weapon Master builds, the +1 to damage is never better. Because the feat outputs such a much higher damage baseline on a hit, at a 2:1 tradeoff vs to hit, it is always preferable to get +1 to hit, at any level, and by a wide margin.

Not the answer you're looking for? Browse other questions tagged dnd-5e weapons optimization homebrew statistics .

10
Average AC of monsters per CR?
19
Is there an accepted likelihood of hitting that is consistent across tiers, and how has it been determined?
9
How many rounds does the average combat encounter last?
4
Is there any estimate of average damage output per turn for PCs by level?
4
Would a limited Gunner Feat be a balanced addition to list of Fighter's Fighting Style options?

2
Which items can I use to boost my hit chance?
14
How can I compare the damage gain between Bless and Faerie Fire?
5
How effective in combat regarding damage output could a Dexterity-based Barbarian be?
1
How much damage can a level 8 ranger deal in a typical combat encounter?
4
What is the highest average damage that a level 10 character can deal in response to being hit or damaged?
1
Does a hit with a projectile from a ranged weapon count as being "hit with a weapon"?
8
What class has the most damage output per round at level 6?
16
'Advantage' or 'Disadvantage' on damage rolls
6
Which magic weapon deals the most damage?