How do you simulate dependent dice rolls in anydice?

I'm attempting to find the damage distribution (given a target with stats) of a series of two 5e attacks, mind sliver and then two melf's minute meteors. But it seems I'm having trouble modeling dice rolls that have other dice rolls that they are dependent on. For instance:

At the very end, I need to use a slightly different "hit chance" if mind sliver "hit" the target before the first meteor. The only way I could imagine this working is if it branched on success or fail of the first roll, or mapped different outcomes (0 or 1) to different dice roll values. But it seems anydice is unable to do this. Although I might be missing some contrived solution that technically makes this possible.

The above code results in this error:

So it seems like the function conditional code doesn't simulate dice rolls and retabulate in the way I was expecting. Though this type of calculation would seem to fit right in with anydice, I just can't seem to figure out how to implement it with the language.

It's hard to know exactly how things are implemented under the hood, but it seems like maybe this would work as a language extension:

Where the conditional needs to be a boolean value or a 0-1 dice roll, and the result would be similar to an existing valid anydice expression in the dice case:

Except it would take into account that the rolls are dependent rather than independent. Although to be fair, these might be equivalent by some statistical reasoning that currently escapes me.

So, how do I do this with the current version of anydice?

EDIT: Now that I know the answer, I can say with confidence that the independent and dependent versions of the resulting distribution vary a lot, most notably with the fact that treating the first roll as two independent rolls has a decent chance of being 0, whereas the dependent version has no chance of ever being zero. Which makes sense, if no term gets "selected".

You're trying to do a conditional on a value which is a die, which anydice doesn't like. In order to do a conditional comparison on the result of a die, you have to instead cast it to a number in the function definition. Try changing the last part of your program:

The FAIL:n parameter in the definition indicates that a number value is expected, and as per the documentation on functions:

So rather than referring to the INT_FAIL_CHANCE external variable, provide it as a parameter to the function converted to a number, which anydice will then accept.

If you care about the specific roll, pass it to a function

INT_FAIL_CHANCE is a die when it is being used in a boolean expression, which is what AnyDice is complaining about. The fix is to pass that die to a function as a number. That function will then be run for each possible outcome on the die (which is what we want to get a distribution). We force a function parameter to be a number by appending :n. Applying that change to the sliver meteor function we get: 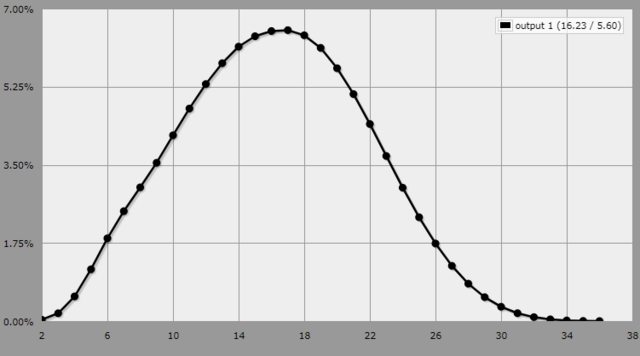 Which is identical to what I got with a different approach. That approach is perhaps more linear in a approach (and probably less efficient), but the agreement between methods is promising.

It's hard to know exactly how things are implemented under the hood, but it seems like maybe this would work as a language extension:

AnyDice doesn't currently support such a ternary conditional operator, but in theory a future version of AnyDice could add such an operator without any major difficulty.*

In the mean time however, as I noted in my answer to an earlier question here, you can define a custom function that works the same way:

Note that, for the function to work as expected, the CONDITION argument must be coerced into a number by tagging it with :n in the function definition. If (an expression that evaluates into) a die is passed to the function as the condition, this causes AnyDice to evaluate the function for each possible value of the die and collect the returned results (which in this case are just the other two arguments) into a custom die.

On the other hand, the A and B arguments are untyped, so AnyDice will pass their values to the function unchanged. (However, since AnyDice doesn't support sequence-valued dice, combining the results of the function into a die may still cause any sequence values passed in as those arguments to be summed.)

Also note that, for optimal performance, the CONDITION argument should always be a "boolean die", i.e. a die that can roll at most one non-zero value. That's because AnyDice isn't smart enough to realize that all non-zero CONDITION values yield identical results for this function, and will waste time evaluating the function for each of them. Fortunately, these kinds of "boolean dice" are exactly what AnyDice's comparison and boolean operators (=, !=, <, <=, >, >=, &, |, !) return when applied to dice, so they'll work fine with this function.

*) How do I know this? Because my (alas still unfinished) reimplementation of AnyDice in JavaScript includes it as a syntax extension, using exactly the syntax suggested by the OP. Conveniently, it doesn't interfere with any existing AnyDice syntax in any way, and the implementation is straightforward — just like the example function above.

With the algorithm provided, the error is coming from the function sliver_meteor. The condition INT_FAIL_CHANCE > 0 is a sequence variable compared to a number. If I plug in 1 or 0 into that condition instead, I get results without a problem.

If I bypass the normal output using that function and output INT_FAIL_CHANCE, it gives my a graph of 0 with 35% and 1 with 65%.

10
How can I execute code depending on a die value in AnyDice?
4
AnyDice error: Boolean values can only be numbers
4
How do I model an iterated series of combat rounds in Anydice?

10
How can I execute code depending on a die value in AnyDice?
3
AnyDice functions and subsequent dice rolls
11
How can I use AnyDice to simulate rolling 6d6, and dropping the 2 lowest and 1 highest dice?
11
How to calculate conditional probabilities in AnyDice?
8
Counting fails and successes in dice pools in Anydice
10
How can I calculate the sum of 2 random dice out of a 3d6 pool in AnyDice?
1
How do I check the lowest roll in a pool of mixed dice in Anydice?
5
Anydice: Counting Successes and Rerolling Failures In Dice Pools
4
AnyDice error: Boolean values can only be numbers
8
How can I get an AnyDice conditional to convert a sequence to a boolean?