What are the origins of the Displacer Beast?

The displacer beast is one of the game's iconic monsters. But it does not seem to come from the same kind of medieval bestiary like the gorgon, or from cheap plastic toys like the owlbear or bulette. 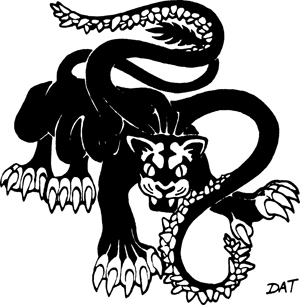 I've seen claims that the monster was vaguely inspired by a PJ Farmer critter in his "Created Universes" series, or that it came from A. E. van Vogt's Voyage of the Space Beagle.

Does anybody know what its literary (or other) origin is?

monsters dungeons-and-dragons content-identification
Share
Improve this question
edited May 13 at 10:47

It was inspired by a creature called the coeurl.

You are correct: it was inspired by the coeurl, from A. E. van Vogt's 1939 science fiction story Black Destroyer, which was later made into the first six chapters of his 1950 novel The Voyage of the Space Beagle (1950).

[...] the Displacer beasts I ripped off from the novel, Voyage of the Spaceship Beagle...if I recall rightly. That was one of the monsters in there - they sucked out something from humans with their tentacles, I don't remember!"

From the description, he can only be referring to the coeurl, the antagonist of Black Destroyer, which absorbs phosphorous (in the novel, potassium) from living beings. It is also described as having the ability to control vibrations, which the AD&D 1e Monster Manual describes is the origin of the displacer beast's displacement ability. To quote Wikipedia's summary of Black Destroyer:

A Coeurl, a large, intelligent, black cat-like animal, considers its near-future starvation as its food source of id-creatures has been hunted to extinction. [...] They lock him up, but the Coeurl's ability to control "vibrations of every description" allows him to easily open the electric lock.

And as per Wikipedia's summary of The Voyage of the Space Beagle:

Coeurl, a starving, intelligent and vicious cat-like carnivore with tentacles on its shoulders, approaches the ship, pretending to be an unintelligent animal, and quickly infiltrates it.

Gygax also confirmed the work as the displacer beast's inspiration in a forum post on February 12, 2005:

Q: Was the displacer beast inspired by the Couatl [sic] in Van Vogt's "Voyage of the Black Destroyer"?

A: It was Van Vogt's Voyage of the Space Beagle when i read it...but I suspect the story is the same, yes :D

The displacer beast was most assuredly inspired by A. E. van Vogt's Voyage of the Space Beagle.

Displacer Beast--Vaguely inspired by a PJ Farmer critter in his "Created Universes" series, but not drawn from any specific thing therein.

However, it's possible he was mis-remembering in this instance.

Not the answer you're looking for? Browse other questions tagged monsters dungeons-and-dragons content-identification .

122
Why is the D&D gorgon a metal bull?
83
What's the inspiration for the owlbear?
13
Does Cloak of Displacement hide your character's location or do others see two bodies?

8
What are the scenes & monsters on the covers?
11
What is this humanoid moose monster?
7
What is this underground giant creature?
8
How do Displacer Beasts' life cycle and reproduction work?
18
What are the 5E origins of the Mind Flayers?
13
What is the "strange platypus-like creature" referenced in abberant mind's origins?
5
What are some of the the first examples of feats in D&D?
2
What was the first original liminal being in D&D?