How does off-hand spellcasting with two implements work?

With the Dual Implement Spellcaster feat, you can add the off-hand implement's enhancement bonus to damage rolls.

2) Is it even possible to cast a spell through the off-hand implement or do you have to designate one of your hands as your main hand and hold the implement you use in that one?

1. We get no benefit from the DIS feat if we cast with the off-hand implement.

2. We can cast through our off-hand implement...

...though we must designate main-hand and off-hand to determine the application of the feat as per above.

BUT: This is a weird fringe case with no explicit rules.

I'm gonna get wordy here, because so far as I can tell there is no official ruling on handedness as it relates to implements. The best we can do is look at weapon rules for these cases, and try to extrapolate, and then decide if that inference is valid.

Why am I talking about weapons?

Because Dual Implement Spellcasting did it first, and they're fundamentally the same thing for purposes of balance.

At their base mechanical function, weapons and implements serve identical purposes. They both provide a progressive enhancement bonus (+1 through +6) to the attack and damage rolls of powers channelled through them (and follow the same price advancement). With some bizarre exceptions they must both be held in at least one hand to be used. They each usually have powers or features that can only be used with attacks that use the item in question.

The feat in question uses a term ("off-hand") that is otherwise exclusively reserved for weapon mechanics. I believe that if they meant something more vague like "other hand," they probably would've said that instead; this may be optimistic on my part, but I'm running with it because I prefer "not so much leaping to conclusions as building elaborate cantilevered structures so as to reach conclusions more efficiently for prolonged periods."

So, what are the mechanics for off-hand weapons?

Off-Hand [from the DDI Compendium, also verbatim in RC 270]

An off-hand weapon is light enough that the attacker can hold it and attack effectively with it while also holding a weapon in his or her main hand. An adventurer can’t attack with both weapons in the same turn, unless he or she has a power that allows such an attack, but he or she can attack with either weapon.

I also found a parenthetical that may help clarify things, in the Two-Blade Fighting Style ranger feature [PHB1 104]:

(Make sure to designate on your character sheet which weapon is main and which is off-hand.)

In addition to this parenthetical, there's a plethora of items and features and powers which treat handedness as permanent ("while you wield this weapon in your off hand" isn't "when you consider this weapon to be in your off hand"), and many powers and feats (including this one) are obviously balanced on that assumption.

Together these indicate that handedness is permanent: characters are not ambidextrous, nor can they choose to change which hand is their primary. "Off-hand" is a mechanical term that means something definable and permanent to a character. (It also strains credulity that all adventurers are perfectly ambidextrous, but I won't argue realism on a 4e rules question.) This is the crux of the issue.

If we allow ourselves to generalize what we learned from the off-hand weapon rules, when we dual-wield implements we must signify which implement is in the main- and which in the off-hand.

The off-hand weapon rules I've co-opted for implements say we get to choose which implement to attack through without penalty. This is how I answered question two.

But, DIS only gives the damage bonus when attacking with the main hand. This is how I answered question one.

If we want to cast through the implement currently in our off-hand and gain the enhancement bonus from the implement currently in our main hand, we must switch implements to the other hands. Feats and items which allow us to do this efficiently are outside the scope of this already-lengthy answer, so I'll link to Bag of Blades: A Guide to Off-Hand Properties and Free Action Item-Swapping and RPG.SE's own (slightly outdated) What action type is switching two items between main hand and off-hand?.

[On a side note, "staff" and "quarterstaff" are two separate items: a "staff" is a one-handed implement which can be wielded as a quarterstaff weapon but not enchanted as one, and a "quarterstaff" cannot be used or enchanted as a "staff" unless an exception is explicitly made. I mention this because my research for this question brought up dozens of attempts to use "DIS" with a single staff.]

According to the official Online Character Builder, you do get the bonus on both implements.

If you build a character in the online builder and train the Dual Implement Spellcaster feat, then equip two implements and view a power, the breakdown analysis shows the off-hand enhancement bonus being added to both weapons. 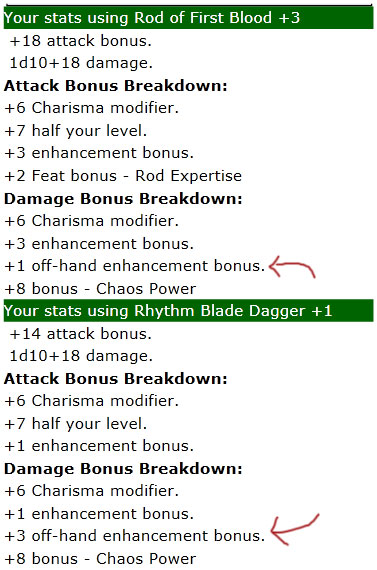 Also note that both implements give the other implement's bonus as the "off-hand enhancement bonus" rather than both giving the enhancement bonus of the implement equipped in the off-hand. The Dual Implement Spellcaster feat states:

When you use an arcane attack power and you are wielding a magic implement in each hand, you can add the off-hand implement’s enhancement bonus to damage rolls.

Not the answer you're looking for? Browse other questions tagged dnd-4e feats spells or ask your own question.

17
What action type is switching two items between main hand and off-hand?

8
Does the damage caused by Wall of Fire get the implement bonus when a creature walks into it?
17
What action type is switching two items between main hand and off-hand?
8
Is there a feat for melee characters equivalent to Dual Implement Spellcaster in D&D 4e?
6
What bonuses apply to Flame Spiral's Effect line?
4
Can a hexblade's pact weapon count towards a set bonus?
2
Attacking with a blade in main hand while holding a bow in off-hand in 4e?
7
Staff as implement: one hand or two?
10
Can Mage Hand Legerdemain load a hand crossbow? What about two hand crossbows?
16
Can I draw 2 weapons with the same hand (throwing one and then drawing another) using the Dual Wielder feat?
5
Does the Produce Flame cantrip need a free hand?