Is there any estimate of average damage output per turn for PCs by level?

For monsters, we have the guidance of how much damage they are expected to deal in a round based on their CR from the DMG on page 274. In contrast, there is no such explicit guidance for expected PC damage output per round and level.

That damage output output clearly can vary wildly, both by character build, and by class -- some excel at nova-damage, pouring limited resources into big effects, others are strong on sustained damage over time. But the designers must have had some rational expectation of what it would be, when they designed the system.

I understand that this cannot be answered exactly, as there are way too many moving parts. I'm not looking for exact. I'm looking for rough, average damage at each level, across all classes. Essentially anything that it better than the nothing I'm currently aware of.

Is anyone aware if there is a resource with statistics for this, either empirically collected from something like Adventure League play, from someone who recorded it for their play group, or from someone who collected stats for a popular streaming show like Critical Role; or from the designers talking about it in interviews; or theoretically, from deriving this from fundamentals of the combat and CR system; or from simulating/estimating this for a range of character builds?

You can calculate this by reversing the CR tables. For example CR1 is a medium encounter for a party of 4 level 1 characters. CR1 has 71–85hp, if you assume it takes 3-5 rounds to kill an encounter that means you can assume 3.5-7 DPR per character.

If you continue through the table in the DMG you will arrive at an answer that is a rough average across all classes, builds, and party composition. It's certainly better than nothing, and is in line with the designers' intent.

This methodology will give you an answer that seems to agree with longstanding optimization artefacts like The Optimists' Guide to D&D 5E Damage by Class.

This answer is to supplement to user77842's excellent answer with the the details worked out across all 20 levels. The overall summary of this is expressed in this graph: 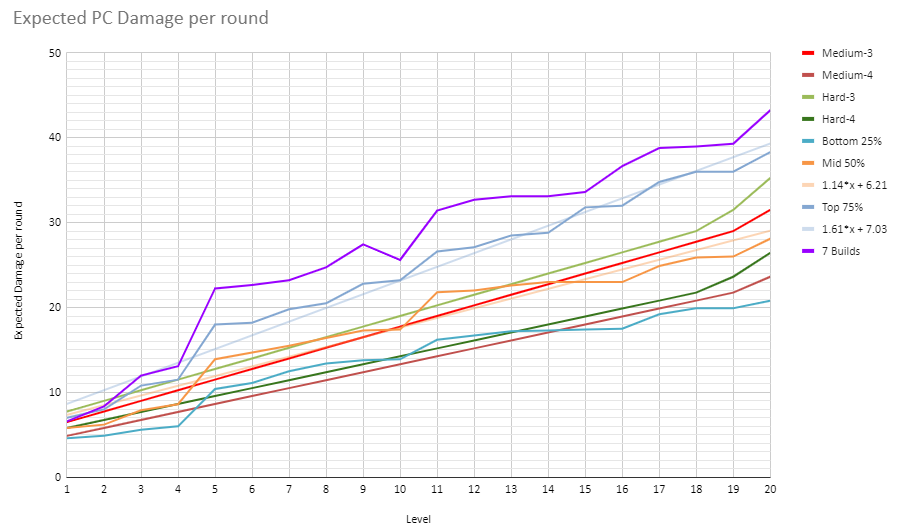 The number 3 and number 4 refer to three or four rounds of combat per encounter. Three is assumed to be standard, because the DMG in the monster building rules (page 278) tells us:

If a monster's damage output varies from round to round, calculate its damage output each round for the first three rounds of combat, and take the average

Four is based on empirical data at one specific table.

The Bottom 25%, Mid 50% and Top 75% in contrast to this are the quartile averages from the Optimists' Guide to D&D 5E Damage by Class. This is averaging damage per level for 360 different builds in 13 classes and 48 subclasses. While it has to make some assumptions about hit rates and monster AC per level, those are well established. This approach is orthogonal the first in that it does not depend on rounds per encounter, so it provides a great reality check. For the Mid 50% (average PCs) and Top 25% (high damage PCs), the graphic also provides a trend line with associated formula to estimate the approximate damage per level x.

Lastly, the 7 builds line is from seven damage-focused builds without Great Weapon Master or Sharpshooter (Champion and Battlemaster Fighter, Assassin Rogue, two different Hunter Rangers, Vengeance Paladin, Berserker Barbarian), made by myself to compare to Optimist Guide as a check. This one makes assumptions about number of combat rounds (4) and encounters per day (5) to factor in damage from limited resources like spell slots or bonus actions to cast things like hunter's mark. I think it is not unexpected that it is a bit higher than the average of 90 above-average builds in Optimist.

Always keep in mind these are merely averages. In any individual fight, the duration can vary greatly from the expected average: it can be over in the first round, or it can drag out for many, many rounds with sides taking cover, jockeying for position, reinforcements coming in and so on; and likewise the damage output per character can vary wildy with the wizard casting fireball one turn, fire bolt the other, the paladin critting one turn with maxium divine smite damage, and missing altoghether the other, an so forth.

1 This is pretty close but not quite exact. The chart below shows in blue where the XP for four characters to be gained equals the XP of the monster most closely (ratio as close to one as possible). If it was an ideal match, then the ratio would be 1 across the chart in the blue fields, and there would be no yellow fields, which show the Level=CR diagonal. You can see that after 10th level, it would be a better match to encounter a monster 1 CR lower than the party level.

Here is the same chart for Hard encounters. You can see that after tier one, it would be a better match to encounter a monster 2 CRs higher than the average party level, and also that the best match of a single monster is sometimes more than 10% off.

2 That the average damage from monster challenge rating scales near-perfect linearly with level is to be expected: hp per monster CR scale linearly by 15 points each level after 1st, until near the very end when it jumps up at level 19, which is where the slight uptick at the end comes from.

71
Is the old "Linear Fighters Quadratic Wizards" problem still around in 5e Basic?
19
What deals more damage on a weapon, +1 to hit or +1 to damage?
19
Is there an accepted likelihood of hitting that is consistent across tiers, and how has it been determined?
7
How does the critical hit positive feedback loop affect average damage?
9
How many rounds does the average combat encounter last?
16
Which Fighter (TWF Fighter vs. Great Weapon Fighter) is better optimized for Dealing Damage?
10
Can I use the Monster Stats in the DMG to estimate a party's damage output?
7
Are there guidelines for party stats by CR?
1
Are there statistics on how many encounters-per-day most tables have?

9
Average/optimal AC for core classes per level
10
Are there average damage-per-round guidelines?
4
Are there any rules for damage from an explosion?
15
Achieving highest Rogue DPR at 3rd level using PHB+1
10
Can I use the Monster Stats in the DMG to estimate a party's damage output?
2
How do you calculate average damage for DPR comparisons?
20
Which Armor Class values should be used as controls when making damage calculations?
2
Are there any feats that could increase damage output of spellfire's damage?
11
Does the Bracer of Flying Daggers really let a thief make 4 attacks per round?
8
What class has the most damage output per round at level 6?