How to play as a dual-wielding monk?

I have read quite a few questions that have skirted around the idea I was considering, such as tri-wielding, unarmed dual-wielding, and dual wielding with single staff, but none that really spoke to the mechanics involved for the build I'm considering.

I'm aiming for is a wild man with a barbarian's fighting spirit, but who relies on speed and dexterity over strength, being as unpredictable as the sting of his twin spears. What's more, his personality outside the heat of the fight is one of a paradigm, a fighter for justice as noble as the Paladin yet as unbound as the wind... which is why I chose the Monk class. (Photo to denote the weapon) 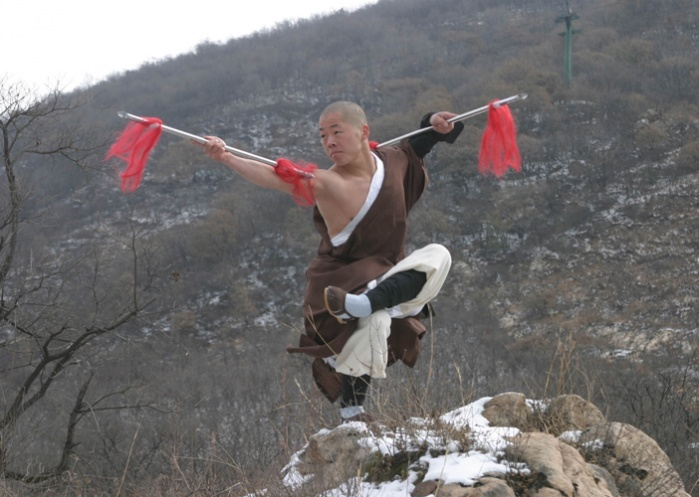 While the focus on Wisdom would speak to his ideals, Unarmoured Movement to his speed, and Martial Arts to his dexterity, I still fall short on how to implement his two spears as even considering that his off-hand spear could be a hooked shortspear (for the light trait), and that this is a legit practice in Wushu martial arts, D&D Martial Arts only allows unarmed attacks to be used as a bonus action:

So what I'd like to know is if there are any mechanics, feats, or class features that I am missing to make such a build possible, or if this would be too unbalanced for a DM to consider accepting the weapon to be used with Martial Arts of Flurry of Blows?

Have you considered visiting Flavor Town?

What I mean is the base monk already does what you want mechanically, and just needs a little adjustment thematically. The monk already gets four attacks at 5th level if they use Flurry of Blows, which is more attacks than they would get using their bonus action for Two Weapon Fighting. Sure, the rules state that the Flurry of Blows attacks must be unarmed strikes, but they don't say you have to imagine or narrate those attacks as unarmed strikes. All the base monk needs is a little reflavoring to achieve your desired theme. There's simply no need to let the rules get in the way of how you theme your build, because you can flavor it however you like without changing the base mechanics at all.

I'm setting aside Thomas Markov's solution assuming that doesn't work for you, and will be looking at what's needed to do this within the system. The short of it is that you'll be needing some feats.

The first bit of bad news is that Martial Arts and Two Weapon Fighting don't really mix as both use your bonus action, and there's no Monk version which mitigates this. The only really weapon-focused subclass, the kensei, gives you martial weapons as monk weapons instead.

On the other hand, there's nothing stopping you from just using two weapon fighting. Any character wielding a pair of light weapons can do so. There's two outstanding issues, firstly you won't add your ability modifier to the damage of the bonus action attack this way, and spears aren't light.

In order to add the ability modifier you'd need the Two Weapon Fighting style, which you can take via the Fighting Initiate feat (Tasha's) which your shortsword proficiency qualifies you for. To get past the light property limitation, you'd need the Dual Wielder feat (PHB). Now you'd be fully able to dual wield spears without it being an obvious downgrade on using Martial Arts.

It's worth looking at what this is netting you. You don't really get to benefit from Martial Arts bonus action, and Flurry of Blows still use unarmed attacks. During T1 (1st to 4th level) you do get a damage upgrade since the spear's damage die is a d6 and Martial Arts' a d4. During T2 you'd have parity, and above that Martial Arts would upgrade the spears' damage dice maintaining the parity. You have gained a +1 to AC, changed your damage type to piercing, and synergize better with weapon buff spells (if those are relevant) and magic items. Hypothetically, you could grab Polearm Master to get oppertunity attacks when approached, but you obviously wouldn't benefit much from the bonus action attacks.

That's not a very powerful benefit from the investment of two feats, but it does get you where you wanted.

As your DM for a "paired shortspear".

Basically, invent a (balanced) weapon that does what you want.

A paired shortspear might be a 1d6 piercing weapon (thrown range 20/40) that, when wielded in a pair, can be treated as a single 1d8 piercing weapon. If you do so, you cannot use make a two weapon fighting attack with it.

This is basically a quarterstaff, mechanically (except piercing damage, and short throwing range, and the fact you can't switch to 1 handed mode without an object interaction or dropping a spear).

Your monk still attacks with fists and feet and their body as part of their martial arts/flurry of blows, but you now have a reason (mechanically) to wield two spears. As the paired spears (mechanically) behave like an existing weapon (quarterstaff), this isn't an attempt to cheese anything.

So you have mastered the spear...

So what I'd like to know is if there are any mechanics, feats, or class features that I am missing to make such a build possible

Yes. Ki-Fueled Attack, an optional monk feature from Tasha's Cauldron of Everything. If you can find ways to use Ki points as part of your Action, you can use an unarmed strike or monk weapon to attack as a bonus action. Not dual wield, but attack.

This is typically used to make extra attacks with weapons wielded in two hands, like longswords (katanas) or longbows (or muskets), that become monk weapons as part of the Kensei's ability or as part of the Dedicated Weapon optional feature (also from TCoE).

There is potentially some kind of synergy with Dual Wielder adding +1 to AC while holding two weapons, on top of Kensei adding +2 to AC if you attack with unarmed strike while holding a kensei weapon. With utter focus on wis and dex, you could get a reasonable AC, although only reasonable - armour + shield outpaces you at lower levels, and wizards et al ability to escape from melee attacks in various ways outpaces you at higher ones.

if this would be too unbalanced for a DM to consider accepting the weapon to be used with Martial Arts of Flurry of Blows?

No. There is no particularly powerful combinations allowed by using a weapon instead of unarmed strike for martial arts and flurry of blows. A few builds do use monk-with-weapon, but usually they rely for their power on other elements of the build and the bonus action attack from monk is an afterthought that could be added in other ways.

A DM not allowing this for balance reasons is misreading the math of the ability.

...but have you mastered it well enough?

With two weapons, what you are mostly getting is +1 AC from the dual wielder on top of Kensei's +2. To get that you need a feat, to spend one of your attacks not using your weapons and then your bonus action attack (offhand) loses dex to damage any turn you don't spend Ki on your main attacks. This can be fine in a fairly non optimized game if you go Variant Human for the free feat and you're using point buy (so +1 on top of 15 gets you 16, and +2 from another race would get you 17 - same modifier). But 5e games tend to be optimized due to the fairly simple math and obvious optimization routes included in the game - you rarely see a character without a maxed out fight stat from character creation.

It's simply the case that outside of some fairly considerable cheese, dual wielding just sucks. It's sucked for like 4 editions of D&D at this point. Monk having built in extra attacks from early can be used for some stuff like Hexblade dip to add damage to all those attacks, but two weapon fighting just overlaps too heavily with what they can already do - the few builds that make use of Kensei are usually using it to bypass two weapon fighting limitations with a 2h weapon, usually a 2h ranged weapon (for Sharpshooter) so it doesn't add a lot to what you're doing if you're already using two regular one handed weapons anyway.

Essentially, and especially if your GM is a stickler for RAW/not even reflavouring stuff, you will do better as a Fighter or a Barbarian than a Monk if you want to use two spears or batons. Monk gives more flavour with deflect arrows and slow fall and stuff though, so you might choose that for that reason, but damage and survivability wise you will be lagging behind even other monks, which is saying something.

24
Can a fighter two-weapon fight unarmed?
10
Can a monk combine Martial Arts with Dual Wielding?
5
Can a monk's single staff be considered dual wielded, as per the Dual Wielder feat?

10
Can a monk combine Martial Arts with Dual Wielding?
12
Will holding anything that isn't a monk weapon cause a monk to not benefit from Martial Arts?
12
What monk features are disabled whilst wearing armor?
21
Does a monk with Extra Attack trigger Martial Arts if only one attack is unarmed?
13
Can a monk use a shortsword for the bonus action attack of Martial Arts?
6
Does a monk get martial arts die damage on improvised thrown monk weapons?
6
Does a Shove or a Grapple count as an "unarmed strike" for purposes of a Monk using a bonus action for a martial arts attack?