Is there, or has there been, an official list of what aura magic items give?

In the 5th Edition description of detect magic, it states:

...you can use your action to see a faint aura around any visible creature or object in the area that bears magic, and you learn its school of magic, if any.

The sensing of auras has been pretty universal throughout many editions of D&D. In a campaign I'm building, the schools of magic will play an important role. Each school is represented by a color, is diametrically opposed to another, and so forth. Because of this, I'd like to adjust my descriptions accordingly. Instead of:

The wand radiates Enchantment and some Necromancy.

The wand is glowing orange with black veins pulsing to the beat of some unknown heart.

However, in all my research, I've never seen a list where magic items have been matched up to the aura they radiate. Some I could guess as being what spell they replicate, but there are too many that wouldn't match up easily.

I understand that the description states, "...learn its school of magic, if any." I would prefer not to rule, "If it doesn't cast a spell, it doesn't have a school of magic." That just seems like a cop out, but it may be the only answer.

I'm not asking for how to match items up; that would be opinion-based and likely "needs focus". I am asking for something WotC (or an affiliate) has put out with a table/ruling. Obviously, if the list came from an older edition, things won't match up exactly, but would give me a good starting point. And if it turns out, that non-spell casting items have no school, then so be it.

I keep a "world inventory" of magic items in my campaign notes that contains this information.

Is there an official list? No, at least, not for 5th Edition. But I have to make this answer more interesting than that, so I'll tell you how I handle exactly this issue in my campaigns.

First, and I think everyone should do this for longer campaigns, keep an inventory of the magic items that exist or could exist in the world. This doesn't work so well if you use random tables for giving out loot, but I don't do that. At any given time, this list will have the party's existing magic items and information about those items, any magic items owned by significant NPCs and information about those items, and a pool of items I've hand selected for adding to loot or shops. The biggest this list has ever gotten for me is 15 or 20 items, thereabouts.

As I mentioned before, there is no official list for this. But because I have had my players ask me several times what school of magic a magic item was, I started adding that information to the details I include in my magic item inventory. The way I determine the school for a particular item is to compare to spells of similar effect, and consult the brief school descriptions given in the Wizard class description. For example, I give basic +X armor and weapons the Transmutation school, since magic weapon is a Transmutation spell and the description of Transmutation is about magically altering natural things.

I do this for every magic item I add to the world, so when a player inevitably detects magic on an weapon in a shop, or the sword on the king's side, I've already taken the time to think through it and don't have to give an off-the-cuff answer.

If you are looking for someting blessed by WotC, you can use the lists from D&D 3.5. The items are mostly the same, the schools are also the same, and 3.5 gives you an offical school, for example for bag of holding, it is moderate conjuration. Most of them are freely availabe via the SRD, too.

I don't think there is an offical mapping list for 5e. You can guesstimate the school based on the function of the item, by looking at the school that spells with these functions have. Or you can look up the spell used to create the item in 3.5, which determines the school and is always provided, and assuming the spell is still the same, use its school (in case the school has changed between editions). For example, spells and effects that conjure something or transport you are all conjuration.

I have used this one as a quick lookup in my DM screen, to save myself the boring administrative task to maintain long lookup lists. My experience is that during play time, flow and quick resolution trumps poring over books to look up the "correct" answer (even if there was a list, really). For the most part, it does only matter for the players to get a suspicion of what something could do:

For the color of the various auras, D&D Beyond has a symbol for each school of magic next to the spell (the symbols match those in the various depictions of magic items of those schools), representing the school, and these school symbols are tinted in color. I'm not sure how official those are, but this is about the most "offical" color I am aware of: 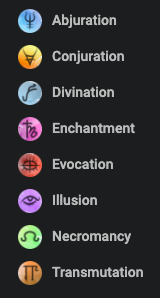 13
How does identifying a scroll work?
15
Has there ever been a class that creates magic by drawing it?
10
Can a spell being cast via a magic item be considered to be more than one class' spell at the same time?
8
Can a non-magical "Detect Magic"-type trait sense magic when used within an Antimagic Field?
0
Is there a discrepancy between the strength of aura when detect magic is cast comparing a ring of protection to a weapon with an enhancement bonus?
6
How does Detect Magic interact with living bodies?
6
Can a closed Magnificent Mansion portal be detected and identified?