What spell can turn a large area of dirt into mud?

What spell could flood an area sufficiently big to be filled by several dozens barbarians, with enough water to turn the entire surface into mud for at least several hours and significantly slow down any movement (mud depth: at least 30 cm / 1 foot)?

Transmute rock to mud has been discussed before but it doesn't seem to apply to dirt. Control Water could be useful but it requires a body of water nearby. Watery Sphere explicitly states that the water vanishes at the end. 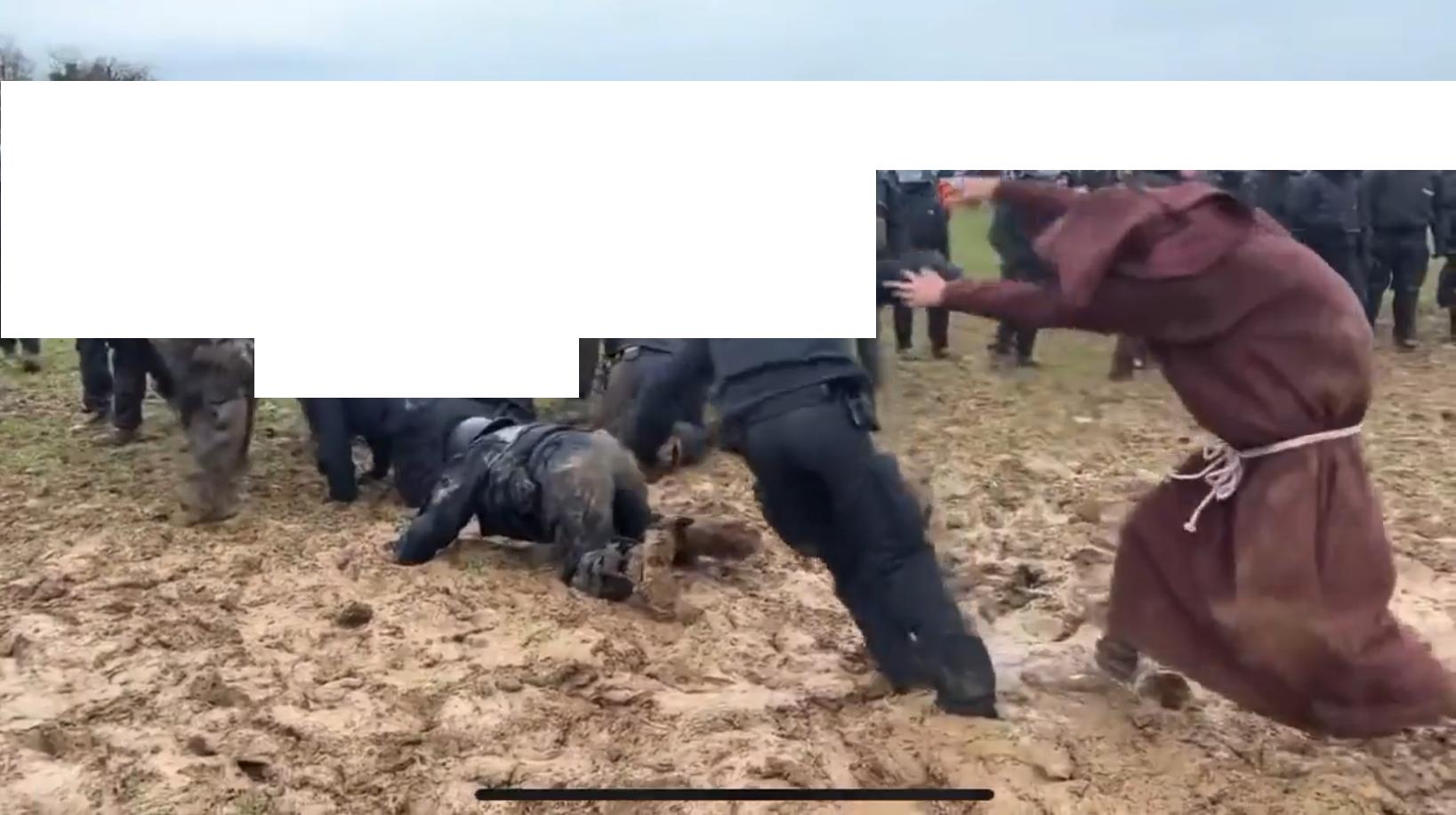 Mirage Arcane (7th) - one and done

Mirage Arcane is a 7th level illusion spell on the bard, druid, and wizard lists. It has a casting time of ten minutes, but can include such a large area that it would be easy to 'catch' an infantry unit with it, since you can start casting it when they are more than a mile away.

You make terrain in an area up to 1 mile square look, sound, smell, and even feel like some other sort of terrain[...]. The illusion includes audible, visual, tactile, and olfactory elements, so it can turn clear ground into difficult terrain (or vice versa) or otherwise impede movement through the area.

While it doesn't actually change the terrain (it is just an illusion), even creatures which are aware of the illusion are still forced to physically interact with it. Thus anyone that manages to emerge from it can be further bogged down by arguing with them about in what sense is not 'real' if it looks, sounds, smells, and feels like something else.

This teaching experiment suggests that mud can be made with 3 teaspoons of water per cup of oven-dried soil. If you want 1 foot deep of mud in a 40' x 40' square (to compete with transmute), that would be enough water to affect 191,501 cups of soil. Thus you would need 574504 teaspoons of water, which would be 748 gallons, or 75 castings of the first level create water spell. Fortunately you can upcast: by the time a circle of the land druid is 13th level, they can put out more than 610 gallons using create water in a bit over an hour. Since our estimate of 750 gallons is for soil that has been baked dry, you will almost certainly need less than that, especially if the soil has lots of clay and has poor drainage. Of course, just dumping the water on top of the soil (even with the helpful raincloud application in create water) won't make mud of a foot depth. For that I would recommend that you use the mold earth cantrip to work the water into the soil between applications of create water or while the rain is falling.

A lower-level combination of first stone then mud

As you note, transmute rock to mud (5th) does not work on the initial soil. However, it should be possible on the first round to move earth (6th) to excavate the area down to bedrock, and then on the second round to use transmute rock to mud to turn the bedrock to the desired muddy consistency. Move earth will allow you to move the soil away to a depth of 20 feet; eyeballing this map suggests that Lützerath likely has a Luvisol and one likely not need to get deeper than five feet in order to reach a sufficiently rocky subsoil on which to transmute.

Alternately, and at a lower level, rather than removing the earth down to natural stone, one could first place a layer of stone in the location to the desired one foot of thickness with wall of stone (5th), and then use transmute rock to mud on the wall. However, wall of stone requires concentration (at least until the wall becomes permanent ten minutes after casting), and it is unclear (and worth its own question) whether transmuting a non-permanent stone wall would require that you then maintain concentration on the mud, would create permanent mud without a need for concentration, would "damage" the wall so that it "collapsed", or would simply dispel the wall. Unfortunately requiring the caster to make the wall permanent first would not work unless the mud to be created needed to be in a precise location.

The spell erupting earth, cast in advance, has the mechanical effect that you want, but not the flavorful mud.

Choose a point you can see on the ground within range. A fountain of churned earth and stone erupts in a 20-foot cube centered on that point...[it does damage to creatures in the area when cast]...Additionally, the ground in that area becomes difficult terrain until cleared. Each 5-foot-square portion of the area requires at least 1 minute to clear by hand.

Control Weather (level 8) has a duration of 8 hours and allows you to:

take control of the weather within 5 miles of you for the duration. (...) You can change precipitation, temperature, and wind.

It still depends a bit on the prior prevailing conditions if you can actually make it rain, or rain torrentially, but you have a 60% chance to be able to get to one of these two effects. Just let it rain for 8 hours straight, to soak that meadow until it is a muddy, squashy morass.

P.S. And of course, Wish. Functionally, with all the slipping and falling going on in the video you linked, Sleet Storm would also be a pretty good match to be reskinned, but it would not last for hours and only has a 40-foot radius. According to the DMG (p. 249), it would catch 8 targets; if they stand as close as in the image, you can easily get a couple dozen.

10
Does Transmute Rock to Mud require a flat, exposed surface?

7
How can I reliably turn a formulaic Eye range spell into a Touch spell?
15
Can Wall of Stone be cast on dirt?
7
Turn spells into spell-like/supernatural abilities
11
What area does the Hallow spell actually cover?
14
In what direction does the area of the Incendiary Cloud spell move at the start of the caster's turn?
14
Does copying a wizard spell into my spellbook require a prepared spell slot?
25
Can the Polymorph spell turn a character into a dragon?
2
Can you use the shapechange spell to turn into a unique or named creature?