What do I need to set up and use a projector as a tabletop?

I have a really nice projector for my home theater, and I am considering using it for a tabletop gaming setup as well.

What do I need to know about mounting it? What are the tricks or issues? What should I put on my table surface to get the best picture.

What tools should I use on my computer to make the best use of this display?

Please include whether you've played with this type of setup or whether it's just an idea as I'm especially interested in practical experience and ideas.

Pat and Scott both have excellent answers. Here are some other things to think about.

First there is this link where a guy goes step by step through building a digital game table with the projector mounted from below.

Remember you can project from above or BELOW. In either case you need to figure out how far your projector needs to be from the surface to get the surface area you desire.

Remember that many video cards have two video ports. Often the included software allows you, among other things, to slave both ports to each other, or to setup multiple monitors. What I recommend is using multiple monitors with two copies of maptools. One is the server which you move to the GM Screen, the other is the client which you move to the screen presented by the port the digital projector. This way you don't have to do the "Please don't look" request you find describe on the Pen, Paper, and Pixel site.

I have used a projector for a game table, even brought it to conventions, and it is a nice way to get the 'fog of war' effect from online tools like klooge werks or maptool, the two software packages I've used, designed for online gaming, in addition to just using a presentation tool and blacking out layers.

You can also use a first surface mirror to project horizontally, then redirect down to the game table. This will give you a longer throw distance when the vertical distance from your ceiling to table is below your minimum or desired throw distance. Even with a very high quality mirror, you will lose some light and thus image quality, and it's hardly usable with a standard mirror, because of the second surface refraction. It will also need keystone correction, making one side less sharp. I've tried mylar, which is an inexpensive first surface, but it's hard to get it mounted firmly so it doesn't distort.

Most projectors do not work well with ambient light. While you don't want to play in the dark, low lighting, shades, etc will go a long way to making the map look sharp and readable. For this reason, and so I can lock the room, at conventions, if I'm going to use a projector, I ask for small room, so there aren't other groups at other tables wanting full lighting. Basements tend to work best here as the ambient sunlight is usually easier to limit.

You can use a white table, or a foam board, but I find if you can get a shiny surface, the projection will look more crisp. I use a dry-erase board and it looks great and has the added bonus that magnets stick to it, so I can use magnetic base figures, though, I typically use the index card trick (see below), as it is most convenient. 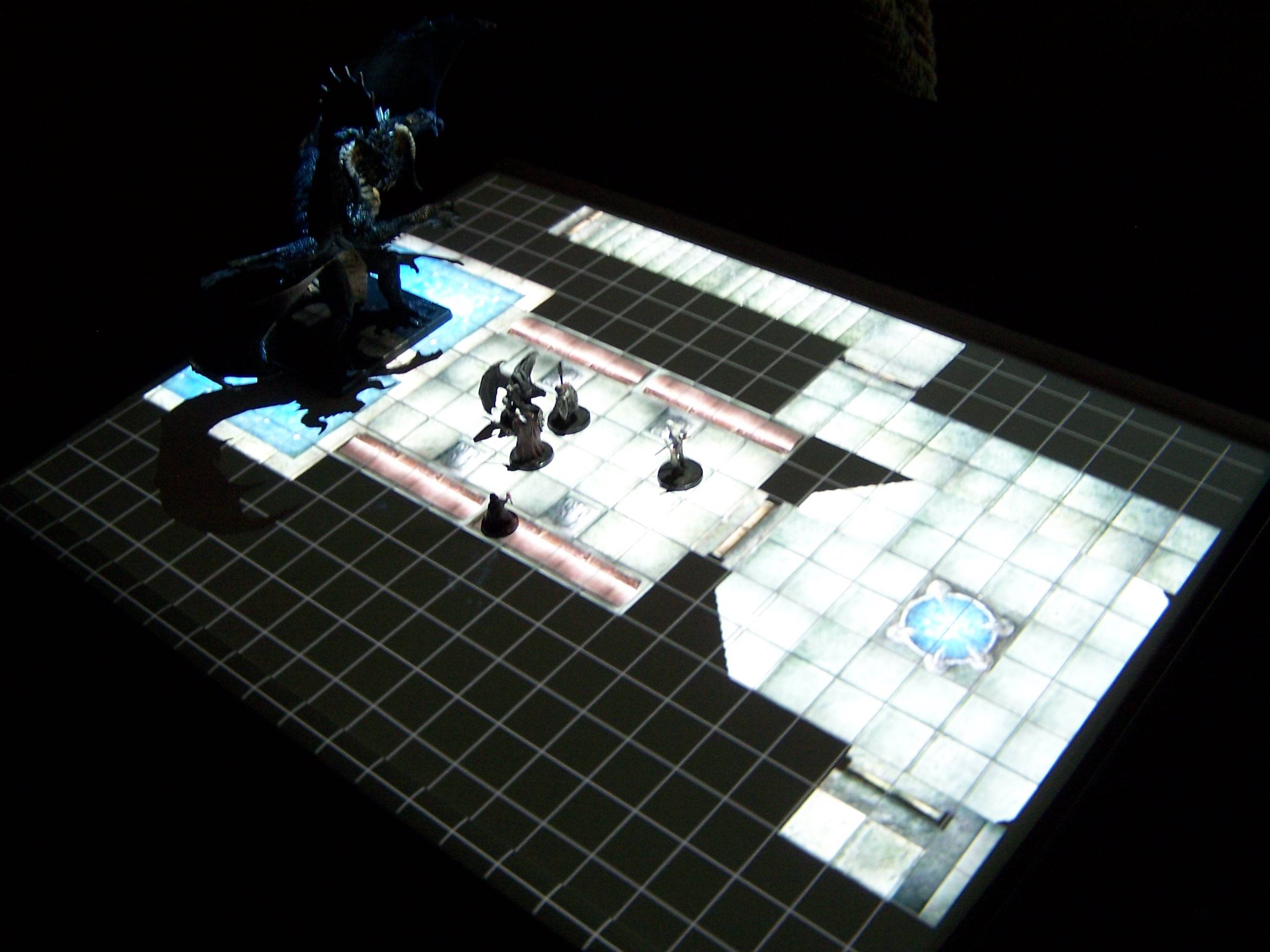 I have also used battle mats, including clear ones, but its generally easier and looks better to do the grid with the projection. I've even gone as far as using foam and a foam cutter for 3-dimensional projections. 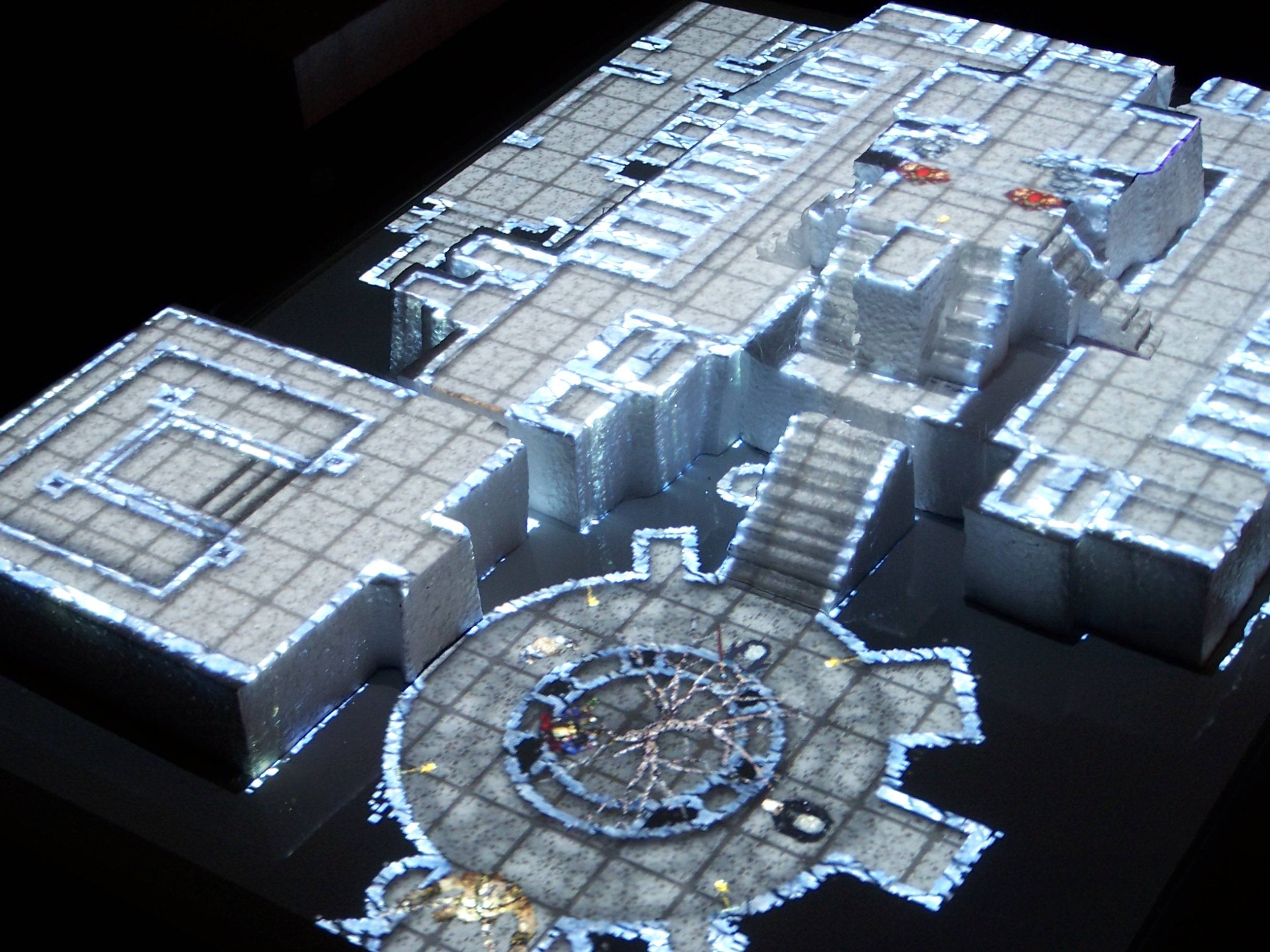 This is really important if you want to use miniatures. You will need to work out your software resolution and your throw distance (very easy to control in a static set up like a basement), so that the grid is ~1". Maptool has a "zoom" factor that is an easy way to tweak this. For a static setup, this will always be the same too.

Again, this is much more crucial if using miniatures. If someone bumps the table, suddenly all the miniatures can be in the wrong square. The heavier the table, and sturdier the mount, the better.

For a static map, you can have the players just move their miniatures as normal, but large maps where you have to slide the projection obviously don't slide the miniatures. One simple solution is to use the white side of an index card for the players, so you can just slide the card to maintain relative position and orientation.

Using miniatures is probably the simplest way to incorporate a projector, but it does have some difficulties. Also, there may be software features you want to use with a map token. Most often, I've run mixed games where the players used miniatures and as DM, I use map tokens. I typically use a "torch" token for the players, and set it to the minimum vision and light for the party. This allows me to use the software features and have the npcs already positioned and use aids (like maptool's vision, topology and lighting) to reveal as appropriate. I've also played with all players using tokens and laptops, so there's a central 'what everyone can see' and individual views as well (since often characters have independent types of vision or spot rolls).

I've even moved away from the projector to a high resolution monitor, with all the players using tokens. This works pretty will with the exception that I either have to pass around my mouse/keyboard remote or move the tokens for them.

However, to take full advantage of the online tools, you could also just play with no 'central' image around the table with a bunch of laptops. Just kind of depends on what you want to accomplish.

We have played with the map projected on the wall. It worked very well and engaged everyone. The projector wasn't mine so I can't help you in answering that aspect of your question.

The software we used is called Maptool. It is freeware and well supported. There is a very active user community. It takes some time for the DM to prep properly, but it can handle most everything.

1) space to set it up. 2) the projector 3) content to project 4) control over the lighting in the area

Depending on how you do it, you might need 5) mounting materials, possibly even ceiling mounts 6) minis, 7) materials for a display surface 8) software specific for display of gaming maps.

I've used just an ordinary drawing program (with layers) and a big-screen TV for maps before. It's a matter of getting the amount of information you want visible into a form you can use.

One consideration: a rear-projection mounting is often extremely useful; if the surface is glassed over (or is glass) you can further annotate with either overhead or whiteboard markers, and can put minis right on it, if that's what you want to do.

If you have an opaque table, then you can't project from below. From above, it might be quite difficult to fix the projector to the ceiling, or that may not be far enough away.

I would suggest fixing a mirror to the ceiling, and putting the projector facing up on a table next to the game table. This will allow you to have a large projection on the table and you can access the projector easily. Personally I think ceiling mirrors are nice anyway, and I would leave it there as a permanent feature between gaming sessions.

The other thing you could do is put your projector on a high shelf, and have a mirror just off the shelf suspended right in front of the projector. This may be a lot harder, as mounting the mirror at the right angle could be difficult.

Either way, you would want to put something white on the table, experiment with a few things, perhaps a large piece of paper or even a whiteboard if you have one. If you use paper or a whiteboard you could even draw extra information on it, the whiteboard would be better as it allows you to easily erase the info if you change settings. If you wanted the draw and erase feature of a whiteboard, you could even experiment with white paper covered with a large piece of perspex (like you get from those huge cheap poster frames.

Not the answer you're looking for? Browse other questions tagged tools battle-map .

58
How to create a dungeon based on a realistic tomb, but still enjoyable to explore?
44
In what medium does D&D get played nowadays?

11
What are best practices for the use of flowcharts in RPGs
29
Tools/techniques for optimal tabletop gaming with one remote user
18
What was this set of RPG tools called?
2
What battle maps do I use for Legacy of the Crystal Shard?
9
What writing utensil should I use on gaming paper?
11
How to map out and run an encounter set in a predominantly vertical area online?