How do I start DMing a new game after the Red Box?

I finished playing the D&D beginners Red Box with my friends. Now how do I start DMing another game? Where do I go from here?

I highly recommend adventure that comes in the official Dungeon Master's Kit: The Reavers of Harkenwold. (Note: The physical edition of this product is now out of print, Wizards has made the contents available digitally here) 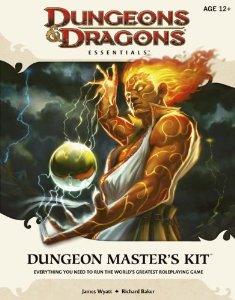 It contains many of the standard tropes of this genre of role-playing without being trivial or trite. My 24yr old daughter was a first-time DM and ran this adventure quite successfully. 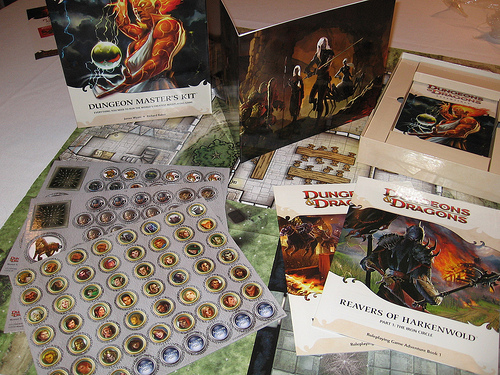 The kit is a box that includes the poster maps, the adventure as two "modules" and all the paper tokens for the characters, NPCs, and monsters in the adventure.

It's a great way to bootstrap your D&D 4e campaign. There is an unusual amount of internet support for these adventures - with adventure logs posted at places like Obsidian Portal, missing maps created by users, and even 3D terrain (if you're so inspired).

There's really three ways to go here, and it depends on the focus of your game:

The Epic Game For the GM With No Ideas

The Epic Game For the GM With No Ideas follows pre-written scenarios, and is of all of them my least favorite, because I have issues with scenarios and my groups. However, if your groups are happy doing prewritten scenarios (mine go off to kill insert beast here instead) then you can look up a D&D campaign line. If you have a DDI subscription there's a massive archive on WOTC's site (here), but I've never used my DDI subscription for that, though you can also find others on various sites, for free or with a subscription or per-episode fee.

The nice thing about a scenario-based game is that it strongly cuts down on your need for personal involvement, nice for busy and/or unfamiliar GM's. My side note here would be that if you're not sure whether or not you're busy, you are.

Do It Yourself Epic Storyline

Writing a campaign from scratch is difficult, but if you really want to you can create an epic campaign simply by looking at a source for inspiration (I like to take a somewhat obscure story and then just rename all the characters and let the players run with it, instead of whoever the protagonist would normally be, but depending on how savvy your group is they may not enjoy this, or they may spoil things for themselves).

The main disadvantage of this is that you have to write it; most professionally written campaigns or scenarios have tips for when things go off-the-rails, and if you're a novice you might not. D&D's a relatively good system for recovering from stuff like this, though, even for a relatively green GM.

Patchwork is basically when you eschew a campaign-scale narrative in favor of individual scenarios. What I did in my first game was run the basic introductory adventure (this was Shadowrun 3rd Edition, so it was a not particularly great starter in my opinion), then played the entire game as action/reaction segments, letting the players choose what to do. This can be hard for a novice GM (like the time when I did my math wrong and my players made off with $2.5M or so of gold bars), and some players will be put off a little by the lack of a defined progression.

One nice thing about a patchwork game is that if you find an adventure that's not part of a larger campaign floating about on the internet or on a dusty shelf you can just plug it straight in, since it's sort of an "Adventure of the Week" game anyway, and if you decide to make the game suddenly go into an epic plot you can easily do so with some of the characters your players will meet along the way.

This is not exactly tabletop-related, but there's an open source game called GearHead (a roguelike about giant anime mecha), that has a random plot generator that basically does what you can do with the patchwork campaign, albeit at a more crude level. It even takes important NPC's and hooks them into the plot for the more epic segments. If you take the time and dig, it has some really good archetypes (it's primarily made by an English teacher/cartoonist, so the individual plot ministories work pretty well). You can find it here, and all the files for the storyline generation will be contained in a "Series" folder wherever the game's executable is. Disclaimer: I worked on a GH creator-sanctioned tabletop game adaptation for a while, though it's on hiatus until I refine my design skills.

Adventure into the Chaos Scar! (or Scales of War, I've run Chaos Scar so I'm going to recommend that).

Reasons why Chaos Scar is a good choice:

If you're looking for a good place to start a new adventure, it's a great location with plenty of opportunities to make the story your own.

A few options for after Red Box 4E to take your next steps. It really boils down to 3 requirements - the players need to be able to make characters, the DM needs rules for running a game, and having a set of monsters to fight.

Electronic versions of the DM's Kit and the Rules Compendium are available for pretty reasonable prices. Finding the two Essentials character books - Heroes of the Forgotten Kingdoms and Heroes of the Fallen Lands will be a little tougher - you can check used bookstores or websites and probably find them.

The Essentials line is pretty nice for having incorporated much of the errata and design fixes they made to the core 4E line, plus the design is aimed at less "build crunch" (players can have effective characters without having to plan out the powers/skills/etc. as much - which is useful if you're all relatively new to roleplaying).

The Monster Vault is harder to find, but gives you a lot of monster tokens for use in play along with the book, so it's nice if you can find it.

The basic 4th Edition Player's Handbook, DM's Guide, and Monster Manuals are relatively easy to find in used bookstores or websites. They're a little more work to dig through, and you'll want to check on some basic errata (especially around Skill Challenges).

The Core materials and Essentials work together pretty well - most of the difference is the character class options and the presentation.

There's also a lot of published used or free adventures you can find and run for your group.

D&D 4E tends to focus just on the math. And to be sure, there's some art to mixing up your monsters with ranged guys, close in guys, etc. I've found, though, that's not the real source of fun - usually it's about making an exciting encounter, which isn't always difficulty based.

For me? I find it's about environment - having things characters have to jump over, climb, push objects over, dodge swinging masts etc. A bit of chaos. These things force the players to think and adapt, instead of sitting there using their favorite abilities over and over.

There's rules in the books for assigning damage based on stunts and such - that becomes my favorite pages to go to. If the player's come up with a neat stunt based on what's around, let them use it, give it a good damage, or at least, a series of conditions it will inflict on the enemies.

A lot of the published adventures expect the players to do a given action or course of action to get to the next part. This means a lot of times play hangs up and stalls because the players aren't sure what to do, and the GM is trying to nudge them over.

In the beginning, the BEST solution for this is to simply tell them:

"Hey, I'm new at this, and the adventure I have means you guys have to do X for things to go on. When I get better at this, we can start playing with adapting and improvising, but for now, how about we skip to the next part of fun?"

When you get better, you can figure out how to improvise encounters or scenes and not need an adventure at all to work with. Waiting for them to "figure it out" or trying to nudge them without actually saying anything turns into a non-fun waste of time - I spent many years of gaming on both sides of that equation and it's better to just let them know and skip to the good part.

Flow of an encounter

D&D 4E sometimes suffers from anti-climatic endings - the baddies are clearly losing, the heroes have used their major daily or encounter powers, now it's just a slug fest of basic attacks, to finish the fight that takes maybe 2-3 more turns from everyone. Guh.

Your options when this happens are to either declare the fight over ("Ok, you win") which is also kind of not satisfying, but at least stops the time from being eaten up, or to consider bumping down enemy HP from the beginning. A lot of people play by giving monsters only 75% of the listed hit points.

Anyway, pay attention to when things slow down for your game. That will give you some ideas of what might be a good solution (or at least the kinds of questions to ask folks here, or on other forums).

If there is one thing which is not terribly well designed or explained in D&D4E, it's skill challenges. The advice in the book is not great about when to use them (instead of a single roll skill check), it's not great about how to describe them, or for players to describe their actions, so a lot of people basically end up running them as "let's make 8 dice rolls! Win, Lose, Lose, Win, Win..."

Not the answer you're looking for? Browse other questions tagged dnd-4e new-gm or ask your own question.

1
How to continue d&d after the redbox
16
Homemade Terrain w/miniatures
4
What do I need to keep running D&D after finishing the Red Box?

5
3 novices, 1 Warhammer Fantasy. How do I make sure my friends don't have a bad first experience?
22
I'm fairly new to D&D but want to GM; where do I go from here?
4
Where do I go from the Red box?
4
What do I need to keep running D&D after finishing the Red Box?
8
Is there a better way to run a “rules light” or “beginner” D&D 4th edition game?
5
How do I DM the Red Box encounter 4: The Trial?
1
What is the intended amount of encounters per session in 4E?
18
New GM: How to keep control of a game