How Can I Play a Fighter Dual-Wielding Shields?

I'm rolling my very first D&D character. I'm trying to play a tank-type role in my group as a Dwarf Fighter. While looking through some forums I came across an image of an African warrior wielding 2 shields 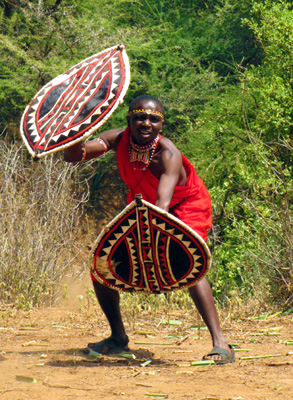 Is this even a viable option in D&D?

What rules do I need to know when building a Dual-Shield Fighter and how can I increase my damage on top adding spikes to my shield?

Here's the information I have so far:

I'm pretty sure every basic attack I make will need to be a Dual Strike at-will attack so I can hit 2 enemies in the 1 action.

I know in 3.5e you can add spikes to a shield that increases your shield damage roll to 1d6.

I've also come across information about how preforming an attack with a shield can decrease it's AC bonus but that there may be a feat that can change this, I'm unsure about this though.

A Dual Shield fighter is possible, but is restrictive and fiddly.

First, when making high-concept stuff like this, it's critical to be aware of potential pitfalls of your character. Take a look at this guide to get a sense of the traps involved.

To realize this, my first preference would be to refluff some more "standard" version of the fighter into a double-shield fighter. Holding two shields does nothing for your defensive capabilities. But, with that said, the feats of superior proficiency "spiked shield" and midnight blade student make dual strike quite... interesting. You can "shield bash" two people a turn. Of course, the problem is in good positioning and actually doing damage. While entertaining, the dual strike fighter tends to be severely "one-trick pony"-ized.

As a first time player, I would instead look towards the Knight-variant of fighter. There's less "fiddly" stuff, and the idea of a heavy shield + spiked shield can serve you quite well. It's also very very hard to go wrong with Dwarven Weapon Training, with a Heavy shield and "gauntlet axe" (if you want to fit your personal style) and just say the "gauntlet axe" is a razor-sharp shield.

Two shields as "important" only really comes into play with the Snapping Tetsudo Paragon Path, a relatively uninspiring choice, unfortunately. To be fair, Dragon Magazine 385 has a significant number of "shield-as-weapon" choices, but few of them require two shields. All that being said, I would still go with knight + dwarven weapon training, and either pretend a hammer or an axe was a shield, depending if you want to be bashy or slicy. The mechanics fit better, and the thematic imagery can be just as vivid.

Brian Ballsun-StantonBrian Ballsun-Stanton
103k2020 gold badges260260 silver badges457457 bronze badges
\$\endgroup\$
3
Add a comment  |
-4
\$\begingroup\$
Want to improve this post? Provide detailed answers to this question, including citations and an explanation of why your answer is correct. Answers without enough detail may be edited or deleted.

What if it was two pointy shields? The idea is to have a strong defense and a nice damage, dealing a half-stab/falf-blunt damage, not only bashing using the shields face, being able to still do great damage using Holy Smite. A "weapon" that, if someone attacks you from the rear while you're attaking someone, you could just retract your arm and simply block it. A warrior who focus on defense and can deal a nice damage when given the chance. 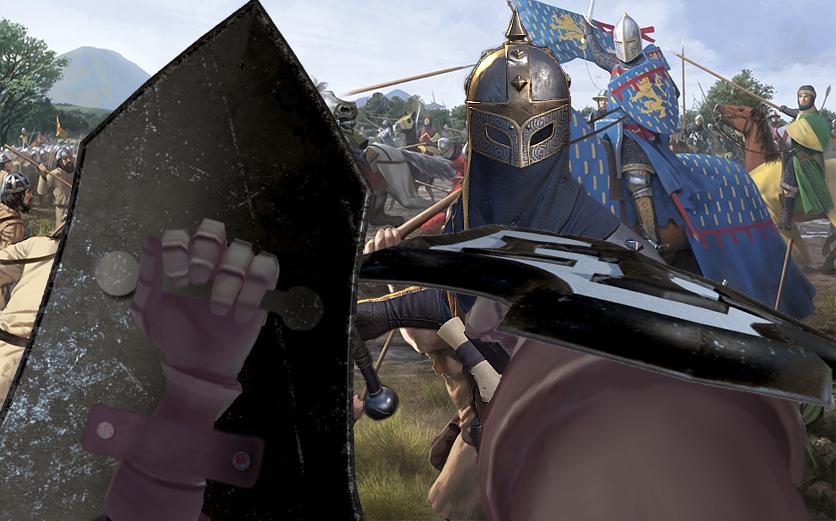 Not the answer you're looking for? Browse other questions tagged dnd-4e fighter shield .

9
What is the best way to retroactively fix a mistake? (2 shields)
9
Is a dual-wielding Eldritch Knight fighter workable?
12
Would dual wielding shields apply the second benefit of Shield Master feat twice?
14
When is the Battle Master fighter's Commander's Strike maneuver worth it?
15
What balance pitfalls result from this house rule modifying the Shield Master feat?
6
Can I cast a spell as an action and use the bonus-action shove from the Shield Master feat in the same turn?
10
Are these two homebrew shields balanced?
2
Is this homebrewed shield weapon balanced?