When determining Line of Effect with multiple targets, can you use multiple corners?

So the PHB seems clear with Line of Effect on 1 target at a time: if you can pick a corner and draw a line to any of your target's corners, it's a valid target. But what about when you're targeting multiple people with the same power? For example: 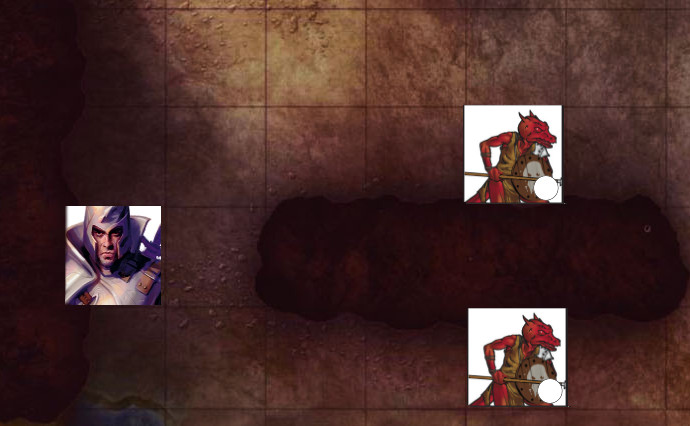 So in this example, its clear by choosing the "northeast" corner of his square, our player can have line of effect on the kobold on the north side of the wall but not the south, and if he chooses the "southeast" corner, he can target the south kobold but not the north. So, if he uses a power that has multiple targets, can he hit both with the same power at the same time? Is that answer different if it's a close burst power? Logically it would seem since each square is 5x5, unless someone was 25 square feet large, the power would originate from the same corner for all targets; if you're in the northeast corner targeting the north kobold, you can't simultaneously be in the southeast corner targeting the south kobold. But obviously logic isn't always the best benchmark for these types of things. If anyone has a non-ambiguous cited answer I'd appreciate it!

NOTE: The corner rules mentioned are only for determining cover. They are not used for determining line of effect. Line of effect is calculated based on the existence of any clear line from your square to the target square. Even an arrow slit will do here. (RC 313)

A clear line from one point to another point in an encounter that doesn’t pass through or touch blocking terrain. Unless noted otherwise, there must be line of effect between the origin square of an effect and its intended target for that target to be affected.

However, for melee, ranged and blast attacks he has line of effect, though they do have cover.

Not the answer you're looking for? Browse other questions tagged dnd-4e or ask your own question.

11
Is it possible to roll Stealth versus multiple targets when one or more can see you?
8
How do Saving Throw bonuses interact with multiple effect conditions?
2
How does non-attack-power targeting work, particularly with feat-enhanced Flurry of Blows?
9
Do burst/close burst attacks “splash” around corners?
1
Can you use superior weapons without training?
3
Can One Use Multiple Magic Items with the Same Power in an Encounter?
17
When can you use a skill if you're not trained?
4
How much ammo does an area burst weapon attack use?
3
Can I target allies with utility powers without having line of effect to them?