How can I make realistic looking potions as handouts

Ask Question
Asked 7 years, 4 months ago
Active 7 years ago
Viewed 18k times
15
votes
\$\begingroup\$
Locked. This question and its answers are locked because the question is off-topic but has historical significance. It is not currently accepting new answers or interactions.

I'd like to give my group some realistic looking potions as handouts. Does anyone have tips on how I could make these look awesome?

The hardest part about this is finding a good bottle. Bottles that look like "potion bottles" aren't that easy to find most of the year. A good prop shop might have them, but often times they're found in antique stores.

Another option is LARP (Live Action Roleplaying) stores. They're all about equipment and props, and some will carry potion bottles. Here's one that I found quickly. I don't know where you are, so I can't do a search to find one close to you, but Amazon, eBay, or Google bring up options fairly quickly.

Once you have a good bottle, the liquid is easier. You want something that people can drink safely even if it's sitting out for a while, as someone might decide to get into the game and upend the bottle. Water with food-grade coloring is safe, and inexpensive.

Sugary drinks like lemonade work too (and are tasty), but you'll want to make sure to clean the bottles after use to avoid them getting sticky. Fizzy drinks will go flat, so I don't think those are ideal.

Wine is an alcoholic option if you're playing with adults. Beer would be hard to keep carbonated in a little potion bottle and would probably look odd if it got a head after you poured it.

If you want them to be realistic, try to come up with a color scheme for types of potions and stick to it. You don't want one cure wounds potion to be blue, and another one to be red. That's confusing. You could use blue for those potions, with the darkness of the color telling you how strong it is.

If you want to label them, use tags that tie on rather than sticky labels. Sticky labels are harder to reuse, and they don't look realistic for a fantasy themed game.

Chemistry supply shops or restaurant/bar supply stores may carry test-tube like vials, and maybe even some corks that will fit.

If you don't actually want the players to drink somethink out of them, you can fill them with epoxy resin from a hobby store, and color it with any kind of pigments you like. You could mix glitter, into the expoxy, or even small objects, such as a "miniture" of a man to represent a necromancer's "soul jar". You could fill them with say, six rainbow colors & call it a leprechan's potion of good fortune. You might use some phosphorescent pigments to make it glow in the dark, or under UV light bulbs. You might even try to hide a secret UV message in a vial, and turn on the blacklights at just the right moment.

You might use blinking or glowing LEDs with tiny watch batteries in the cork/stopper to shine into the bottle. And you could use some sealing wax from a canning supply or stationary store to hold the corks in place. You could put some twine or hemp string around the lip when you wax it, so they can wear it like a necklace.

Gee, whatever you try, I'd like to see the pictures.

Don't know if you have a Renaissance fair that comes anywhere nearby, but you'll be able to find many interesting bottles there. You could also try a few stores like "Fantasy Imports" or surprisingly even some dollar stores can have interesting bottles. As far as the contents, I imagine your players would find the concept interesting even if you just used colored sand.

If you can find somewhere that sells empty perfume bottles, there are also some interesting designs.

The suggestions to use perfume bottles and chemestry shop bottles are also good, but if you're re-using a bottle, WASH THROUGHLY! You do not want to swallow anything toxic.

A very easy and cheap one to make is a Black and Tan, though I'm sure you could do similar things with vegetable oil and coloured water.

If you don't mind them not drinking the potions, then playing with viscosity can be fun; Add thicker things to some of the potions, like oil or liquid honey so that they look a bit odd when tilted. Alternatively something less polar like ethanol can make things much less viscous, though I'm not sure how noticeable that would be given what most non-chemists have access to.

Speaking of chemistry, Ace Frahm suggested test tubes or vials. Both of these look rather boring. What you want to try and get your hands on is milliscale glassware: 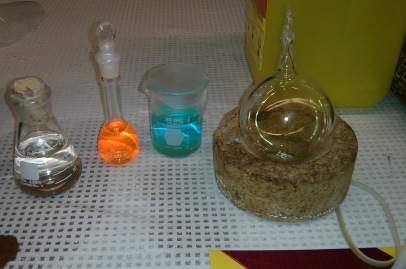 These might be a bit small, there is an elastic in the image for scale, but they come in lots of sizes if you can find somewhere to sell you them. (Shown: A 25 mL Erlenmeyer flask, a 10 mL volumetric flask filled with a Rhodamine solution, a 30 mL beaker filled with something and a fire-sealed bulb). The Erlenmeyer is probably your best bet, as they are easy to seal, and nice and sturdy.

Now, these are less useful to most people, but if you happen to have a chemist in your group:

If you have access to it and don't mind working with something toxic, Rhodamine is the most magical looking liquid I've seen, with a sort of shimmering, magical looking colour that catches the light in very odd ways (Photos don't do it justice, but here is the best I could do: 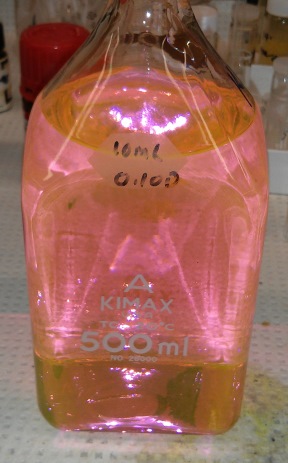 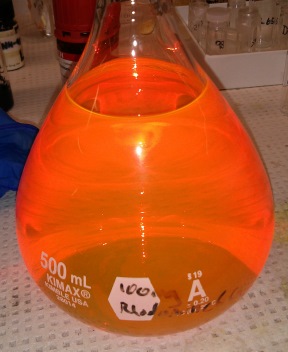 I hear the concentration is something on the order of 10^-6 mol/L, if you are looking to make it yourself. However! Most rhodamine dyes are toxic, so do not drink or handle this, or let your players touch it. But if you are a chemist and wanted to make up some sealed containers of it, that would work nicely. Oh and it glows under blacklight.

Ok, I'm going to include this as it looks like a magic potion for sure. However, DO NOT UNDER ANY CIRCUMSTANCES BRING THIS TO THE GAMING TABLE. Fresh Aqua Regia is a brilliant, brilliant red (Again, my camera can't capture it as well as I'd like, sorry.)

Sadly, while it looks very potion-like, it is a super-acid, and thus crazily dangerous if you aren't careful and wearing protective gear. However, if you just need a PHOTO of a nice potion, that would work quite well if you know a chemist who uses the stuff and has a good camera. (As a note; that batch is just a few hours old and still bubbling, which is why the lid is off.)

Heck: While I'm listing stuff too unsafe to use: Mercury looks damn near magical to people that didn't grow up with it as toys, and radioactive ceasuim chloride glows an unearthly blue (though the non-radioactive stuff is a rather boring colour) that would make a perfect potion, though release of it is...a bad thing.

EDIT: I was browsing the net and came across some excellent photos of florescent dyes mixed with water. That sure looks like a magic potion to me, though again, some of those dyes he mentions are toxic, so make sure you check before using them.

You can get bottles like these in bulk, bulk plastic bottles

There is a company that makes mana, health, and luck potions - I bought a few at Fry's... mana potion

Here is somebody on etsy providing what you want... mana potion set

Sample shampoo bottles from some hotels can be repurposed (drinking from them is not advised).

Air fresheners also have bottles that are 'close' and can be repurposed (again, drinking from them not recommended).

For colour and flavour, use flavour syrups for "make at home" soda machines. Actually, thinking about it, almost anything in the "sauce" aisle at your local supermarket would work.

Avoid dairy. If the potion might be sitting on a gaming table for hours you don't want it going off. Unless you are playing Call of Cthulhu, of course.

For the grand effect, you could try adding smoking dry ice. See this primer.

Not the answer you're looking for? Browse other questions tagged magic-items props potions or ask your own question.

2
Creating a fantasy-style potion as a game prop

14
How can I attain eternal youth through alchemy?
2
What training to I need to craft potions and oils?
5
Can you make several of the same potion at once?
85
What can I do to paper to make it look aged?
5
Can Wizards use potions and magic items with effects from their prohibited schools?
6
How does one create skill-enhancing potions in Dresden Files RPG?
8
What happens to the flask that a potion is contained in after the potion is used?
3
Can potions of Magic Missile be made useful?
2
What guidelines (if any) apply to potions of various rarities?