I'm working on an encounter for my game this coming Sunday. The party is made up of five level four characters.

I want this encounter to be comprised of a group of "Human Rabble", and maybe a "Human Bandit" (or two), led by a human rogue-like character. There doesn't seem to be such a leader in the Monster Manual. So I've tried to create one via the monster builder. This being only my second time DMing, I'm not sure about the makeup of this character. So I'd like to get some more experienced opinions/suggestions. Is the attached monster card a good fit for this scenario? Should I add, remove, or tweak anything?

I don't want the encounter to be "easy" but I also don't want it to be "hard." The group should be able to beat these guys soundly. 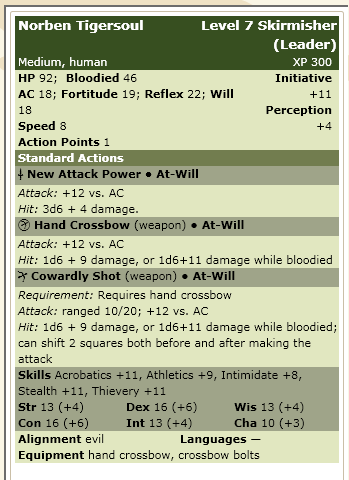 I see that I didn't provide enough detail for the encounter setting.

I don't intend for the character to be recurring, but that depends on how the players play the encounter, I suppose. My plan is for him to be killed.

I want him to be recognizable as a stealthy, underhanded, character. He's basically a middle management guy running an errand for a more sinister, as yet unknown, NPC. So his demeanor/class/style is supposed to be a representation of his boss.

The party is going to be ambushed by him and his underlings whilst traveling. There will plenty of open area for him, and the party, to maneuver. Beating this guy is more of a plot opening than an ending.

The party has a paladin, wizard, ranger, warlock, and a warlord. So there's a good mix of ranged and melee. The players have been playing for about 3 years now, so they have a decent grasp of how to handle things. But I wouldn't classify our group as "power gamers."

OK, From the looks of it, you want the following:

You want this guy

Danjani, He's a L4 Tiefling darkblade solo. Make him a human by making one small change, instead of his racial power give him a reroll on an attack.

That's a tough foe, if you want something a bit more run of the mill, I recommend going the elite route. Kelson is a good monster here.

All that to say, forget the race, focus on getting the powers, level and role right, and then just reflavor the monster however is required for your campaign. 4e monsters are just a set of powers to hang a character on. The name and race rarely matter, just use them as a canvas on which to paint your world.

Yes, but he's barely a rogue.

I think your problem is more encounter design than monster design; this monster will be decent in a frontal assault, but won't necessarily deliver a "rogue" feel; more of a "thug" feel. Consider adding some sort of additional features to him; either the ability to teleport and better abuse his ranged abilities or otherwise some incentive for him to go toe-to-toe, such as explicitly adding Sneak Attack or Backstab to boost his damage against targets who don't focus on him, encouraging an ambush tactic.

However, the monster does look fine, though I'm not sure that I'd use him in combat. Have you compared him with examples of other stealthy foes? He has a heavy degree of field control, what with the ability to move four squares a turn, so I'd be hesitant to put him into a battle where everyone else was stuck with melee combat.

Some things to consider:

Not the answer you're looking for? Browse other questions tagged dnd-4e .

6
How can my party be effective without a dedicated healer?
15
How does disarming a monster affect its statistics?
25
Monster Manual 1 - Is it balanced? Should I balance it?
1
How do I gain access to Perception training as a Hexblade MC Rogue in early Heroic?
1
Ideal group composition
3
How does Changeling Disguise affect your allies?
12
How do you actually crawl through a dungeon in online play?
3
How do you boil a level 30 PC down to an easily accessible NPC or game mechanic?
7
How can I recreate King Leoric as a solo monster for a level 7 party of five?
13
How to politely explain that a player's character doesn't fit the role as well as they think it does?