How can I run a combat on a small sphere?

In an upcoming campaign I'm planning, I would like a combat encounter to take place on a small sphere, with gravity pointing in towards the center. I'd like a sphere about 50' in diameter - something large enough to allow plenty of movement on its surface, but small enough so that players can typically run around it in a few turns.

My problem is setting up the map. My first thought is to purchase a to-scale foam craft sphere, and provide miniatures with small pins so that they stick into the "board." The problem with this, tho, is that I would either need to draw on a geodesic grid by hand or go grid-less, which my group has not done before.

My second thought is to simply use a flat map with "wrapping" edges, so that it acts somewhat sphere-like. The problems with this are that it distorts the distances greatly, and, more importantly, doesn't show the affect that the curvature of the sphere has on line-of-sight. I could get around this by imposing a circular limit to line-of-sight, but I feel it loses much of the effect.

Has anyone attempted to run grid-based combat on a non-flat surface like this? What tools and rules made the combat go smoothly without ignoring important aspects of the unique terrain?

The line-of-sight benefits are not actually very much, if any. If you've every played wargames with model-based LOS, you're familiar with the excruciating process of eyeballing, using bits of string, and finally arguing over whether being able to draw LOS to a teeny bit of the tip of a sword sticking up above terrain counts as having LOS or not.

Using real LOS, you lose much of the time saved by using a grid. Either go gridless on a sphere and measure everything in real inches, or use a flat, imprecise abstraction with extra LOS limits and movement rules to roughly emulate a spherical surface. Besides which, there's no good tiling of squares onto a sphere that doesn't introduce aberrations in how they connect to each other. To get regularity you have to use a different tile shape, at which point you'd have to make up new rules for adjacency and AOE coverage.

A concern exists that LOE and AOE in Krahulik's models, as well as, prolonged combat and movement were not possible in the models documented.

However, both context of Krahulik's efforts and his entries, he notes that the oddites of modeling the grid on the sphere as well as the success of the models in play.

Krahulik talks about "...I was drawing these squares on a curved surface they got sort of wonky in some places, but that is why I made separate [areas] of grid zones on each planet." The photo of these grids clearly shows Krahulik "solving for wonky" with compromises to aesthetic problems by ignoring the curvature of the sphere and scale at the polar coordinates. 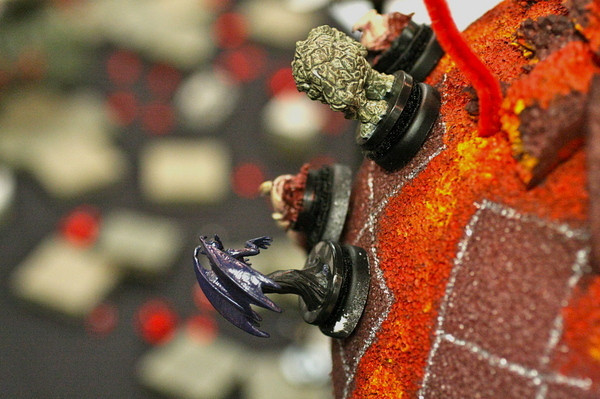 The disconnected grid addresses the "wonkiness" as well as LOS...and likely solved for AOE too (constrained within the "separate areas of grid zones"). Nearby grid zones could be handled as a "hand wave" or even built-in as player-GM expectation.

Both articles are great resources for creatively solving a problem and delivering an exciting table experience.

Read Geodesic Discrete Global Grid Systems by Kevin Sahr, Denis White, and A. Jon Kimerling. I skimmed it, but it offers some great ideas to achieve full coverage with hexagons. The research is quite detailed and expounds at length regarding the popularity and resolution available with hexagons.

On a more serious note, you'd need to sort out how movement would work, and possibly subdivide each patch into 5 or 6 triangles depending on the size of the pieces you're velcroing on.

Additionally, you might want to prop the soccer ball up on stilts so that you could have units on the entire world.

I would print out a flattened geodesic sphere for the minis alongside a printed out and assembled version of the same, using post-it notes or similar to reference where the minis map to on the sphere.

For movement, it's triangles instead of squares. Movement along a side is adjacent triangles. I would probably disallow movement across corners, just to make things simpler.

3d movement in D&D is made by dividing the space in cubes. Each cube that's less than 50% filled is a void space, each cube that's not is all filled. If you build a sphere made of cubes you'll get sections similar to a small circle drawn in Paint.

If you get a sphere, sunlight (which rays are parallel) and a transparent sheet with parallel lines you can trace the projection of these lines on the sphere. Rotating the sphere exactly 90° on the 3 axis of the sheet will get you a gridded sheet. The elements of the grid near to the axes will be squared, and the boundaries between those areas will feature triangular elements.
It's fine, I've explained earlier what they are, corners of a cube. Despite being triangular, they still count as squares.

As an alternative, this really is a cube, but it looks like a sphere

If you are free to alter the dimensions of your planet, you can use any one of these nice projections of a sphere's surface.

Note that most projections lose a lot of latitude squares near the poles.

Now the trick becomes distance to visual horizon. But again the internet provides a handy calculator.

Using this tool, assuming 6' person gives a surface to horizon of 13'. Making an assumption that double that is hidden. So absolute LOS = 26' = 5 or 6 squares. For fun give anyone in squares 5 and 6 a cover save.

Not the answer you're looking for? Browse other questions tagged pathfinder-1e battle-map or ask your own question.

28
How do I make my own battle mats?
15
What happens when you step off the battle map?
21
How do I balance detailed encounter maps with not wanting to give away my dungeon layout?
8
How do you represent sloping topography on a battle mat?
4
How to map out a gang melee with multiple combatants in a tight space (like an elevator)?
4
How to use battle maps in combination with large, open spaces such as a town square
3
How can I get my long-distance friend to share a VTT with me when they have only an Android phone and I have only a laptop?
10
How would adventures be run with traps on maps that show where they are?
5
How to manage party out-of-combat exploration on Roll20?