When using a reach weapon, which squares around me can I attack?

Considering a medium creature, with 5ft of reach, wielding a reach weapon such as a longspear.

With a typical reach weapon, you can strike opponents 10 feet away, but you can't strike adjacent foes (those within 5 feet).

Squares within 5 feet would be all adjacent squares to the creature, including diagonal ones (first diagonal being counted at 5ft).

It appears clear that the weapon will allow attacks into four squares: those 5ft away from the creature in the north, east, south and west directions. They are 2 squares away in a straight line, thus 10ft away, within reach.

But now, what about the squares diagonally away, beyond 5ft, north-east, south-east, south-west and north-west of the creature? According to the rules, the second square of a diagonal line is considered 15ft away when it comes to movement. Does this also apply to attack distances?

Also, what about squares reachable by going diagonally once, then straight up/down/left/right? This would usually count at 10ft of movement, so are they attackable?

In searching for answers to this, I've come across an interesting point on the Paizo forums. If you are in one of the far corners and you consider these not threatened, then you can diagonally move towards the character and never provoke an AOO (that is, per RAW)... and yet, logically, a threatened area should make an uninterrupted circle around the creature. This may explain why 3.5 made an exception out of this.

In searching for answers to this, I've come across an interesting point on the Paizo forums. If you are in one of the far corners and you consider these not threatened, then you can diagonally move towards the character and never provoke an AOO (that is, per RAW)... and yet, logically, a threatened area should make an uninterrupted circle around the creature. This may explain why 3.5 made an exception out of this.

Yes, that is precisely why 3.5e made that exception, and it’s also why Paizo issued an official FAQ that changed Pathfinder’s rules to add the same exception, as @caps reports in this fine answer that you should go upvote.

Before the FAQ change

However, the FAQ entry that caps reports did not exist at the time this question was asked. At that time, you did not get the four corners, and so could only attack these \$X\$’s from \$C\$:

Here, it would appear that someone could step from \$A\$ to \$B\$ to avoid an attack of opportunity altogether. However, even before the FAQ just changed this to be like 3.5e, the developers at Paizo had ...for lack of a better word, we’ll call it a clarification, though it honestly just confused me more. From an earlier FAQ:

Can you or can you not attack diagonally at a distance of 2x squares (15'=10' exception) with a reach weapon?

James Jacobs: Nope. A reach weapon gives a specific extension to your reach. When you count out squares, since every other square is doubled when you count diagonally, that means that there’ll be corners where you can’t reach.

Sean K. Reynolds: It's an artifact of the grid. The closest the rules come to addressing this is in Large, Huge, Gargantuan, and Colossal Creatures, which says:

So just because the grid has a square for "15 feet away" and a square for "5 feet away," but no square for "10 feet away," using that corner path doesn't mean you're magically teleporting from 15 feet to 5 feet; you are passing through a 10-foot-radius band around the creature, and therefore you provoke an AOO.

Admittedly it's not clear, and obviously it doesn't have the diagram in the 3E book to provide a non-textual example, but it's supposed to work as I described above.

Presumably, you would have adjudicated the enemy’s position for the purposes of the attack of opportunity as being \$A\$, though this was never made clear. In this sense, the end result was identical to the 3.5e/post-FAQ version for movement towards you: creatures leaving that corner square to enter a square inside your reach provoked an attack of opportunity as if you threatened that square. You were not eligible to make an attack of opportunity if the enemy performs any other action that provokes from \$A\$, including movement in other directions, because you do not actually threaten it.

This was a headache. Even before the FAQ changed things to match 3.5e, that was precisely what I recommended:

Reach weapons are one of the few fairly-nice things that melee can get. There’s really no need to nerf them. I strongly suggest that you straight-up ignore this nonsense and use the 3.5 rule. The exception to the usual calculation of ranges in the case of reach weapons is weird, but clearly there was a good reason for it: without it, you wind up with this mess.

Paizo released a FAQ last December that changed Reach Weapons to threaten "the second diagonal" (which is technically 15 ft. away).

From Paizo: "The Rules Reference Cards are correct. As an exception to the way that diagonals normally work, a creature with 10 feet of reach threatens the second diagonal. These changes will be reflected in the next errata." https://www.d20pfsrd.com/gamemastering/combat/space-reach-threatened-area-templates/ 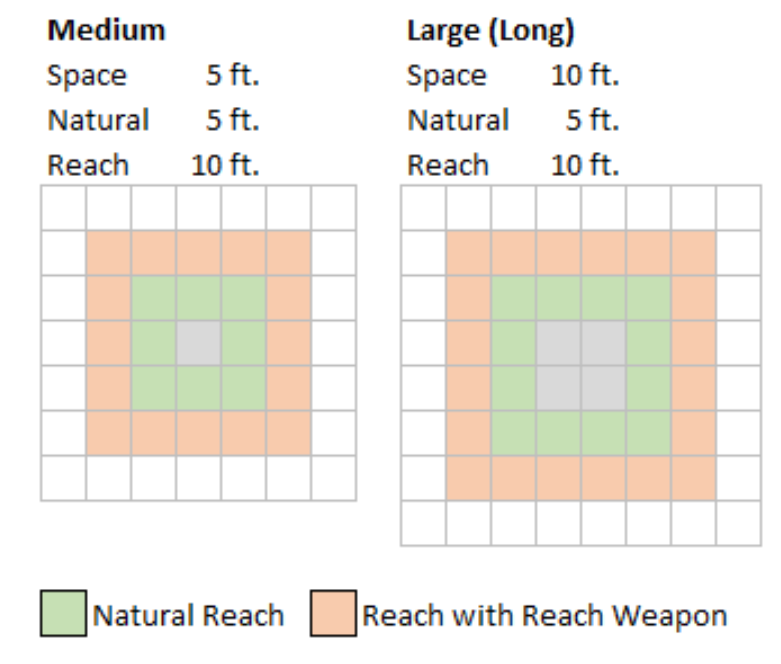 You lose some corners for longer reaches.

The lavender-and-green graphics toward the bottom of this page exactly illustrate how reaching on a diagnonal works.

In reference to the FAQ comments by James Jacobs and Sean K Reynolds, I believe they are 100% compatible with this diagram:

Regarding differences for creatures that're long instead of tall, the lavender-and-green reach charts toward the end of the page give examples of both. Essentially the only difference is that long creatures tend to have less reach than a tall creature of the same size.

The rule reference that you're looking for is found in the 3.5 player's guide(not sure what page) under the section on attacks of opportunity.

Quote taken from the SRD

Note: Small and Medium creatures wielding reach weapons threaten all squares 10 feet (2 squares) away, even diagonally. (This is an exception to the rule that 2 squares of diagonal distance is measured as 15 feet.)

Not the answer you're looking for? Browse other questions tagged pathfinder-1e combat opportunity-attack reach .

6
Can creatures attack anything within their natural reach?
5
Ride-by attack with a lance

18
If an enemy moves and provokes an opportunity attack, where are they when the AoO happens?
6
Can creatures attack anything within their natural reach?
8
AoOs against the same enemy on his turn?
11
Do creatures with inappropriately sized reach weapons threaten different areas?
1
How does a Flaming Sphere's movement work?
6
Clarification on Reach vs Threaten range
3
Which squares can be targeted when using a reach weapon, Lunge, and Whirlwind Attack?
10
Medium PC, Huge Mount: Where do I sit?
5
Ride-by attack with a lance
2
Notion of adjacent and natural reach for large creatures or more